It is hard and mucky work but what emerges from the heat and the dirt could and, indeed does, grace the finest tables in the land. For the gently spoken alchemist who emerges from his well-ordered workshop tucked away at the back of an industrial estate in Sturminster Marshall is Nick Stevenson, Her Majesty’s tinsmith.

As recommendations go the unmistakable crest and those hard-earned words ‘By Appointment to…’ are unsurpassed. Copper bottomed in fact. Appropriately so as Nick has re-tinned the Royal household’s copper cooking pots and pans for more than 25 years.

That Nick, a fourth generation tinsmith, works in the old-fashioned way using a hand-wipe finish is no surprise – it’s what got him the Royal job in the first place.

‘This was the early 1990s and Buckingham Palace was not really into modern ways of doing things in those days,’ he says, smiling as he recalls the day a well-spoken gentleman had called to ask if he would come to central London to discuss re-tinning some copper cookware.

‘I was friendly with a woman at the Savoy Hotel and had done some work for her. I didn’t realise at the time but she knew this person at Buckingham Palace and when he asked if she knew of anyone who could re-tin copper pots she recommended me.

At the subsequent meeting Nick was asked a lengthy series of questions then invited to meet the then Royal chef, a stern-faced man who took the business of cooking with copper extremely seriously.

‘He showed me to a strong room that was full of copper pots and pans, more than I had seen in my life. Then he showed me some pans that had been worked on by the previous tinsmith and asked me what I thought – some were perfect some were poor, and I told him so. Then he asked how I worked and I told him I use the old-fashioned hand wipe method and his eyes lit up – ‘Young man,’ he said. ‘That’s exactly what I want to hear.’ He gave me a pan to work on as a sample and said if he liked my work he’d like me to quote for the pans in the room.’

Within weeks that’s exactly what Nick was doing. He asked for all the pots and pans to be properly measured so as to provide an accurate quote and within a few years he was working without the need to quote in advance.

‘I must have been into my sixth year of working for Buckingham Palace, by which time the chef and I had become good friends, before I plucked up the courage to ask him how I would go about getting a Royal Warrant. He immediately made some phone calls and the form arrived a week or so later. There were about 20 pages of questions, including one that asked if I had ever been a terrorist.

‘It all went quiet after that so I phoned to ask what had happened and was told it can take a while as it has to be signed by the person who uses my services – in other words it had to go before the Queen. When it finally arrived in a tube I took it out and couldn’t stop looking at it; I kept coming back into the office to check that it was real.’

His pride is undiminished by the passing of time – ‘I would be distraught if it was taken away,’ he says. Every five years his work is reviewed but providing he continues to deliver high quality work in a timely fashion Nick can reasonably expect to hold the Warrant indefinitely. He has worked on Prince Philip’s personal sauté pan and hundreds of historic pots, the oldest dating from 1736, from all the Royal residencies.

However, there doesn’t appear to be a fifth generation waiting in the wings to take up Nick’s work.

‘I was a young man once and I got fed up with tinning and went to work in other areas. We moved to Poole in 1982. I set up this business in 1985 and it was tough, I didn’t pay myself any wages for the first six months. I’m nearly seventy now and I can’t do this forever, but neither of our two boys is interested.

‘When we were young, my younger brother Danny and I used to be in awe of what our father did. To us it seemed like magic, he wiped on this shiny material like liquid and made battered old pots sparkle again like new. We used to pester him in his workshop and all he’d say was: ‘Watch and learn; watch and learn.’ That was his favourite expression. Eventually he let us do the grafting – the hard work of washing and preparing the pots, hammering out the dents, making the surfaces smooth – before he applied the tin.’ 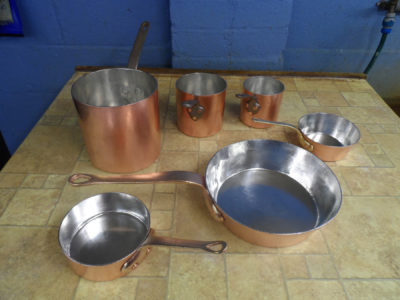 It takes time to prepare a pan for tinning. First it must sit in a degreasing tank for a day or two to remove the carbon and baked on residues. Then it is washed and hammered out on the anvil so that the bottom presents a flat surface to the stove before a scurf mop on the polisher is used to remove the old tin. The pan is soaked in pickling acid for 12 hours and washed again and a barrier cream applied to the top of the outside edge to prevent the molten tin dripping down the side. Then it is heated to around 500˚F before a tin ingot is melted around the inside and smoothed with wool before being quenched in water.

‘I can’t say I’m as in love with work in the way I used to be, but I still get a buzz taking a battered old pan that looks like it’s fit for the tip and making it like new. The best bit is the customer’s face when they come to collect their pans, the new shine means I see their faces literally light up when I show them.’