Her paintings invoke a magical, mystical, mythical world in which absolutely anything is possible. These are views that are slightly out of reach, just over the hill or around the corner – at once some place and no place, everywhere and nowhere.

Lesley Slight has been painting her distinctive capriccio landscapes ever since she arrived in Dorset with her sculptor husband, Nigel, 45 years ago. None of the views actually exists. None of the individual elements in the paintings exists – not even, it transpires, in the mind of their maker. ‘I start by covering the canvas in a mixture of paint,’ she explains in the airy confines of her viewing studio next door to her cosily atmospheric painting room in a converted doghouse on a farm near Toller Porcorum. ‘Then I start to push the paint about a bit and from that something will emerge. I use a medium linen canvas as I don’t want it to be too smooth, but I have no idea when I begin of what the painting is going to be. If I like what I’m starting to see, I’ll carry on and find out where it takes me; if I don’t, I’ll paint over it and start on a new one. It’s not very disciplined, but that’s the way I work.’

The only circumstance in which Lesley’s method varies at all is when she paints one of her distinguishing single trees – arboreal portraits of imaginary subjects – and even then she doesn’t know the season the subject is shown in, whether it’s a whole tree or a split tree, in full leaf or not, or even what kind of tree it is. ‘They’re trees, that’s all,’ she says calmly. ‘Some of them look a bit like oaks, but they’re not oaks. I’ve no idea what most of the trees in my paintings are other than that they are trees. I love trees, they have so much to tell us.’

By happy accident, Lesley became a member of the Arborealists painting group when its founder, curator and artist Tim Craven, saw some of her work at the Art Stable gallery in Child Okeford and instantly asked the owner, Kelly Ross, whose it was. ‘Tim is this unstoppable ball of energy. He’s never still. He wanted to get me involved because a lot of my paintings involve trees and the group is all about trees. So I have exhibited work at four of their exhibitions, including one in France, and have at least two more dates next year. It’s quite exciting.’ 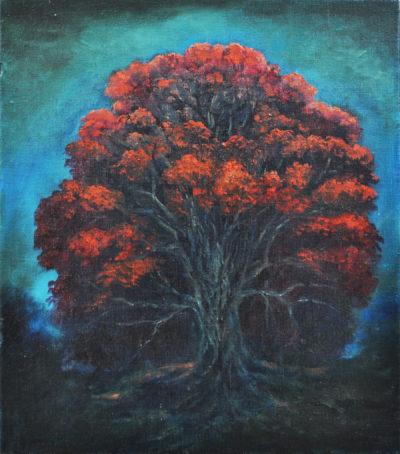 To those with an eye for such things, Lesley’s paintings betray their roots in West Dorset in the way the light plays across them to reveal the venerable woods, timeworn paths and little fields that tumble down to the sea from plump hillocks. Above them the sky – sometimes clearer than others but never exactly cerulean. There’s nearly always a suggestion of mist and light coming or going.

The landscapes are not untouched by human hand, but there are no people in Lesley’s paintings. ‘Animals maybe, but never people, never. Definitely not,’ she affirms. ‘I have paintings called ‘Sunday walk’ and ‘Evening walk’ so I’m assuming people might be along presently, but I seem to find my landscapes before the people arrive or after they’ve left and taken their rubbish with them. There are paths and trails as well, although I’m not always clear if they’re man-made; they might be animal tracks, I suppose. It will make me sound depressing, although I’m not a depressive person, but I do have this dystopian view of what we’re doing to the planet and nobody who is in a position to do anything about it seems in the least bit willing to. I think that view is certainly there in the spirit of the paintings.’

Lesley grew up in Somerset and went to college in Nottingham, where she and Nigel met and married, then moved to London, had two children and moved to Dorset in 1973. (Their daughter Jane, better known as Sweetpea, has been attracting glowing reviews for Get Me the Urgent Biscuits, her memoir of 20 years as assistant to maverick West End producer Thelma Holt.) ‘By a series of unplanned incidents I ended up spending twenty years designing and making leather bags, belts and gloves,’ says Lesley, ‘including the gloves presented by the Worshipful Company of Glovers as a wedding gift for Princess Diana. Well, she never wore gloves of course, but it was still a good thing to have on my CV. Some of that work is in collections at the V&A and other museums, but I was very glad to get out of that world. It was incredibly tension-making, always having to worry about orders, exports and that sort of thing.’

She was far happier painting and continues to be so, working prolifically with absolutely no intention of stopping. ‘I mean I don’t have to go far for inspiration, do I? The woods are at the end of the garden, there are magnificent hills all around, fields. The sea is not far away, the sky above, the soil below. I’m sure I must absorb it all and it comes out in the paintings.’ 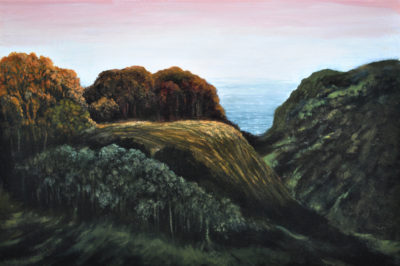 But given that the landscapes are figments of Lesley’s imagination that emerge from a confusion of colour on her canvas, are they ever finished? ‘Well, I hesitate to talk about anything being finished,’ she confides. ‘I get to a place where I’m OK to leave a painting and even then I see things I could improve, but it’s a fragile thing, a brushstroke or two could ruin it. The best thing is to go away and start something else then come back to it and see if I still feel the same. But I can’t have lots of canvasses on the go at once; that would never do. I have to focus on the work in hand.

‘I can see paintings that I made ten years ago and think how I could make them better or see things that I would do differently. It’s important to resist the urge to change them, though, because that would be a different me coming back to them –ten years older with ten years of new experiences. The works belong to a time and place in my life and I have to respect that.’