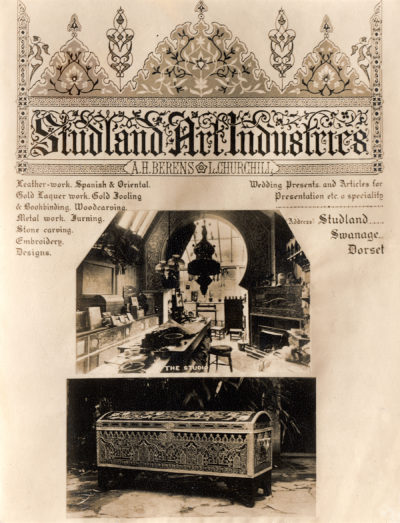 He was an Old Etonian, cultured, patrician and well-travelled. She was a clay-cutter’s daughter from Goathorn who rarely, if ever, left Purbeck. In the first half of the 20th century they made a treasure trove of artisan crafts that a century later is largely forgotten, but for two examples held by the Victoria and Albert Museum. By the time the artist, Alexander Hellier Berens, settled in Studland at the dawn of the 20th century, he had already lead a colourful and eventful life. Born in 1865, he was schooled at Eton but insisted on following his own path and trained as an artist, sculptor and leatherworker in France and Belgium before travelling throughout Africa (with the heroic explorer and academic, Sir Richard Burton) and the Far East, supporting himself by working as a cowboy, ship’s steward and private detective, as well as through his artwork.

In 1893 he married and went to live in Morocco, but his first wife died just three years later. He married again in 1898 and he and his wife Violet moved to Studland, where they bought the freehold on a cottage in Beach Road, named it the Full Stop and set about renovating it with Moorish flourishes. True to its name, he stayed there until his death in 1959.

From at least 1901, when the census records her as parlour maid, for most of that time Berens’s housekeeper and artistic partner was Louisa Churchill, who lived in a wooden bungalow on the site. By extreme contrast to her employer, she was born in 1880 in Goathorn, the seventh of nine children. Her father, William, cut clay and brought his family up in two rooms with her mother, Ellen, who went to live with her at the Full Stop after he died in 1911.

In line with the ideals of the Arts and Crafts Movement, Berens trained a range of Studland villagers in various art forms from book-binding and gold lacquer work to stone carving and metalwork, but his star pupil was Louisa and together they set up Studland Art Industries as a business venture to encompass his painting, engraving and carving as well as the leatherwork that produced embossed bags, purses, pouches and cases. Although not widely known, there is a small collectors’ market for the distinctive work and a leather-covered letter box and a pair of decorated leather-covered wooden bookends are in storage at the V&A.

Louisa was the great-aunt of local author and historian Joyce Meates, who has been secretary of Studland Local History Group since it began in 2005 and curates its archives. She also owns several pieces of work produced by Studland Art Industries as well as some of Berens’s paintings. ‘Aunt Lou loved being at The Full Stop,’ says Joyce. ‘To tell the truth, she had a bit of a soft spot for Mr Berens. She never married and I think her heart belonged to him, so nobody else would do.’

Berens carved designs on wooden blocks and Louisa would work the leather over the blocks, then emboss it with a hammer. Some designs were subsequently painted or overlaid with gilt. ‘As well as the leatherwork, she did a lot of embroidery for which she won many certificates, exhibiting in craft shows at Dorchester. She also did gold lacquering and they made large decorated screens and picture frames. There was a time when nearly everyone in the village had one of these box purses – Aunt Lou always used to give us something as birthday or Christmas presents. I was only nine when he died but I remember we used to go down to the studio and Mr Berens would always ask how we were. When he died, he left instructions that Aunt Lou could stay in her bungalow on the site for the rest of her life.’

Berens and Louisa were obviously close and their names enjoyed equal billing on company letterheads and advertisements. Although it is unclear how successful Studland Art Industries was as a business, for many years the Berens would only employ members of Louisa’s family – her sister, Mary, was the cook and her niece, also Louisa, was a housemaid. Mary took care of another niece, Zorah, and her second husband, George, later became the gardener, but not before they had adopted a third niece, another Violet, at the age of 14 months. ‘Aunt Lou contributed to Violet’s upkeep after her father, their brother Henry, was killed in 1917 and his widow, Minnie, overcome with grief and pregnant with their eighth child, went out one night and was found dead in the morning. It was always said in the family that she died of a broken heart.’

As she grew up, young Violet was also taught leatherworking skills in the hope, perhaps, that there might be a second generation of Studland Art Industries. But it wasn’t to be. Louisa died in 1965 at the age of 84 and even though she was being taken care of by family elsewhere in the village, she made sure she visited the bungalow every day until the end. ‘She was a tiny little lady, but she must have made quite a big impression on Mr Berens,’ says Joyce.

Indeed, for long after Studland Art Industries had run its course, Louisa remained close to her friend and mentor even as his protégé, the artist Elizabeth Armsden, shared his studio from the 1930s and learned his unique colour etching process. They went on regular painting trips around Dorset in her car, following the novels of Thomas Hardy. Her etchings are now increasingly collectable and several pieces are held by Swanage Museum.

Artists had been coming to Purbeck at least since Turner passed through with his sketchbook in 1811, but few ever took root like Alexander Berens and involved themselves in the local community. After attending Baden Powell’s first Scout camp with his daughter, Iris, on Brownsea Island in 1907, where he taught camp-craft and nature observation, Berens returned to Studland and founded his own troop, 200-strong, that he housed in the grounds of the Full Stop in a large wooden hut. The boys were tutored in carpentry, bricklaying and woodwork, skills they were able to put to use working on the house. Later, when war broke out, many of the boys enlisted, as did Berens. He was posted to the Isle of Wight for training, where he damaged his leg in a road accident and missed being sent to France.

Berens was also a skilled equestrian, training and breaking in his own horses, and before the outbreak of war would drive a four-in-hand carriage with a team of donkeys, sometimes as far afield as Sherborne. His other animal companions included an injured crane for which he made a wooden beak, a tame puffin, a green monkey, a white rat and a timber wolf.

Following Berens’s death in his 92nd year, the Full Stop was sold to a local solicitor who converted it into a hostel for ministers and missionaries and changed its name to Sandyholme, where future MP Michael Meacher was a regular visitor. Today it is operated as a charitable enterprise for disadvantaged and church groups by Bournemouth YMCA, which is raising funds to explore its history more fully. ‘Studland Art Industries jumped into existence right at the start of the Arts and Crafts Movement and for a time would have involved a lot of people from the village; we’re only just catching it by its coat-tails before it disappears for ever,’ says researcher Sheila Niven.

The project aims not only to detail the story of the building and the one that preceded the house that Berens bought, but also the people who lived and worked there. Two almshouses, thought to be a gift of the Bankes family, are shown on a 19th-century map of the site and there were other buildings on the plot in Berens’ time, including Louisa’s bungalow.

‘There is a story that Berens bought the house unseen from an advertisement in The Times, but that seems likely to be a local myth,’ adds Sheila. ‘He had friends in the area and there’s a painting of his wife, Violet, at Church Cottage, where the family apparently stayed while renovations were being carried out on the Full Stop, we think by the Swanage builder, George Hardy.’

Berens had a notable collection of embossing tools and instruments and there was a large case of carved wooden blocks for leatherworking, none of which are thought to be extant. ‘But you never know what’s out there. We’d love to hear stories, or see any images, photographs or documents that relate to the Full Stop, Sandyholme or the building that was there before it.’

It is hoped that the stories will be published on a dedicated section of the Sandyholme website that will also be linked to Dorset History Centre. To contact the Sandyholme history project, email sandyholme@gmail.com