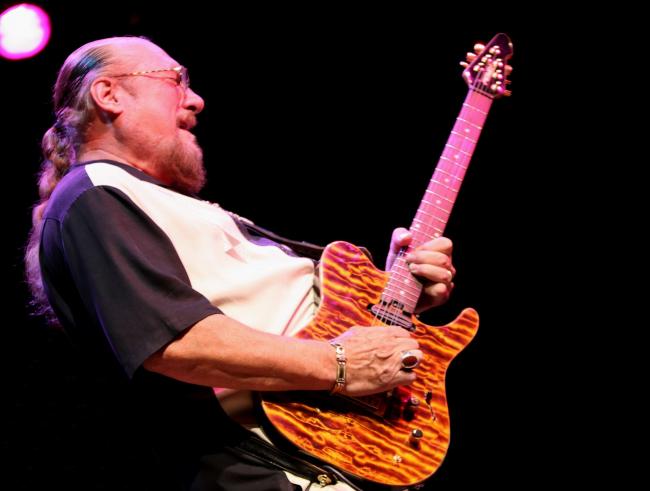 Whatever the official billing, this is the return to Wimborne of that most unlikely of pairings – the Animals and Steve Cropper (right), house songwriter/guitarist from the heyday of Stax Records, home of southern soul giants such as Booker T and the MG’s, Otis Redding, Eddie Floyd and Sam & Dave.

Lest we forget, the Animals spearheaded the British Invasion of the USA, paving the way for the Beatles and Stones.

They’ve more than earned their place in the Rock and Roll Hall of Fame and they can still pack a punch as faithful renditions of their hits survive the weight of their own baggage, including – surprisingly – The House of the Rising Sun.

Founder member, drummer Jon Steel drives from the back of the stage, aided by the effortlessly cool Mickey Gallagher at the keyboards and ‘new’ boys, bassist Scott Whitley and front man Danny Handley, whose powerful voice and rasping guitar serve to rough up the reminiscing with some much-needed grit.

But the set only hints at the magic that happens when Steve Cropper quietly takes the stage.

Revered by guitarists and soul fans alike, but spared the deification afforded the likes of Eric Clapton, Cropper is a class act.

The other musicians sense it too and suddenly everyone plays a little tighter, games well and truly upped as Cropper plays for maximum impact with minimum fuss.

Faultlessly generous to his fellow musicians and resolutely modest about his career, he tells the story of co-writing (Sittin’ on) The Dock of the Bay with his friend Otis Redding, but leaves out how he went back to the studio after the singer’s death to finish it as a lasting epitaph.

Entrusting the quintessential sixties groove, Green Onions, to the eminently capable Gallagher, the band hits its stride with an awesome take on the Wilson Pickett hit Ninety-Nine and a Half (Won’t Do), 634-5789, Water, Hip Hug Her and a scintillating tear-up of Soul Man that brings the audience to its feet to complete a living testimony to the enduring power of sweet soul music.