Nick Churchill > Interviews > Ben Waters: From Upwey to the stars 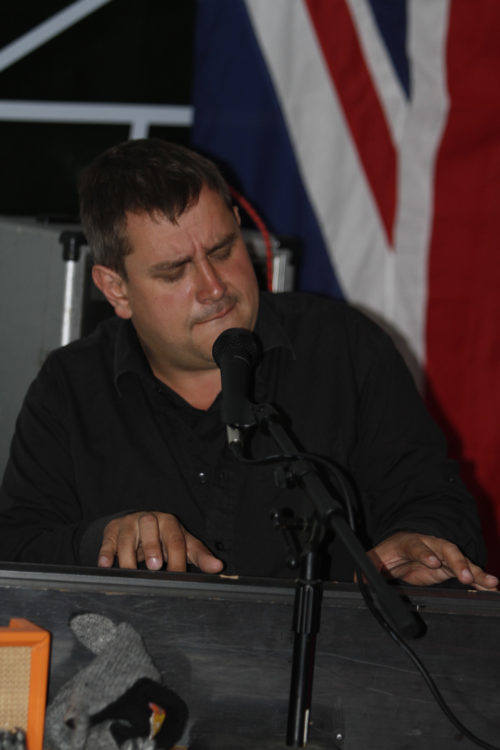 For more than 25 years he’s travelled the world earning a crust playing boogie-woogie piano. Now Ben Waters is one of Britain’s most sought-after musicians, but with no obvious cultural or geographical connection to the United States’ Deep South, how did an underachieving schoolboy from Upwey in the early 1980s even get to hear the music that has become his life, let alone master it?

‘It was all down to the company my family kept so I was incredibly lucky in that respect,’ says Ben. ‘There was a lady called Val Crabb who ran the Hope and Anchor pub in Bridport. She was friends with a boogie piano player called Diz Watson who had a band called Diz and the Doormen who used to come down to Dorset once a year to play a round of gigs in Evershot village hall on the Friday, Rampisham village hall on the Saturday and finish off at West Bay on the Sunday lunchtime. They’d bring all these other rhythm and blues bands like Juice on the Loose, the Balham Alligators with Geraint Watkins on piano and Rocket 88, which was Ian Stewart’s band. He was the pianist who formed the Rolling Stones with Brian Jones and an incredible man.

‘We’d go along with my uncle and aunt Ray and Eva, Polly Harvey’s mum and dad, and all through the weekend there’d be musicians hanging around their house. I was transfixed by the piano players and got them to show me how to play things. I wasn’t very good at school, but this was something I could do, it was like a drug to me.’

It clearly did Ben’s cousin no harm either – as PJ Harvey, Polly has two Mercury Prizes and an Ivor Novello Award to her name.

‘Dorset is buzzing with live music and it’s a really good standard as well,’ says Ben. ‘That’s how it’s similar to New Orleans or Memphis; it has the same kind of laid back feel. There’s a relaxed-ness about the way the music is played, you can hear it in Fats Domino it’s an easy style, nothing forced or frantic. It’s what I aspire to in the way I play and that’s a Dorset thing.’

Ben also points to a certain insularity that makes it difficult to impress locals. He recalls playing a busy show with West Dorset jump blues institution Custer’s Last Blues Band at the Hope and Anchor in the days when Polly used to rehearse upstairs and pay her keep with a free gig at the end of her stay.

‘Custer’s had a great local following and still do, so the place was heaving. There were these two old boys sat at the bar, as I suspect they would be every night of the week, and one of them turns to the other and says: ‘Packed ’ere tonight.’ To which the other says: ‘That ain’t nothin’ ’pared to when PJ Proby waz ’ere las’ week.’!’

Having played alongside some of the biggest names in rock ’n’ roll, including Chuck Berry, Jerry Lee Lewis, Ray Davies, Pete Townshend, Paul Weller, Mick Hucknall and the Rolling Stones (in 2011 Ben put together the album Boogie 4 Stu, in tribute to Ian Stewart, all the Stones played on it as did Polly Harvey, Jools Holland and Rocket 88), that Dorset imperturbability has been sorely tested in Ben’s career.

‘I realised a long time ago that most of the people that approach me to play with them do so because they know what I do. Nobody’s going to ask me to learn Rachmaninov so I’m usually within my comfort zone. I’m more concerned with how it sounds and that’s the same whether it’s the Fox Inn at Corscombe, which sounds perfect, or the Royal Albert Hall, which is a big echo-y barn. I just want to do the gig, have a cup of tea and come home.’

Home for Ben, wife Ruth and children Tom, 14, and Molly, 12, is the beautifully worn 18th-century Watercombe House, not far from their previous home in Owermoigne and not a lot further from where he grew up in Upwey with his parents who now live at Watercombe. He and Ruth also have a travel business running small group trips to interesting destinations and there’s the annual Watercombe Festival to organise, but music is very much the family business, especially now that Tom and Molly are performing.

‘I’ll be redundant before I know it,’ laughs Ben, only half joking. ‘Molly has a great voice and is playing the piano now as well. The way Tom is with the sax is just like I was with the piano at his age. He’s always on YouTube looking at different players, Willie Garnett from Rocket 88 is his absolute favourite so that band is now influencing its second generation of Waters. Tom sits in with the band all the time, but Molly’s not so keen on travelling – driving 14 hours to get to a gig, that’s not for her.’

Ben will much more readily admit to his good fortune (rather than his unimpeachable talent) putting his success all down to a recording that he made in a studio in Powerstock at the age of eighteen with his friend Dave Hatfield on double bass.

‘He just pressed record and left the tape recording for 45 minutes. We did 10 or 11 numbers, loads of mistakes, me singing flat, really rough. The next thing I know he’s turned up with a thousand CDs. ‘It’s OK we don’t have pay for them for a couple of months,’ he says. I said: ‘Pay for them?’ He actually did me a favour and before I knew it he was sending them everywhere, even Radio One.

‘John Peel and Andy Kershaw started to play it they loved its honesty and authenticity. That tipped off Loose Ends on Radio 4 and Paul Jones on Radio 2. I was asked to audition to replace Chris Holland, Jools’ brother, in the Shakin’ Stevens band, got the gig and for a while my ego allowed me to think it was because Chris thought I was really good, but of course he wanted to get out of it so he could join his brother’s band!

‘That was 25 years ago and I’ve been playing for a living ever since. I spend half my life travelling, I’ve seen some stunning places, but I love coming back to Dorset, there’s nowhere else I’d rather be.’