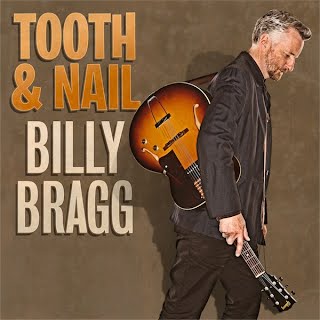 It’s nearly five years since Billy Bragg’s last album, 2008’s Mr Love and Justice, and much has changed. The flag above Downing Street has changed hue, the banks don’t even pretend to be on our side anymore, public sector pensions are now worth as little as those in the private sector, British forces are out of Basra, but not yet home – you could say they’re stuck between Iraq and a hard place.

All of which – and much more besides – has doubtless exercised the mind of the Bard of Burton Bradstock. However, it is to the personal rather than the overtly political that he has turned for his latest foray into the recording studio.

And what a return it is.

Made in five days in the basement of producer Joe Henry’s home, it’s alive with the sound of an oak-aged singer songwriter doing what he does best – singing the songs he has written. Recorded with Henry’s regular sidemen – Greg Leisz (guitar), Patrick Warren (keys), Jay Bellerose (drums) and bassist David Piltch – that only met Bragg on his arrival in the studio, the songs have an immediacy and charm that is only partly due to the complete absence of vocal overdubs. What we hear is what was sung.

And it turns out Johnny Clash is a pretty good singer! Live, he’s always managed to inject his songs with more than their ration of passion, but the recorded Bragg sometimes sacrificed a little feeling on the altar of vocal precision.

Here though we are treated to a series of sterling vocal performances, from the heavy sigh of album opener January Song, through a heartfelt reading of Woody Guthrie’s I Ain’t Got No Home to the achingly sad Goodbye Goodbye, which laments a passing, bidding farewell to family, friends and loved ones as the last stone has been rolled away. For me, Bragg’s greatest success as a lyricist has been in articulating the way we relate to the world.

His words invoke emotions we identify with, they perform open-heart surgery on the lovelorn and care worn – and Goodbye Goodbye is among the best songs of his career.

The struggles chronicled on Tooth & Nail are no less noble than those he wrote about on more political records like England, Half English. In fact, they may be more so. Swallow My Pride finds him turning to classic southern soul music (familiar turf for producer Henry) with a clutch of Steve Cropper guitar licks and an Otis-inspired 6:8 ballad about a man who wants to patch things up and go home. Chasing Rainbows inhabits similar territory – conceding his own shortcomings and being glad anyone would put up with them.

The wry Handyman Blues and earnest Do Unto Others recall songs like The Short Answer and Honey I’m A Big Boy Now as Bragg sifts through his practical failings on one then creates a cock-eyed Cockney Americana knees up on the other.

Elsewhere, we get a quiet menace on There Will Be a Reckoning and the ringing chords of No One Knows Nothing Anymore, the songs that perhaps most obviously invoke the spirit of the Mermaid Avenue sessions that Bragg has said Tooth & Nail acts as a follow up to.

Listening to the record a couple of times you get the sense of loose ends being tied, a few strands coming together, the sound of resolution perhaps. There are moments of acceptance as well as defiance, but above all there’s a feeling of significant people and time having passed.

The album closes with a brace of songs that encompass the many shades of love and faith that have preceded them – Your Name On My Tongue, a yearning devotional that channels grief and fear as well as unconditional love (in an echo of The Only One) and Tomorrow’s Going To Be a Better Day, in which Bill berates the misanthropic merchants of gloom with a broadside of middle aged optimism delivered by a shamanic socialist, a courageous lover of hope and positivity, rather than the doom-laden prophets that inhabit the liberal left.

Billy Bragg is forever questioning his role, examining how he does things, Tooth & Nail is the latest evidence that remains firmly on the right track.