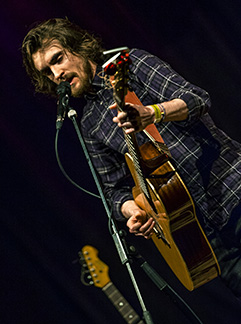 You’ve got to love a village hall… The original social network, back when tweeting was what birds did and a hashtag would probably arouse the suspicions of the Drug Squad, village halls, community centres and social clubs were places of gathering, learning, communing, exercising and generally getting together. From kids’ parties to polling stations, yoga classes to Christmas pantos, traditionally these were collective spaces, run by us all for us all. Powerful stuff.

And, whisper it who dares, they still are…! How else would one of Britain’s most assured young songwriting talents wash up in a village hall in North Dorset on a Sunday night… for a return visit?

“Hello Marnhull, it’s great to be back,” says Blair Dunlop as he enters the fray, before adding: “I’ve always wanted to say that.”

He’s well aware of how that would sound to those that play the Fame Game, but step outside of all that nonsense and this is the stuff that really matters. It’s not about being a star it’s about being as good you can be. It’s not the instant fix of radio hits, showy promo vids and celebrity goss; it’s the honing of a craft, living a life and relating it to people in the hope it speaks to them. Concentrate on the art and let everything else take care of itself.

The cynical churn of the mass market pop factory is nothing new, but the presence of youthful refuseniks and grey-haired refugees from the safety of Sunday night telly in the same room suggests its dead hand has yet to hold an entire nation in its grip.

Paving the way for Blair Dunlop’s warm-hearted return, young Somerset singer songwriter Kitty Macfarlane ably demonstrates the promise that has excited the folk world and earned her a series of solid supports. Her debut EP, Time & Tide, was recorded with Sam Kelly, Ciaran Algar and Lukas Drinkwater among others and features prominently, most memorably the rolling Wrecking Days which closes the set by calling out to the stories washed up as debris on the Cornish coast. For now Kitty’s crystalline delivery craves the patina of experience, but there’s no doubting her ambition – much kudos for tackling Tim Buckley’s irresistible Song to the Siren in the face of Liz Fraser’s This Mortal Coil version.

Making plenty of waves in his native Australia, Jack Carty has three albums to his name, an easy stage presence and a bag full of openhearted, honest songs about the way we are. What Am I Gonna Do With All My Love Now? asks one of the highlights of his most recent long player, before going some way to answering the question in Wedding Song and, finding the audience firmly on his side, delivering a more than creditable bonus version of Jeff Buckley’s Lilac Wine.

The newly married Carty makes no bones about being up to his neck in misty-eyed bromance with Blair Dunlop and the banter the two enjoy before, during and at the end of the latter’s set creates a mood that’s closer to private party than regular gig. We find Dunlop in generous, playful mood, larking about with his bandmates – the prodigiously talented Jacob Stoney on keys and Fred Claridge on drums – creating the space for them to show their chops as they make room for his songs to reach beyond the recorded versions on new album Gilded. 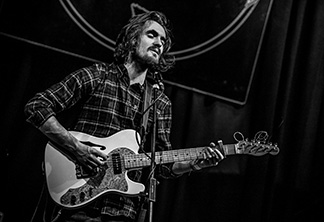 The singer’s uneasy relationship with the digital age is given full vent as he plays with dynamics and floats on delicious piano lines in the stunning Eternal Optimist. As with much of the new record it’s a song that places him outside the firmament of the bright young folk things with which he is often associated – it knows its Fleetwood Mac as well as its Ewan MacColl – a sense that continues with the Porsche-praising 356 and the affecting Up on Cragside. The personal and political are frequently entwined and not only do First World Problems and No Go Zones nail the social commentary the latter in particular showcases some stunning guitar playing. Castello conjures castle walls and Manchester rain paving the way for older material like Blight and Blossom, Fifty Shades of Blue and the rollicking 45s to find a second wind, before Jack Carty is invited back for the encore and it’s all over. For now.

With apologies to Tony Joe White, a Sunday night in Dorset… and not a sad refrain in sight.