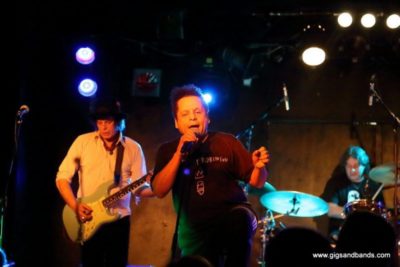 It’s asking a lot to find greatness on a cold, wet Sunday night in the back streets of Ashley Cross. It’s asking even more of a 72-year-old singer songwriter who has already battled through delayed flights from New York, a rushed Radio 2 interview in London and a typically tardy Sunday train ride from Waterloo to get to Mr Kyps in the nick of time to deliver it.

And yet, not only does the distressingly sparse but wildly expectant crowd find greatness among us we find it has plenty of room to spare.

That Garland Jeffreys does not enjoy a bigger cult status in this country is a travesty of everything that’s fair and just. His songs of freedom are all he ever wanted to communicate and there he is telling it like it is.

Right here in the back streets of Ashley Cross.

From the opening salvo of Coney Island Winter and 35 Millimeter Dreams there’s a heady rush of New York City about proceedings. The set rocks, rolls and reggae skanks as Garland puts his all into every performance – not least the mesmeric lilt of Ghost Writer, the sophisticated soul-pop of The Contortionist and the affecting anthem to personal pride, It’s What I Am.

Following a romp through ? and the Mysterians’ 60s garage classic 96 Tears, the curtain comes down with the should-have-been massive hit single Hail Hail Rock ’n’ Roll to send the faithful home with hope in their hearts and, just as importantly, a hell of tune in their heads.

It’s easy to bandy words like ‘legend’ around, but this guy all but defines it. We shall not see his like again for quite some while.