One of British folk music’s most celebrated voices, Kate Rusby, the Barnsley Nightingale, played Lighthouse, Poole’s centre for the arts, on 18 September 2015 in support of her universally well received new album Ghost. Nearly a quarter of a century into a career that many have credited with reinvigorating folk music in this country, she remains as unassuming and enthusiastic about her life and work as ever.

And it’s a family affair – her husband Damien O’Kane is her producer and band leader, while her parents Steve and Anne met on the Barnsley folk circuit. They all live in the same Yorkshire village. Kate’s first break came in landmark all-female folk outfit The Poozies, before she partnered with close friend Kathryn Roberts for a 1995 album then released her solo debut, Hourglass, in 1997. Her duet with Ronan Keating, All Over Again, put her in the UK singles charts and her cover of The Village Green Preservation Society by The Kinks was used as the theme song for the BBC One sitcom Jam and Jerusalem.

To celebrate two decades of making music, in 2012 she released 20, a double album of previously released songs re-recorded with a host of guests including Paul Weller, Richard Thompson, Eddi Reader, Mary Chapin Carpenter, Dick Gaughan and the Grimethorpe Colliery Band.

During a break from recording her Christmas album in July, Kate took a moment to field our questions…

What have you got in store for us in Poole?

It will be a mix of old and new. There will be about eight songs from the new album Ghost and the rest will be a mix of older songs. It’s a great thing about touring for all this time, it’s 22 years now so that’s a lot of albums I have made, which in turn means there are a lot of songs to choose from! I sit before each tour and choose which songs we will play for the tour. Playing an old song that we haven’t done in a while is like seeing an old friend it’s such a nice thing to do. It is also very lovely to keep new songs in the mix though as it keeps it all fresh, so there’s always a range of songs to be had. We have not sorted our trapeze act yet though so unfortunately it will just be music! Hehe!

Do you look forward to touring; are you enthusiastic about living life on the road?

Oh I love touring, I always have. I’m not obsessed with it as so many musicians are as I am a home bird too so the traveller in me is kept in check really. It’s such a huge part of being a musician. When in the studio I can’t wait to be out playing the songs live to people. In the past it’s been tough.

I only work with lovely kind people, but the musicians I am working with now are some of the loveliest boys I have met, not to mention the immense talent in them all. It’s such a privilege to work with them. On stage and backstage, the touring team are all genuine, precious people. I would do anything for them and I’m sure them for me. We all have such a laugh together, it’s a perfect mix of people – and we all share a huge love of good food! I am a very lucky girl! 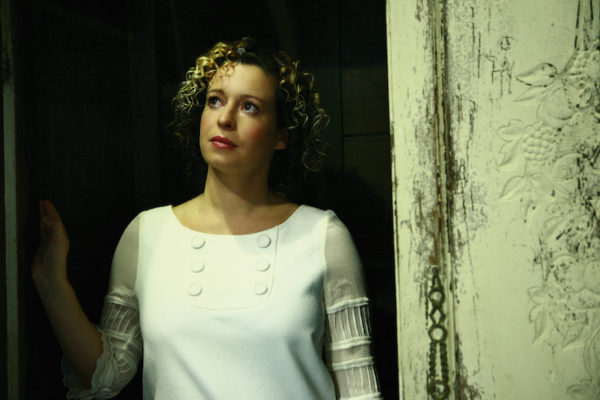 How much do you see of the towns outside of the venue and hotel?

I always do try to have a walk around every town we play in. I think it’s important to get a feel for a place and I love exploring somewhere new. I just adore going down little snickets and discovering what’s round the next corner. It’s also nice to get a bit of exercise while on tour as obviously there’s a lot of sitting in cars!

What can you tell us about the presence you share your house with that inspired the title of your album Ghost?

I wrote the song Ghost for the ghost we have in our house. It’s a very old house. After living there for a few months I saw it, a figure dressed in black standing next me, then Damien saw it a month later. My nephew also saw it while he was having a guitar lesson from Damien. We hadn’t told him about it so he knew nothing of it, he thought it was his brother standing next him, but of course when he turned round it vanished. My Mum saw one of the ladies who grew up here and asked her about it when she saw her at church one Sunday and she knew all about it. She said that her sister and mother saw/felt it but didn’t like it, where as we like it being here, and they saw it in the same part of the house too. We have a piano in that room, so one night I decided that he deserved a song as he’d been there for so long. I sat at the piano for a few nights and wrote Ghost. I hope he likes it. We haven’t seen him since but I hope he’s still around.

Are you a natural songwriter, how easily do songs come to you, is there a typical process?

Oh I don’t know if I’d say I was a natural, but it’s something I’ve always done. I’m not one of those kind of factory writers though, I couldn’t be locked in a room nine to five to write all day every day, I have only ever written when the mood takes me. It has to be late at night with no one in earshot and it usually starts off with a riff or set of chords on the guitar or piano, then the first words are usually nonsense while I feel where the tune will rise and fall, then the words will start to form around that. It’s a funny thing though because when I look back years later, I can’t actually remember writing them or where they came from so it’s a bit freaky sometimes.

What do you look for in choosing traditional and other people’s songs to sing?

The story is the most appealing, I love sitting looking through my countless ballad books reading the weird and wonderful tales. We human beings are fantastic creatures and even if a song is a hundred years old it will still be relevant as we still do the same things in life – we love, work, laugh and eventually plop off this mortal earth and every part of it is documented in the stories. I rarely sing other people’s songs really, the handful that I have sung I just fell in love with when I heard them so felt compelled. There are fantastic songwriters around and I listen to as much music as I can so inevitably I come across songs that I just have to sing.

How do your feelings towards individual songs change over time?

They are like old friends really. When we haven’t had a song in the set list for a good few years it’s always such a pleasure to sing it again, it really is like being reunited with a much loved old friend.

You work with your husband Damien in the studio and on tour, how do you separate the personal and professional, if indeed you do at all? Do the children come on tour with you? What about your dog Doris?

The girls came on tour with us when they were babies, but as soon as they were mobile it just didn’t work. I am lucky to be able to choose when and where we tour and also lucky to have my family all in the same village so between us all we make the childcare work. It’s a very precise plan to make though. But worth it. Doris is just as much fun as ever, she’s the best friend of the girls and always ends up involved in their games, dressed up at points, face painted even, she just lets them tear away, so funny. She comes to the studio whenever we record. It’s great to have a dog in the studio, if anyone gets stressed they just have a snuggle of Doris and they’re fine again – she’s a magic Staffie.

And as for separating home and work, it’s all too intertwined, but it works for us. We can sit and get the instruments out whenever we want and have a play or we can watch Coronation Street, depending on how we feel, hehe! In all seriousness though, we only ever switch off when on holiday, so those dates are the first to go in the calendar!

You’ve collaborated with other singers and a range of musicians throughout your career, what’s the attraction and is there any difference working with ‘big’ names (Paul Weller, Richard Thompson etc) and artists who might not be household names?

When touring over all these years we have had the great pleasure of meeting other musicians and some we have ended up collaborating with. It makes no difference how famous someone is, if there’s a connection then it works. I feel so lucky to have worked with all the wonderful guys and gals over the years. That’s a great thing of having our own festival, called Underneath The Stars Festival, we get to invite all our favourite bands and musicians to come up to our beautiful part of Yorkshire, it’s a true delight.

What’s next for Kate Rusby after this tour?

We are in the studio at the moment heading towards the end of a new Christmas album. It’s always a bit strange singing Christmas songs in July, but the process of making albums means you just have to work out of season. We have a tiny Christmas tree that we put in the middle of the recording room for everyone to look at while they play… ho ho ho!

The songs are all mainly from the South Yorkshire area, from a fantastic tradition we have of singing these quaint old carols in pubs while drinking beer, I love it. So much so that we do a tour in December every year now, taking these carols out and about, it’s great fun and to top it off we always have a brass quintet with us, our lovely brass boys. Anyway, this will be the third Christmas album I have made.

Then next year there will be a new studio album too so finding songs for that now. In between, lots of touring and daughter time!