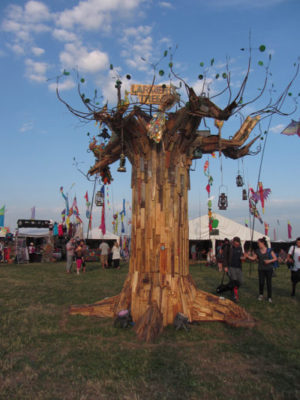 Where other festivals have spread out to accommodate more and more people, to its eternal credit Larmer Tree has steadfastly refused to pack the place – surely one of the most beautiful festival sites on the circuit – preferring instead to grow longer rather than denser.

Thus, this year’s silver jubilee Larmer Tree opened on Tuesday night in the august company of Sir Thomas of Jones and ran through until Sunday night when the no less legendary Jimmy Cliff brought the curtain (and the house) down with a stirring set of Ja’s finest anthems.

In between the hardy campers found six full days of high and low-minded artistic endeavour, all manner of creative diversions, a fair few shops and some particularly fine festival food – lobster, anyone? How about the superb Goan fish curry, homemade cakes, dozens of regional ciders and the outstanding fresh fruit pressé? Festivals sure ain’t what they used to be… let’s give thanks and praise.

But what truly sets Larmer Tree apart is the most awkward thing of all to explain. It’s a feeling, the je-ne-sais-quoi, unmistakable ‘something’ that makes the vibe. People are friendly, tolerant, willing and able to be and let be. Unlike other such gatherings in which a minority will inevitably seek to impose their outside life on the fleeting community, Larmer Tree seems to infuse its guests with communal joy and happiness – the last bastion of the love and peace ideal, perhaps. Or maybe it’s the peacocks!

Everyone will have made, seen or heard their own highlights and there are plenty to chose from. Sir Tom provided rousing opening entertainment, as did The Shires before him and lest we forget Ben Waters’ two sets on the Wednesday evening. Thursday gave us sensitive singer songwriter Drew Allen who piled the pressure on by choosing a Garden Stage set in which to debut his promising new country-rock line up – give those boys six months to get to know each other and then watch them fly, Burrito Bros style!

Elsewhere, Bellowhead seemed a little flat, but only by their stratospheric standards, something The Levellers, who closed the main stage had no trouble with. Earlier, a rampant Bella Figura had laid waste to the Big Top with their Black Keys/Band of Gypsys heavy grooves; while the Bonzos-meets-Playschool schtick of Noah’s House Band raised a smile in the Arc (where else?).

Friday was all about Blair Dunlop for these ears – growing in poise and confidence all the time, his musicianship is almost frightening while his songs and their beautifully controlled delivery speak well of the future. The new tunes he played promise much for his forthcoming third album and if he isn’t already it’ll be no surprise if he emerges as the most significant British folk singer of his generation.

Even earlier in the day the should-be-huge Gold Of My Own rang in the sunshine with a delicious set of whip-smart soulful nu-jazz that channels the spirits of Soul II Soul and Drizabone as readily as Stevie Wonder and Kenny Burrell. Less distinctive by far were the much-feted Keston Cobblers Club who obviously relished being back at Larmer Tree, yet somehow failed to translate their enthusiasm into what was a lacklustre set.

Away from the music special mention must go to the Larmer Tree’s brand new larmer tree. Commissioned from the brilliant minds and artful hands of Circus Kinetica it’s a wondrous thing to be sure. Meanwhile, in the depths of the Lostwood a variety of unexpected treats could be found, from storytellers and the Larmer Tree’s own Lyrical Laureate Cat Brogan, to selections from Tim Laycock’s Dorset songbook and the ever popular (poplar?) Wishing Tree. The Goblin Retreat welcomed message-writers, while others busted some moves on the Giant Chess Board or tracked the Twilight Temptress on her aerial hoop.

Saturday saw numbers swelled by day-trippers and very welcome they were made as well. As is their way Show of Hands delivered a brace of sterling sets on the Garden Stage and in the Arc, while Chainska Brassika took the edge off Brit-ska with a rousing performance in the Big Top. On the Main Stage the Orchestra National De Barbes and the richly talented, restlessly brilliant Femi Kuti tore up the night.

Sunday and a carnival under blue skies, yet more from the irrepressible Southampton Ukulele Jam, old t-shirts revisited, Steve Knightley playing solo in the Arc, the amazing Raghu Dixit, a singer in a tree, Bill Bailey finding plenty to laugh about and Jimmy Cliff in fine fettle. Safe to say the folks went home more than happy.

When the Larmer Tree festival started nobody spoke of ‘boutique’ festivals, ‘child ear defenders’ or ‘trolley tots’ and I’m not sure the world’s a better place now for knowing about such things, but the Larmer Tree is still exemplifying the best of it all. Of course it helps that festival infrastructure (by which I mean toilets of course) is so much better these days, but in an age when festival going has become just another lifestyle choice it gladdens the heart to be reminded of the simple, primal joy of coming together with fellow human beings in celebration of what it feels like to be alive in this moment. Here’s to the next 25 Larmer Trees!