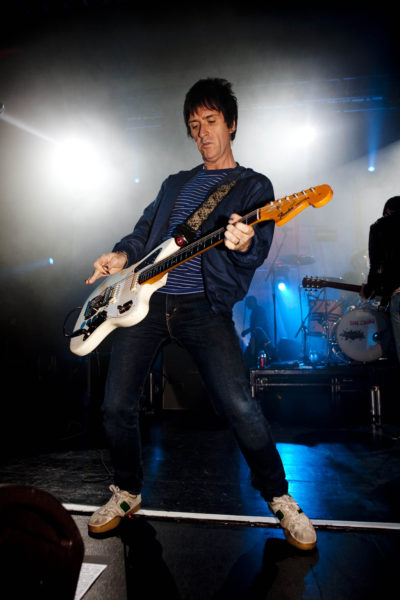 IF we get the heroes we deserve, we must have done something right to end up with Johnny Marr.

I find the former Smiths guitarist in expansive, expressive mood as he prepares to go out on the road for the first time as a full-time member of The Cribs, the punky indie noise factory from Wakefield, fronted by twin brothers Ryan (guitar) and Gary (bass) Jarman, with younger brother Ross on drums.

“What I like about them is they’re not insecure,” says Johnny, who’ll turn 46 a couple of weeks after The Cribs play Southampton Guildhall on October 7.

The age gap – Ryan and Gary turn 29 ten days before Johnny’s birthday; Ross is nearly 25 – doesn’t concern the members of the band.

“It doesn’t come up. You know, they’re not babies,” says Johnny.

Having founded The Smiths in 1982, Marr forged a fruitful song-writing partnership with singer Morrissey until their acrimonious split in 1987.

Since then he has worked with a host of talented singers and writers including Matt Johnson’s The The, New Order’s Bernard Sumner in Electronic, Chrissie Hynde in The Pretenders, Beck, Black Grape, Billy Bragg, Talking Heads, Pet Shop Boys and Neil Finn of Crowded House.

But as Johnny speaks it’s immediately clear how much he’s genuinely excited about being in The Cribs.

“I liked their lyrics from when I first heard the band. I like the sound of two guitars as well.”

Crucially, the other three Cribs also conform to Johnny’s philosophy on good rock and roll haircuts – the fringe should always head south.

I had to ask – will The Smiths reform?

He’s been answering that question for more then 20 years now. The answer is always the same and, to his credit, Johnny is fairly gracious in dismissing the notion.

“No, it doesn’t annoy me, and it’s a shame there’s a cloud of negativity around that issue.

“But thinking about playing in that situation doesn’t get me excited, unlike playing what I’m playing now, which does.

“I can’t see it happening, because I don’t think it would be anything of value. If it were going to happen, it would have done so by now.”

The Smiths – like The Jam directly before them, and The Stone Roses immediately after – meant the world to a lot of people.

“A lot of this thing that goes on with bands re-forming is to give people another opportunity to relive a past they had, or think they had, or never had, and I’m just not into that,” adds Johnny, his irritation subsiding.

“The Cribs sound inspired, full of life and energy, and that’s what I’m into… I’m not into cabaret.”

For him, the thrill of musicmaking remains the same today as when he first strapped on a guitar after hearing Metal Guru by T-Rex.

“It’s a lot of things, but the chemistry has to be right. I never used to like touring when I started, but I really like it now.

“I like standing in front of people with an amplifier behind me and helping people enjoy themselves.

“You know, nobody’s trying to reinvent their own wheels here,we’re just doing what we do instinctively.”

He’s been answering that question for more then 20 years now. The answer is always the same and, to his credit, Johnny is fairly gracious in dismissing the notion.