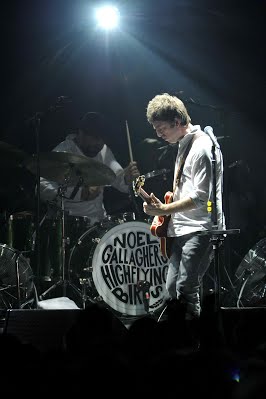 Time was when Bournemouth seafront became the geographical focus for the so-called Battle of Britpop, that moment in August 1995 when Blur and Oasis released singles on the same day.

Blur’s Country House famously pipping their northern rivals’ Roll With It to the top spot was followed barely a month later – on September 18 – by its physical representation in Bournemouth where Blur were to play a (relatively) low-key warm up date at the Pier Showbar in the shadow of the International Centre’s arena-sized hall that was to have been filled by Oasis and their merry men.

In the event, unrelated circumstances caused Oasis to reschedule their tour for October and Albarn et al claimed another (Pyrrhic) victory in the media-fuelled war of words.

All of which throws a degree of context on the once-unthinkable prospect of Blur guitarist Graham Coxon opening for Oasis guitarist Noel Gallagher.

Much can happen in 17 years and no sooner has Coxon’s obvious distaste for Country House, the song that precipitated all this in the first place, resurfaced on Blur’s Olympic kiss off gig in Hyde Park than he is throwing himself headlong into a full-on arena tour to draw attention to his deft and unflinchingly accomplished eighth solo album, A+E, with its kling-y-klang neu! beats and penchant for the motorik pulse.

Songs like City Hall and What’ll It Take are delivered without concern for the predominately middle-aged ear drums that receive them as two guitars, two basses, keys and drums are added to Coxon’s own turned-up-to-11 instrument, the better to deflect attention from his inspirationally reedy vocal. His set is mostly drawn from A+E, but there is room for a cursory You and I before the closer, Ooh Yeh Yeh, grinds to its leaden halt and he clears the stage for the main event.

When it arrives, packing a classy light show, backdrops, the Crouch End Festival Chorus and three-piece brass section, that main event seems strangely pedestrian after Coxon’s frantic efforts to defy expectations. Opening with his former band’s (It’s Good) To Be Free – an assertion of liberty later echoed by also revisiting Whatever – Gallagher is in no mood to challenge his audience unduly.

Limiting on-stage commentary to a few thank yous, some half-hearted banter with an apparently punchy front row mosher and something about Manchester City, he plays most of the High Flying Birds’ album, one new song (Frequency – one of his psyche-drone poems with a spaghetti western theme twist, politely received) and a liberal sprinkling of Oasis tunes.

The show provides ample scope for comparison. The new band – Tim Smith (gtr), Russell Pritchard (bass), Mikey Rowe (keys) and Bournemouth’s own tub thumper Jeremy Stacey as solid as ever on drums – is streets ahead of the old lot and take established faves for a fine old walk. Tellingly, Oasis b-side Half A World Away is resurrected as a kind of prequel to the HFB’s world weary AKA… What A Life!, both of them playing better than the re-appraisal of Talk Tonight.

Noel still writes songs that make grown men cry – The Death of You and Me, with its Kinksian stylings, If I Had a Gun and its heavy sigh lyrics – and some of those blokes have been with him for nearly 20 years now. There’s familiarity in the relationship, an ease of understanding and absolute faith that each will do the other proud.

But perhaps creativity would be better served if Noel were to take a leaf out of his old mucker Paul Weller’s book and stretch himself musically, test the faithful and be brave enough to just see what happens.