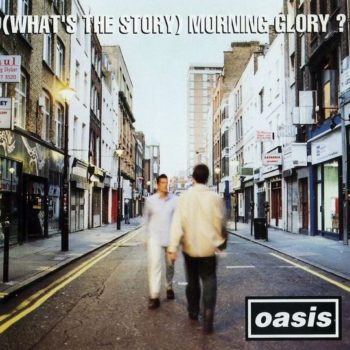 Back when it was all fields ’round here, big bands used to come out of the starting blocks like a rocket, make a racket, stash a packet and rattle off their first two albums before they even stopped for breath. Nowadays we keep hearing how new acts struggle with their ‘difficult second album’ and are probably dropped, signed to a different label or crowd funding for their third album.

Love them or not, Oasis were different from the word go. Whatever it was they had it in spades. In fact they had enough to give some of it away to a series of bands from Ocean Colour Scene to Kasabian that used it to lever their own way into the limelight, not to mention a fair few that sank without trace (The Redwalls, Alberta Cross) despite the endorsements.

If the reissue of Definitely Maybe earlier this year established it as some kind of inadvertent concept album – a paean to what it feels like to be waiting for rock ‘n’ roll stardom to come knocking, certain in the knowledge that it will – then this equally well co-ordinated revisiting of its follow up bids for similar status as the sound of what happens when it does come a-knock knock knocking.

If ever a rock ‘n’ roll dictionary is published, the only definition of the word ‘swagger’ will be a photo of this album. A dozen tracks, of which only 10 are actually named on the sleeve (the other two are both extracts from The Swamp Song in case you’d forgotten), the record captures Oasis at their arrogant, audacious best. Stealing riffs and motifs at will (Stevie Wonder, Slade, Bolan), the opening cut Hello was so obvious it even shares a co-writing credit with Gary Glitter (ouch) and Mike Leander. Don’t Look Back In Anger is littered with words and music that reference John Lennon songs and its b-side, Step Out (included here on the second disc of extras) was dropped from the actual album after Stevie Wonder, Henry Cosby and Myrna Loy, the co-writers of Uptight from which it borrowed wholesale, demanded 10% of the royalties.

Unbowed, both Gallaghers treated such criticism with absolute contempt and how we loved them for it. They’d made an album that was perfectly of its time, bristling with Brit-grit, cool, hard and clean, it elbowed Oasis into the continuum of great British guitar bands and defied anyone to ask them to leave.

At 19 years’ distance it all sounds instantly familiar. It hasn’t dated it puts a smile on the face and hope in the heart, it might be a cliché but only because it’s true, for many it’s the record that defined a generation. How many newly weds shared a first dance to Wonderwall? How many check shirted football fans took dance drugs and hugged each other singing Champagne Supernova? How many mates waved each other off to Don’t Look Back In Anger and welcomed one another home to the title track? How many babies’ heads were wetted to Morning Glory? How many music fans nodded sagely to Cast No Shadow?

As with the Definitely Maybe release, the disc of b-sides and extras is loaded with nuggets – Talk Tonight, the monumental Masterplan, Acquiesce (Noel and Liam’s finest duet), Rockin’ Chair and the deftly daft Bonehead’s Bank Holiday are laced with magic. The third disc rounds up live cuts and demos, including a markedly different early version of Some Might Say and the previously unheard demos of She’s Electric and Rockin’ Chair.

It’s far from perfect, but Oasis made Morning Glory with plenty in the tank. They went on to write and record much better songs than the ones here, they played incredible shows, reached, sold and made millions, but never again did they capture the sheer thrill of being in the biggest band in the land. It was quite a moment.