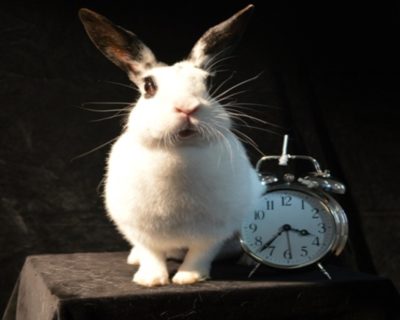 Just when you thought that Alice In Wonderland, Lewis Carroll’s singularly deranged tale of childhood, misunderstanding and adventure couldn’t get any more bizarre and beautiful, Volcano Theatre Company decides to plunge down the rabbit hole and drink all the potions it can lay its hands on.

The results can be seen at Lighthouse, Poole’s Centre for the Arts, when Alice In Wonderland opens a three-night run on Monday 30 September

Alice in Wonderland is about what the behaviour of one generation looks like through the eyes of another.  In Volcano’s version the strangeness of the world an older-than-usual Alice encounters is not removed from everyday reality, but deeply rooted in the insanities of our culture and society.

In an interview for Lighthouse, Alice In Wonderland’s director Paul Davies talks about the production and how his Alice is on a mission to reclaim her sense of magic.

Can you describe your production of Alice?

I can only say that I began by wanting to escape or avoid the somewhat cutesy Alice that is often served up by film and some theatre productions. Of course we are now aware that Charles Dodgson was not an altogether happy man – but Alice herself, she really stands up for herself in the book. Don’t we all want girls to be tougher than societies sometimes allow them to be?

Our Alice does take some inspiration from Jonathon Miller’s somewhat neglected film of Alice in Wonderland. Miller framed his Alice within the confines of late Victorian England.

I want to hold onto the dreamscape world of Alice, after all most of us do have adventures and nightmares when we sleep. Perhaps our dreams are to return to the rural idyll from which Alice begins her adventures – an ambivalent sister and a warm summer’s day?

It seems very much in the spirit of Carroll’s original that anything can happen – how did this version of Alice evolve?

The genius of Carroll is that it appears anything can happen, but of course it is all carefully modulated and no doubt therapists of various persuasions have examined the meanings and metaphors to great effect.

I believe that it is a very good story told as it was to the Liddell children. What it reveals is Carroll’s inability to deal with the changes that capitalism was demanding of all people and places. The fantasy of escape is Wonderland and it might legitimately be asked whether this fantasy is now lost or still present for most of us.

The original is such a landmark work, how far did you have to go to escape its shadow?

Yes, you are right, sometimes when you tackle a pivotal work – well known if not well read – it is good to travel a long way from it. Occasionally I would myself dream of putting Alice next to a piece of gritty social realism (Alice and Kes, for example!) and then I wanted to cast Alice as far, far older than she appears – which I have, to an extent, done.

After all we must all negotiate our dreams, our desires our unhappinesses. How did Alice Hargreaves as she became deal with the burden of “being Alice” – that is of course another play that has already been written!

The idea that we lose our sense of magic as a necessary part of growing up seems pretty sad, is your Alice on a noble mission to reclaim it?

Yes, she is. Enchantment is one of the few resources we have left to stage a kind of resistance to the intoxicating journey of progress or consumption. What is so wonderful about being an adult?

How do we retain our curiosity without succumbing to cynicism as we age?

Of course, there were others like William Morris who got more angry and passionate about the world in which they were living as they grew older. There is a brand of post modern/radical cynicism abroad, but I think it is less dangerous than a kind of historical shopping fever that has gripped Europe and beyond post 1945.

As an adult how do you think you are viewed by older and younger generations?

I have two smallish children and one biggish one. I don’t think they see me as Charles Dodgson incarnate, a story teller yes, but the kind of donnish reverence, thank goodness that is gone. I cannot abide that.

Dodgson really did not like little boys, I have three daughters.  I have no idea how I am viewed as an adult by older generations – in Wales, as in much of the country there were once “proper jobs” so I suspect that me and my projects are viewed with a degree of suspicion and an air mystery.

How have your own views of older and younger people changed over the years?

I spent many years studying people who were old or dead so I like to think I had some sympathy there, although it was not because of their age that I enjoyed their company, but their views. I have somewhere for example a wonderful old tape recording of Michael Foot talking about socialism.

When you have children it seems to open a conversational door to your childhood and your parents – forwards and backwards if you like – that is very beautiful and very scary. Like Elliot, inspired by Alice slowly there comes into view, “Time present and time past… all part of time future”.

How much is possible?

I like to take, on the one hand something from Fredrick Nietzsche, the will of each of us to count, to not climb back inside the bunker; and on the other, the notion of neighbourliness, to re-imagine ourselves next door, different and maybe even as children (again).

Then there may be something a little better than there is now.