Seeing the recent post from Mr Cool’s Dream channel of Paul Weller interviewing the mighty Curtis Mayfield brought some very happy memories flooding back for Cornershop ally Nick Churchill, author of Yeah Yeah Yeah: The Beatles & Bournemouth, who wanted to share a few of them… 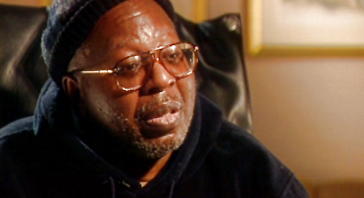 The interview was recorded in the afternoon of 31 July 1988 at the legendary Ronnie Scott’s Jazz Club in Frith Street, Soho. Curtis’ show that night was recorded for video release and subsequent live album called, of course Live At Ronnie Scott’s.

That summer I had been working at Rough Trade, hearing stacks of early acid house cuts on white label, trying desperately to blag a pre-release copy of The Smiths’ Rank album, meeting Bill Drummond and Yazz, generally having a ball. But the crowning event was getting tickets for the invite-only Curtis gig.

Just a few weeks after the poorly-received release of The Style Council’s Confessions of a Pop Group album, a noticeably nervy Paul Weller was there, of course, with then wife Dee C Lee and Dr Robert of Blow Monkeys fame, but why the hell would anyone want to look at them, when Curtis was among us?

His performance was flawless, heartfelt, generous and completely inclusive. The place was full of music industry liggers, a few movers and shakers, some famous faces, not the most obviously receptive crowd but it took Curtis about three bars of the opening Little Child Runnin’ Wild and they were in the palm of his hand. It’s All Right, People Get Ready, Pusherman, Freddie’s Dead, I’m So Proud, Billy Jack and a party-hard We Gotta Have Peace followed before he brought the house down with Move On Up and a closing To Be Invisible that brought tears to the eyes.

Afterwards I was introduced to Curtis, shook his hand, told him he was wonderful and he looked up and said “Love and peace, man”. What a moment – a beatific little Buddah figure with the heart of a lion, the voice of a siren and the soul of a man. There was something divine in those few words, the like of which I doubt I’ll hear again.

On 13 August 1990 Curtis was paralysed from the neck down when a lighting rig fell on him during a charity concert for the homeless in Brooklyn, New York. Although unable to move, he could sing and recorded most of his final album, the moving and relentlessly positive New World Order lying on his back.

• First published at The Cornershop