Determined, dedicated, at times waspish, at others disarmingly generous, artist Katharine Church – Kitty to her close friends and family – was all these things and many more besides, not the least of which was being possessed of a supreme talent. A frequently, if not quite entirely, unsung heroine of late 20th-century British painting, she spent much of the second half of her life firmly embedded in a North Dorset that arguably has changed more in the time since her death in 1999 than in the decades that she knew it.

Now, with the publication of the sumptuously-presented Katharine Church: A Life In Colour by the non-profit making Tillington Press, the attention of the art collecting world has once again turned to this most intriguing and enigmatic artist whose later work, on which the book is largely centred, captures the essence of a Dorset that is fast receding into the past.

She painted throughout her life, although perhaps not as much as she would have liked, and to a fair degree of acclaim from critics and fellow artists alike. They were her natural peers whose company she revelled in, but just as many Dorset folk knew her as the matriarchal owner of the Hambledon Gallery on Salisbury Street in Blandford Forum where she hosted exhibitions which included some of the leading lights of British art including Henry Moore, Elizabeth Frink, Cecil Beaton, Julian Trevelyan, Frances Hodgkins, Ivon Hitchens, Mary Fedden and Lucy Rie. Now run by her long-time business partner and close friend Wendy Suffield, it’s more than 20 years since the last regular exhibition, but the shop continues to be a meeting place for people many of whom knew Kitty and need little encouragement to recall her indomitable ways.

‘We were great friends and there’s so much joy in my memories of her, they were great days, but she could be quite formidable,’ says Wendy. ‘Many times I went home and had a good cry, then all would be well the next day; you just had to put up with it.’

Having grown up around her family’s friends in the fabled Bloomsbury Group, Kitty studied at the Royal Academy and the Slade and exhibited regularly at the Royal Academy in the early 1930s, as well as at several London galleries. In 1935 she met Anthony West, the son of HG Wells and Dame Rebecca West, the eminent writer and journalist. They married in 1936 and the following year moved out of London to the Dorset/Wiltshire countryside where they were visited regularly by a wide circle of friends that included the painters Frances Hodgkins, John Piper and his wife Myfanwy the renowned art critic, Ralph and Frances Partridge, Julian Trevelyan and Mary Fedden, as well as the publisher Noel Carrington, brother of Bloomsbury artist Dora.

The Wests divorced in 1952, two years after Anthony had left for the United States, leaving Kitty to bring up their two children, Caroline and Edmund. By the time they had finished school Kitty had recovered from the heartbreak of her marriage and bought Sutton House, a small farm with a large garden on the edge of the Wimborne St Giles estate at Woodlands. 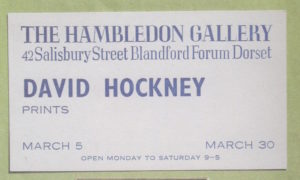 Central to the quest to re-order her life was the purchase in 1963 of the Hambledon Gallery, which had been opened a year earlier by Amabel Yorke and was a meeting place for artists, most notably the Forum Club who gathered there to discuss and show their work.

Around the same time young art teacher Mike Suffield and his pattern drawer wife Wendy were making regular house-hunting visits to Blandford as they sought to move out of their first home – a dilapidated caravan hidden in a Nissen hut on a racecourse near Epsom. Drawn into the Hambledon Gallery as much by the shilling-a-cup coffee and Digestives that Kitty served as by three Keith Vaughan paintings, it wasn’t long before the young couple had forged a friendship with the gallery’s redoubtable owner and when Mike got a job at the secondary school and, subsequently, 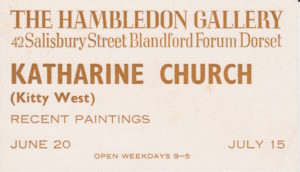 Bryanston, Kitty made Wendy promise she’d work for her as soon as they found a home.

‘I was still working in London, but every Wednesday I would bring work home and work for Kitty at the Gallery,’ says Wendy. ‘She in turn stored whatever sticks of furniture we managed to buy up before we bought the house we wanted.’

In those early days Kitty used her London contacts to host a number of exhibitions by artists whose work was more readily seen in larger metropolitan galleries. She also sold her own paintings and hosted post-preview dinner parties to which she would invite the younger artists whose work she encouraged so they could connect with her more stellar guests.

‘Blandford was a very different town in those days and although people knew of Kitty and the gallery, not many outside of the art people knew about her painting,’ says Wendy. ‘She was a very talented serious artist and was happiest talking about art with those people and really didn’t have much time for the general gossip and chatter, that wasn’t her level at all.’

However prestigious its exhibitors, no gallery can survive without sales and the Hambledon wasn’t selling a great deal of art. Although Kitty always kept a few homewares, under Wendy’s canny direction it began to stock carefully chosen ‘household’ items – Habitat pieces by Terence Conran, early Laura Ashley and Dartington glass – that Kitty blithely referred to as ‘Wendy’s trash’.

‘Kitty would come in some days and shrug, say there’s not much going on, have a cigarette and go home to paint or work in the garden, but we couldn’t go on just inviting the same people to exhibitions and hoping they’d buy, not with the cost of collating the work, then insuring it all – Mike drove up to Edinburgh and thence to Glasgow on one occasion to collect a work and bring it down in time for the private view.’

Fortunately ‘Wendy’s trash’ was extremely successful and not long after Wendy became a partner in the business in 1974, having used her wages to buy her share, she was able to purchase the house next door, knock through and create further selling space for clothes downstairs and expand the exhibition space upstairs.

Kitty retired in 1984 as Wendy took on full ownership, expanding the sales floor but continuing the exhibitions. In 1988 she organised a show of new prints by David Hockney.

‘We had one ‘sold’ spot put up before the private view but that was all,’ she says. ‘I approached the bank to lend me the money to buy the whole lot but they weren’t having any of it… so short sighted.’

Kitty, who painted Mike and Wendy’s first two children, Victoria and Sandy, provided work for the final exhibition at the Hambledon Gallery, in 1994, by which time Victoria was working there having been at the New Art Centre in London and before opening a second shop in Winchester as Wendy bought the former butcher’s from Joe Peaple next-door on Salisbury Street and expanded again.

‘We were really struggling with exhibitions but kept them going because of Kitty,’ says Wendy. ‘She always had her bright red desk in the corner but she didn’t like everything we did – like making coffee for customers; coffee was for selling as far as Kitty was concerned. Yet even now we have people come in and say: ‘Oh, where have the pictures gone?’ It’s very strange.’

Today, with the unstinting help of youngest daughter Charlotte, Wendy remains as hands-on as ever, buying goods for the shop and not above turning in the occasional 12-hour shift.

She’ll miss it but says she needs to cut back, although in common with many an independent retailer the Hambledon Gallery faces uncharted challenges from an online universe that Kitty West could have barely conceived of, never mind understood, and yet it prevails – a cornerstone of Blandford’s local distinctiveness.

‘From getting to know Kitty the Hambledon Gallery has brought us so many dear friends
and a lifetime of wonderful memories,’ says Wendy. ‘It has a very special atmosphere that
people just seem to gravitate towards; and Kitty is a large part of that – it’s what she…’

The sentence trails off and Wendy looks away, just for a second, before regaining the moment and confiding, without any hint of lament:  ‘You know, it still feels like Kitty’s place and I’m the new girl. It opened, Kitty bought it and I came a year later and yet it still feels I am somehow intruding on what Kitty made. She was a dear, dear friend to both of us and I can’t explain why I should feel like that, but there it is nonetheless.’