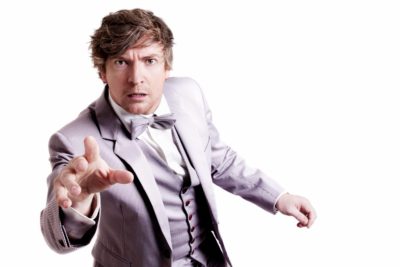 He’s worked on screen with Jim Carrey (in Yes Man) and the likes of Rhys Ifans and Bill Nighy in The Boat That Rocked, as well as forging a reputation as a singularly talented stand up, but Rhys Darby is still best known as Murray Hewitt, the child-like genius manager of Flight of the Conchords, the spoof rock band radio series then sitcom creation of Bret McKenzie and Jermaine Clement.

Not that he’s complaining, far from it. Conchords cleared a take off path for his comedy career that now means he splits his time between Los Angeles and his native New Zealand. He’s also found time to learn to drive an amphibious boat and star in Paddy McGuinness’ new panel show for ITV1, Mad Mad World.

Rhys Darby is on the up and brings his new touring show, This Way To Spaceship, to Bournemouth’s Pavilion Theatre on July 1.

Hi Murray, meek geek, or the king of cool…?

Definitely the king of cool. But cool is a vibe only reached when you’re truly comfortable in your own skin and when that happens you can become complacent. Always remember the geek staring over your shoulder. He’s your friend.

From the description of your show – “a handy guide to living life like you’re the champion no one has heard of” – it sounds like there may be more of you in Murray Hewitt from the Conchords than we might have imagined?

Yes, there are facets of Murray in me. Of course. And I’m glad there are. His naive optimism is my own. It’s the basis for believing there are no limits… but also no deterrents, like lack of knowledge.

Murray must have cast a long shadow – how have you set about climbing out from behind it?

It will take a while. I’m still embracing the love that people have for him. My own stand up is quite different to anything in the Murray world, so that has helped define Rhys (me) as a person. I also have a few other characters up my sleeve and once they make it to the screen, Murray will have to pull his shadow in a bit.

Did This Way To Spaceship grow out of your stand up shows or did you set out to write a show from scratch?

This Way To Spaceship is a book I wrote. Part autobiography, part science fiction handbook. This show is an adaptation of that book. So it’s all new material.

Is the book a long version of the show?

Yes, that’s correct. The book also comes with 26 hand drawn illustrations… which aren’t in the show.

Writing sci-fi based on your own life – how does that work?

Science fiction is imagination. I describe where my life has gone and then using my imagination I project where it is heading. Then I change tense and make out like it has already happened.

Hollywood, Edinburgh and now the towns and cities of England, where next? Outer space?

Yes. That’s the goal. I’d like to be the entertainer on cruise ship heading to Mars.

Why did you learn to drive an amphibious boat?

Because I bought one. It’s called a Sealegs. It’s a New Zealand invention. A wonderful toy. I drive it from the boat shed down onto the beach and into the water. Then I flip a switch and the wheels disappear and then the outboard motor takes me off into the sunset… of the ocean.

Jim Carrey compared you to Peter Sellers – who and what is he like?

Jim Carrey or Peter Sellers? They are both my comic heroes. I count myself very lucky to have worked with Jim. He’s awesome. The master of physical comedy. I learnt a lot from watching him work on Yes Man. We both discussed our wonder of Sellers’ work. He had the perfect pitch of empathy in his oddness, no one has been able to match his comic acting skills.

Was any of this planned?

What? This interview? Oh… do you mean my career? Yes. It was planned out in my head. If you believe in something strong enough and you’re realistic about it, it can happen. It will shock you though when it does.

It’s all a long way from the New Zealand Army – what did you do in the military?

I was a telecommunications operator in the Royal New Zealand Signals Corps.

What did you learn?

Morse Code, antenna theory and soldier skills like jump, tuck and roll. I also learnt to use five different types of weapons including the M-72 rocket launcher. The only skill I remember now though is how to fold my socks.

Did Conchords rescue you from a career in the armed forces, pluck you from obscurity, or neither of the above?

Neither of the above. I was doing pretty well as a stand-up at the time.

How well did you know Jermaine and Bret before Conchords?

I had met them in New Zealand on a few occasions but we really got together in Edinburgh during the fringe festival of 2003. We became good friends.

How well do you know them now?

As well as people who are good friends. We are all so individually busy that these days unfortunately I don’t get to see them as much as I would like. We live in different cities. Sometimes different countries.

Is that a good thing?

They asked me to tour with them (Australia and NZ) but unfortunately I had already planned my own UK tour. We’re like cool looking ships in the night…

A film version seems to have been talked about for ages, what news?

No news yet. But like mum used to say: ‘No news is good news.’

What did the real New Zealand tourist board make of Murray? Have they rethought their promotional poster campaign?

They loved him. I’m sure Murray did a lot of unintentional work for them. I’ve met those people. They’re lovely folk. Unlike Murray they work hard.

Does your family travel with you and what do your boys make of their dad on stage and screen?

Yes, they do on most occasions. The youngest one is a bit young (two) so he’s not really sure what’s going on. The oldest one (six) is very proud of me. He’s getting a little bit sick of kids at school saying: ‘Your dad’s Rhys Darby!’ though. He loves touring with me and visiting new cities so he can’t wait for the UK tour.

What’s next for Rhys Darby?

Writing mostly. I can’t reveal too much information but after being in ‘other’ people’s TV shows, I felt it was about time I wrote my own one. So…. watch this space! (Oh, I might’ve given a clue there!)

You read it here first!