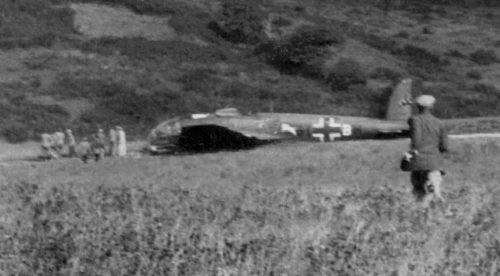 Taken by Aircraftsman Tom Williams, who was stationed at the RAF radio station on Studland Hill, shortly after midday on 25 September 1940, this picture is one of a sequence that chronicles a Heinkel He111 bomber crash-landing at Westland Farm on Ballard Down, near Studland. The photos – on one-inch by two-inch enprints – had been kept by his son Alan until photographer Roger Hopkins from Bournemouth offered to restore them as part of his research into the story.

‘The prints were tiny and as far as anyone knew, they simply showed the bomber crash-landing, but the computer restoration revealed this group of men,’ says Roger. ‘It’s the German aircrew carrying a mortally wounded comrade clear of the wreckage.’

The Heinkel had been part of a bombing raid on the Filton aircraft factory near Bristol, in which more than 250 people were killed. After delivering its deadly payload, it was fired on by a Spitfire and lost its port engine. Losing height and lagging behind the main formation, it limped towards the south coast where it was attacked again and its other engine destroyed.

Spitfire pilot John Wigglesworth followed the Heinkel down as it headed east towards Old Harry then back westerly until it landed, wheels up, on a flint field before the port wing became entangled in a fence, forcing it into a right-angled lurch towards a track. Circling, Wigglesworth saw three Germans climb out of the plane before pulling the other two clear. He then flew to RAF Warmwell to re-arm and refuel.

The Heinkel’s pilot, Fritz Jurges, radio operator Rudolf Weisbach and navigator Karl Kothke pulled their comrades, gunner Otto Muller and flight engineer Josef Altricher, from the aircraft. The 22-year-old Altricher was seriously injured and bleeding profusely from the hip. As the RAF men ran down the hill to meet the Germans, farm-workers relieved the enemy of their pistols and a lady brought tea for the wounded Altricher, who died before a military vehicle appeared some minutes later to take the aircrew away.

Their war was over, but the mark they left on Studland remains to this day. ‘In low sunlight you can still make out a small dip in the landscape, which is the scar left by the Heinkel as it crash-landed,’ explains Roger. 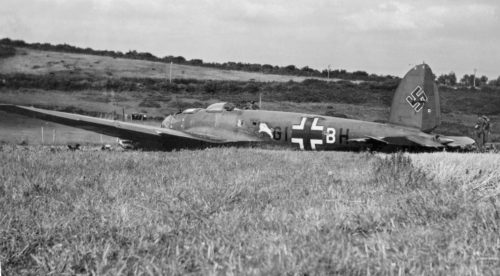