Having swapped blackboard and chalk four years ago for canvas and brush, former teacher Richard Watkin is enjoying a new lease of life as a painter, turning the Dorset landmarks he loves into vintage-inspired artworks.

With wife Judi acting as marketing manager, administrator, sounding board, critic and tea maker, what started life as a hobby has become a small but thriving business and together they have seen sales blossom from a few canvasses to a full range of prints, greetings cards and original paintings as well as commissioned works.

‘I’ve really taken to working from home, mainly I think because I’m doing something I love,’ says Richard. ‘It’s a totally different mind-set to going out to work. I listen to BBC 6 Music a lot and after I phoned up one of the shows recently and ended up on air it struck me that quite a few graphic designers and artists are featured.’
Judi laughs and the banter begins to flow. She reminds her husband she still goes to work, albeit part time; he counters with the claim he has to go shopping that day and then make dinner…

Richard trained as an art teacher, in ceramics, and taught in several schools before moving to Dorset in the mid-1980s to take up a post at Broadstone Middle where he quickly added computers and technology to his skills. He and Judi met, married, settled down and brought up a family, but as their children flew the nest, despite a move to supply teaching in search of greater variety, Richard fell out of love with the profession.

‘By the end I was mainly teaching IT classes so not only did I have a classroom of 33 pupils I also had a classroom of 33 computers – I wouldn’t like to say which were the more temperamental. I decided to take up painting and almost immediately I settled on acrylics, teaching myself as I went along. 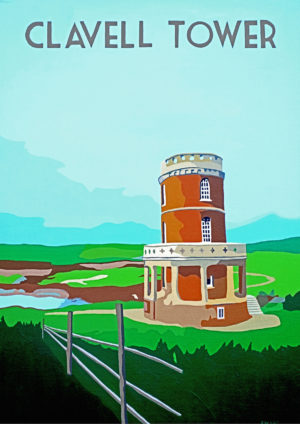 ‘My first paintings were copies of artworks and scenes from movies, particularly the Merchant-Ivory films that starred Helena Bonham Carter…’

Judi interjects: ‘We ended up with a lot of Helena around the house. It was a bit worrying.’

Having grown up in his father’s toyshop, where his dad used to paint dioramas for the model train sets that filled the shop window, Richard was drawn to the packaging artwork of the Airfix model planes, boats, cars and tanks. Once he started painting it was only a matter of time before his love of his adopted home county met his knowledge of mid-20th century transport and interest in the poster art and typography of the 1930s.

Richard and Judi decided to show some of his work for Dorset Art Weeks in 2014 and set about creating and marketing a ‘calendar’ set of 12 gently nostalgic paintings of Dorset landmarks that invoked the feel of vintage transport posters. Still unsure of how they would be received, never mind how they should be priced, they invited a few friends over to test the water.

‘We sold six paintings straight away,’ says Richard ‘and haven’t looked back since.’

A keen photographer Richard has an archive of images taken over the course of 30 years of family trips around Dorset. Working from photos he edits the real world vistas to suit his compositions – losing a lamppost here, a rubbish bin there – and hand paints the text in period typefaces. The lettering is always there at the outset.

Whereas some might produce an image and overlay the words on screen, the whole point is that I paint on canvas, so everything is done by hand and that includes the lettering. If I change the painting then I have to repaint the letters. There are usually at least three or four layers on each canvas.’

Unsurprisingly paintings evolve over time – a cloudy sky can become cloudless, choppy seas can be calmed, foreground vehicles come and go. In one painting of Christchurch Quay with the Priory beyond Richard painted a Sea Vixen jet as a nod to their production at the town’s De Havilland factory.

‘I didn’t like it,’ says Judi. ‘It looked like the plane was going to bomb the Priory. In the end we photographed the painting, used Photoshop to remove the plane and put both versions on Facebook then asked people to comment. We thought it would be a few family and friends who would bother to post anything, but we had about 70 comments. We were really touched that so many people bothered to take an interest.’

Richard painted over the plane: ‘But we made prints made of both versions.’

Which arguably makes more sense when Richard explains many of his customers are men attracted by the modes of transport that typically feature in the foreground of his work.

‘We were at the Shake & Stir vintage fair in Southbourne last summer and this very dapper chap came up and said Richard should paint his car, a red MG,’ says Judi. 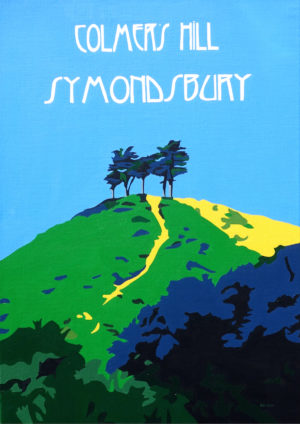 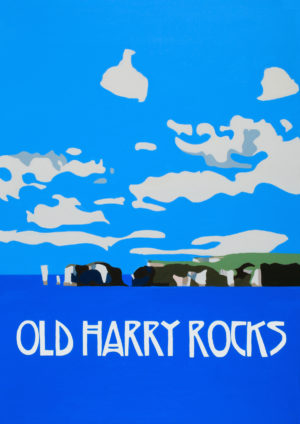 ‘It turned out I already had. I’d seen it in the Morrisons car park in Verwood, photographed it and used it in the new version of the Wimborne Minster painting that had been my first artwork,’ says Richard, taking up the story.

‘The chap was delighted and we posed for photos with him and the car,’ adds Judi. ‘That’s one of the things that’s so lovely about doing this – we get out and meet people, or they come to the house and we hear their stories about their connections to places and that becomes part of the story of the painting as well.’

From stressed out supply teacher to purveyor of scenic serenity, Richard Watkin is happy to admit he’s a lucky man.

‘As a way of supplementing my income it really couldn’t have worked out better,’ he smiles.

‘Oh, I’ve told him – any sign of stress and it ends right there,’ adds Judi, also smiling.