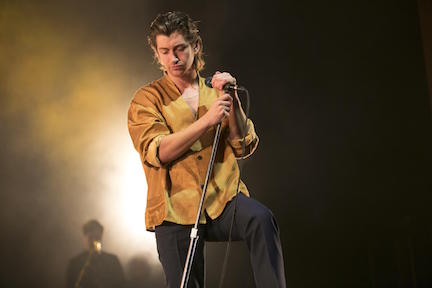 It’s nearly ten years since Alex Turner last played the BIC with the Arctic Monkeys in their first flush of success on a (much too) hastily arranged arena tour. Like rabbits caught in headlights they looked terrified – it nearly broke them.

But from the chaos they emerged stronger and their second coming brought a line up shuffle with the spotlight on Turner’s songs left, right and centre stage.

So confident was he there was even room for a side project, The Last Shadow Puppets, in which he joined new pal Miles Kane in turtleneck sweaters to pay homage to the string-laden dramatics of Scott Walker singing Jacques Brel. 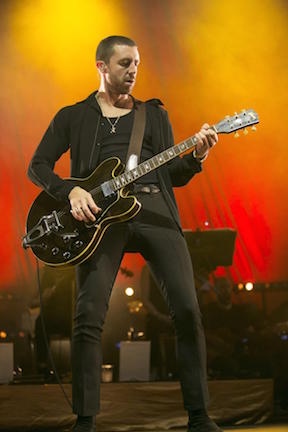 Setting aside the absurdly overblown lounge lizard schtick with which they’ve entertained festival crowds this summer, he and Kane – backed by a string quartet and full band – serve up the many highlights of their second album, Everything You’ve Come To Expect, along the way adding extra muscle and drama to first album gems The Age of the Understatement, My Mistakes Were Made For You and, especially, Meeting Place.

A stunning rendition of Bowie’s Moonage Daydream opens the show with Turner shimmying like the Thin White Duke of yore and Kane laying down some rock ’n’ roll like Mick Ronson in his prime – lotta soul.

It sets the bar for what follows, obliquely discharging lascivious fevers in Miracle Aligner and The Element of Surprise and spinning out lost love laments like Used To Be My Girl and The Bourne Identity (introduced as The Bourne-Mouth Ultimatum) leaving Kane to both exasperate and mesmerise with Bad Habits and a disquieting cover of The Fall’s Totally Wired.

In the end though it’s Turner who calms the calculatedly shredded nerves crooning encore recitals of the strident Sweet Dreams TN and The Dream Synopsis before solving the mystery of the missing guitar to see the night out with a rousing volley of Standing Next To Me.

As Ziggy himself would have had it: ‘Wham bam thank you ma’am!’