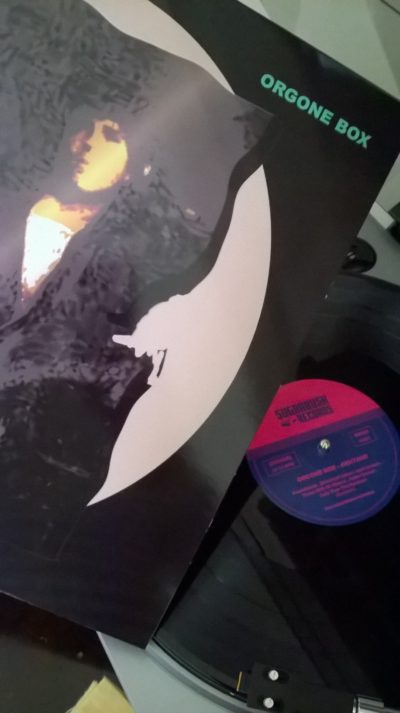 Given that some of the records featured in this series have lain unplayed for a decade or more, to find one that’s drifted for a couple of years is not much of rediscovery… except this one is. It’s an absolute gem and in its original form is well over 20 years old.

Back then The Orgone Box sported a quaint (by 1996 standards anyway) definite article and the appellation selected by one Rick Corcoran, a son of Sheffield washed ashore in Bournemouth, for his album of beautifully crafted astral pop nuggets then called Confectionery. It came out on a tiny Japanese label and in amusingly obtuse Lee Mavers style Rick always reckoned they’d messed about with the songs, speeded them up and generally defiled them.

But to a soul the feeling from those who heard the record was that it was at least playing footsie with perfection if not quite rushing it up the aisle to live happily ever after. Of course we did, that was exactly what we were meant to feel about it.

So, fast forward a couple of decades and Centaur is the sound of Rick returning to the material, re-recording some of it, remixing most of it, leaving some bits alone and adding a brand new song – the psyche swell of Wethouse. Was it worth it? Hell, yes, for it provides new opportunities for it to find fresh ears to seduce.

In an album of standouts the killer-diller 45 Judy Over the Rainbow still shines, as does the Lennon-esque shimmer of Find the One, which incidentally, predates Richard Hawley’s masterful Coles Corner by a decade or more. Wurld Revolvz and Hello Central play with each other in the gap between Revolver and Sgt Pepper; while Mirrorball bags bits from Beatles, Banshees, Floyd, Cure, Elton,. Uncle Tom Cobley and all as it invents Mica and The Lemon Twigs only miles better. Elsewhere, opening cut Anaesthesia drips with droll humour and a stadium-sized finale that resurfaces on the closing missive Bubble.

And then it’s over, leaving those of us in the know as breathless as the first time we heard it and willing it to find new converts. Trot on, you gorgeous beauty…