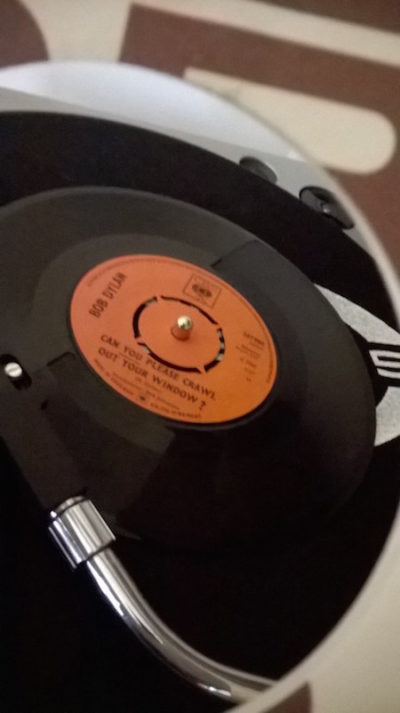 Routinely overlooked in the pantheon of Dylan 45s and invariably missing from compilations*, Can You Please Crawl Out Your Window? is a nugget that never fails to satisfy whenever I find it again, which is every couple of years or so. The lyrics are a classic mid-60s Dylan sneer – acerbic, accusing, a beautifully measured climax to 1965’s acid trilogy of singles that opened with the searing Like A Rolling Stone and continued with Positively 4th Street – the opening line of which features at the tail end of Can You Please Crawl Out Your Window?

Not that he ever said as much of course, but this sounds a lot like Dylan decrying the hangers-on, the fixers, the self-appointed arbiters of meaning whose bubbles he loved to burst, as he urges the object of the song to fan their own flame.

Musically it’s not as cut and dried as the single that preceded it, but it captures The Hawks – Robbie Robertson, Rick Danko, Levon Helm, Richard Manuel and Garth Hudson – at their most electrifyingly nimble. (For the uninitiated they backed Bob on his landmark 1966 world tour and went on cut their own slice of pie as The Band.)

The flip, the title track of his sixth studio album Highway 61 Revisited and, as such, probably better known than the A-side, contains one of those great ‘clues’ that Dylan sleuths love to hang on to – the opening line: ‘Oh God said to Abraham, Kill me a son / Abe says, Man you must be puttin’ me on.’ is often read as self-referential as his father was called Abraham, making Bob the possible sacrifice called for by the Lord.

Who knows? What’s certain is that Bob ain’t sayin’ so we’re left with the puzzle and yet another imperious classic.

His inclination to the caustic apparently cleansed for the time being, the next single, One of Us Must Know (Sooner or Later), was to offer more confessional fare and when that 45 resurfaces we may yet speak again of these things.

For now though… Can You Please Crawl Out Your Window?

* OK pedants, I know it’s on Masterpieces and the Biograph box set, as well as The Cutting Edge but you get my point, right?