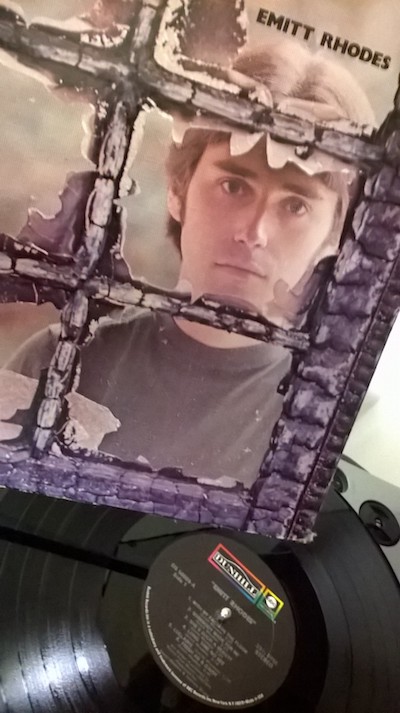 This is one of those records it’s impossible to tire of finding again, even if it’s only a couple of hours after it was last played. Bright, beautifully crafted, endlessly pleasing and like the best art there’s always something new to discover.

There are some parallels with the career trajectory of his contemporaries Big Star in that for all the critical acclaim Rhodes garnered he remained something of a mystery to the record buying public. Like Big Star’s Alex Chilton in The Box Tops, Rhodes had a poppy past in The Merry-Go-Round and like Chilton’s Big Star foil Chris Bell, Emitt Rhodes was infatuated with The Beatles, particularly McCartney’s way with a tune and Lennon’s lyrical wit.

Rhodes was to release three albums for ABC/Dunhill between 1970 and 1973 then nothing until the 2016 record Rainbow Ends.

His self-titled 1970 was preceded by a Merry-Go-Round contractual obligation entitled The American Dream, but unlike the cast of Hollywood session players on that record Rhodes played every instrument on Emitt Rhodesand as such it serves his reputation well as his definitive statement.

Opening cut, With My Face On the Floor, is melodic perfection – a tune with the half-life of weapons grade plutonium and a lyrical master class to boot. It’s brilliant. Ditto the upbeat sunrise that is Live Till You Die; the matchless praise anthem You Take The Dark Out of the Night.Somebody Made For Memight have provided a blueprint for Queen’s vocal harmonies, but we can’t hold that against him. Criminally ignored as a 45, Fresh as a Daisy should be available on the NHS and the gentle Lullabywas well used by Wes Anderson in the beautifully realised flick The Royal Tenenbaums.

If great songs ever meant anything this is a record we should all love.