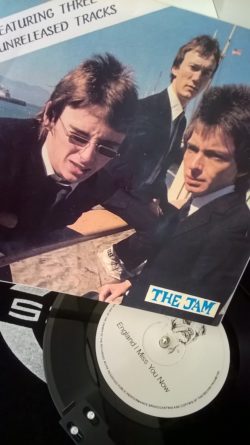 Ever done something you probably shouldn’t have…? It was 1980 and with Going Underground entering the charts at number one The Jam couldn’t put a foot wrong. This song exists to prove they – well Paul Weller (happy 60th birthday by the way!) – at least tried.

It’s a (very) rough guide vocal to a Cockney Rejects demo that Weller and producer Pete Wilson messed about with at Polydor Studios one day. The Jam man had the nous to nip the whole thing in the bud at the time and the record was shelved. It finally surfaced in 1991 as two 7” versions – 500 copies of this one credited to The Jam with their 1975 demo of Stevie Wonder’s Uptight and a 1982 bash at James Brown’s I Got You on the b-side. The other was limited to just 45 one-sided copies and credited to Cockney Rejects. Both were hand numbered.

When the bootleg appeared in 1991 Weller was moved to write to the Boys About Townfanzine: “They asked me to write a song for them, which never happened, but I rewrote the words (or at least some of them)… So I rewrote them and probably sang a guide vocal for them. Who knows? Who cares? It was fucking ’orrible as far as I can recall.”

If the Cockney Rejects were unlikely playmates for Weller, there was a connection in the shape of Rejects/Sham 69 roadieGrant Fleming who was one of The Jam’s earliest fans and a prime mover in what became London’s Mod revival. After spells in the short-lived Kidz Next Door with Jimmy Pursey’s brother Robbie, and Lords of the New Church, Fleming immersed himself in West Ham’s ICF hooligan contingent, went off to document war-torn Central America, came back in time for acid house, set up a dance department for Creation Records, worked with Primal Scream as a photographer and nearly joined Oasis.

Grant is/was a ‘man who can’ (and does) – he even took care of Jason Donovan when the Neighbours star overdid it at Kate Moss’s 21st birthday party in her then boyfriend Johnny Depp’s LA club the Viper Room in 1995.