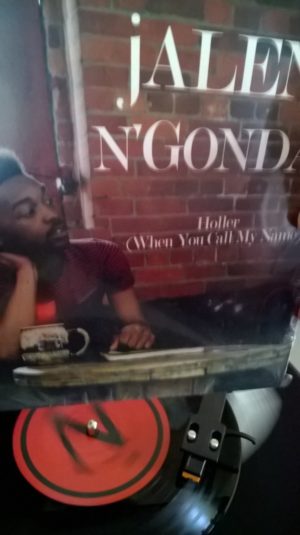 I’ve been ‘rediscovering’ this no-longer-available 45 on a regular basis ever since I picked it up last year at a gig in a back street club in Poole where Jalen N’gonda was opening for Stone Foundation, the Paul Weller-endorsed (and produced) soul collective.

Jalen has not yet seen 25 summers in this world and yet he is possessed of a voice that can make the angels cry. Clearly steeped in the rich fullness of Motown, Stax and Chicago soul, he hails from Wheaton, Maryland, but is based in Liverpool, and his set reveals as many tantalizing glimpses of 60s Merseybeat as it does pumping Northern soul, British mod-R&B, uptown funk and the cool jazz of Miles Davis et al.

As calling cards go this is mighty fine – Holler is a delicious 6:4 ballad that manages to channel Otis Redding, Sam Cooke, James Carr and Etta James into a simple guitar-backed arrangement that takes heart from a deftly controlled rhythm section.

On the flip is Why I Try, a grifting dancefloor workout that’s only a dash of talc away from being a Northern floorfiller, but also hints at the smudged glitterball dreams of the Last Shadow Puppets debut. Pure class.

This lad is a huge talent and these tunes are just the start of it. Listen out for more on his digital-only Talking About Mary EP – stand out track is the Curtis Mayfield/Jackie Wilson jam I Guess That Makes Me a Loser – and pray that a full-length debut ain’t far away.