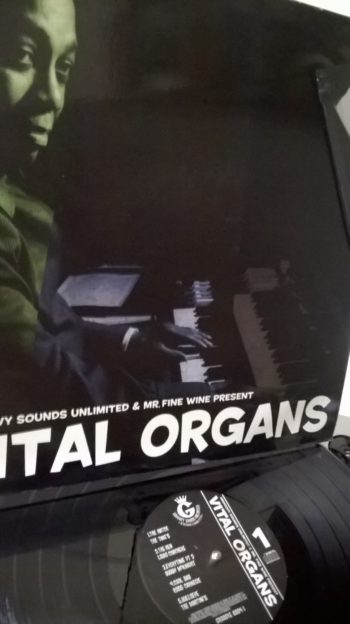 It’s a known fact that funky organ instrumentals provide all five of your daily butt-shaking requirements and if the likes of Jimmy Smith, Richard ‘Groove’ Holmes, Jimmy McGriff et al ever meant diddly to you, the chances are you will welcome a dose of this long out of print long player. The ten tracks were compiled and annotated by Mr Fine Wine, aka 45 collector Matt Weingarden (his uncle taught John Lee Hooker to play standard guitar chords) who can be found cooking up a beast of a soul stew for Daptone Records on Mixcloud. In other words, you’re in safe hands.

It opens in the Mid West with The Hatch, a juicy slab of punch-drunk Michigan funk courtesy of The TMG’s – the party-starting name adopted by producer Tommy McGee who was only 13 when he made this stormer. It sets a high bar, one that Louis Chachere’s The Hen, recorded in a cave in Missouri and released in two parts on Paula Records in 1969, is more than equal to with its snare drum snap and swinging jazz guitar.

Ross Carnegie’s Cool Dad on his own El-Con label will leave you breathlessly wishing your old man could make the Hammond gurgle like a spouting well spring before Bullseye by Memphis-based The Martinis adds some genuine stardust to proceedings in the shape of uncredited Stax and Hi legends Steve Cropper, Booker T Jones and Teenie Hodges and future Big Star producer John Fry at the controls. The Martinis was one of several noms de disque adopted by Charles ‘Packy’ Axton, son and nephew respectively of Stax co-founders Estelle Axton and Jim Stewart. Having fronted the original Mar-Keys, Packy fell out with his uncle, left Stax and went on to record independently.

Greasier than a truck stop breakfast Toussaint McCall’s driving R&B dancer Shimmy was culled from the flip of his 1967 Ronn Records hit Nothing Takes the Place of You, sampled in No Static At All by hip hoppers 3rd Bass and provided a blueprint for Stevie Winwood in the Spencer Davis Group’s version of I’m A Man. Classy kit indeed. ‘For your information; this is soul power,’ chirps Jimmie Willis at the top of his Orr Records 45 Soul Power and he ain’t wrong, no sir. His B3 flute stops are set to ‘stun’ as he blows the dancefloor away on the first of a late 60s two-parter. The mid-point build up and breakdown practically writes the book on the arrangement device.

Closing out is the mighty Fillmore Street Soul Rebellion’s righteous invocation to Put Your Weight On It, a heavy-heavy mod funk dancer from 1971. It was written by bandleader and producer Ruby Ray Moore, the profane comic actor and who achieved acting fame as randy, raunchy Blaxploitation street hero Dolemite, an inspiration cited by Snoop Dogg and about to be reprised on film by Eddie Murphy.