Nick Churchill > Blog > The Vinyl Say 023: The Rock Machine Turns You On 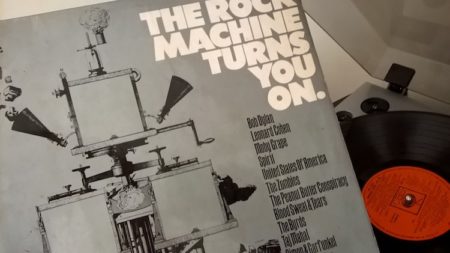 Now! That’s What I Call… The Original! The Rock Machine Turns You On is the first bargain priced sampler album, released in 1968 to promote the Columbia Records (then known as CBS outside the US) catalogue to the long hairs in Europe, Australasia, Canada and South Africa.

Whoever was the wordsmith in the Columbia copywriting department, they couldn’t have put it better than in the company’s Billboard ad, managing to both downplay and overplay the release in just a couple of sentences: “The Rock Machine… it’s the happening sounds of today. Out of it comes the biggest, hottest rock list that ever started off any month. And with our Columbia Rock Machine, the most exciting and meaningful merchandising campaign we’ve ever devised… It’s all here – the talent, the product and the big concept to make it all happen. Now, doesn’t that turn you on?”

Priced at 14s 11d (about 75p) it cost less than half the price of a proper elpee in those days and is thought to have sold a cool 140,000 copies, enough to earn it the number 18 spot on the Albums Chart and play a large part in establishing the likes of Leonard Cohen (represented by Sisters of Mercy) and Spirit (Fresh Garbage) outside their native US.

Indeed, of the 15 acts on the record only Bob Dylan (I’ll Be Tour Baby Tonight) and Simon & Garfunkel (Scarborough Fair/Canticle) enjoyed any kind of international chart action and both the featured tracks had been available for months. The track listing represents a reasonably well-selected trawl of the Columbia roster of the time from out-and-out rock types like Moby Grape (Can’t Be So Bad) and Elmer Gantry’s Velvet Opera (Flames, later covered by Led Zeppelin), through folkies (Tim Rose, Come Away Melinda; Roy Harper, Nobody’s Got Any Money in the Summer), freaks (United States of America, I Wouldn’t Leave My Wooden Wife For You Sugar; Peanut Butter Conspiracy, Turn on a Friend), and funk rockers (Blood Sweat & Tears, My Days Are Numbered)

Minds drift as The Byrds weigh in with Dolphins Smile and The Zombies add the always-essential Time of the Season; while the blues end is held up by Taj Mahal (Statesboro Blues) and The Electric Flag (Killing Floor) with Mike Bloomfield in blistering form before the band’s drug-stained disintegration.

As a sampler, The Rock Machine Turns You On does exactly what it should – it samples.