Of all the places that ‘had their moments’ according to the lyric of John Lennon’s elegiac song In My Life, 46 years since its release, Bournemouth fits the sentiment as well as any that figure in the history of The Beatles.

Still revered as one of the greatest – and most commercially successful – groups of all time, The Beatles’ story fascinates music fans as the minutiae of their career are investigated for extra meaning, some new clue to better understand Four Lads Who Shook the World as Arthur Dooley’s sculpture overlooking Mathew Street in Liverpool proclaims.

Today’s music stars rarely visit any town more than once every year or two, but although the workload didn’t compare with their gruelling residencies in the flesh pots of Hamburg where they would perform for up to five hours a night, six days a week, The Beatles played 18 shows in Bournemouth – two houses a night – in just 14 months from August 1963 to October 1964. Even by the exacting standards of the day, when rock music had yet to establish its own terms and groups still complied with practices retained from Victorian music hall, it was a punishing schedule.

The Beatles first arrived in Bournemouth on 19 August 1963 to open a six-night summer season at the Gaumont cinema (now the Odeon), on Westover Road. They were already big stars, having seen their third single, From Me To You, top the charts – the first of 11 consecutive number ones. 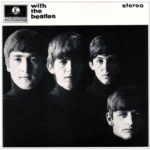 All week police officers had patrolled Westover Road as fans occupied the Pavilion car park opposite the Gaumont and the adjacent Palace Court Hotel where any glimpse of a mop top would elicit fresh screaming. Inside, history was being made as the first of the band’s memorable photo shoots took place.

Easily ranking alongside Peter Blake’s Sgt Pepper sleeve and Iain MacMillan’s cover shot for Abbey Road, Robert Freeman’s iconic half-shadow photos are among the most instantly recognisable symbols of the age. Shooting on an improvised set in the hotel dining room, by his own account Freeman took innumerable pictures of The Beatles, the first and most iconic of which appeared later that year on their second album, With The Beatles.

Also at the Palace Court that week George Harrison wrote Don’t Bother Me, his first Beatles song, while stuck in his room suffering a heavy cold. In a letter to a fan on Palace Court headed paper Harrison politely fielded a question about the screaming, writing: ‘We don’t mind girls screaming in the noisy numbers, but I think we would prefer them to be a little quieter in the slow songs.’

As for the actual shows, The Beatles topped a bill that included Billy J Kramer and the Dakotas, Tommy Quickly, Gary and Lee, The Sons of the Piltdown Men, compere Billy Baxter and light entertainers the Glamorous Lanas and Tommy Wallis & Beryl. The Beatles Monthly magazine reported the trip in detail noting their new stage gear of black velvet jackets and grey pinstriped trousers; while revealing that, contrary to previous statements, John Lennon was married to Cynthia. In fact, they celebrated their first wedding anniversary in Bournemouth, which went unreported, as did any mention of their four-month-old son Julian.

On the Friday of that landmark week The Beatles released She Loves You, giving the world the ‘yeah yeah yeah’ refrain that has become shorthand for the era. It’s still The Beatles’ best selling UK single and by the time they returned to Bournemouth to play the Winter Gardens on 16 November was on its way back to number one as the nation was gripped by Beatles fever. The Daily Mirror had even given it a name a fortnight before – Beatlemania.
It was a busy Saturday in Bournemouth – Father Christmas was making his annual procession from the station to the Square, the 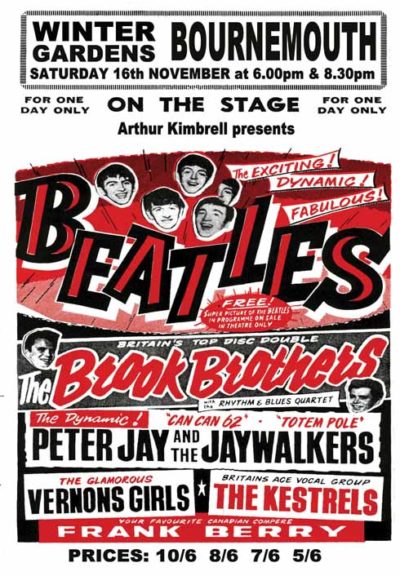 Cherries were playing an FA Cup game at Dean Court and a round-Britain car rally was ending in the town. Police had been on duty outside the Winter Gardens for days as fans camped out to buy tickets and delivered letters, autograph requests and presents – including a 16lb cake.
The audiences were far wilder than those at the Gaumont in August, all but drowning out the group, who had to be delivered to the theatre foyer in an unmarked police van. One fan was so hysterical that she required treatment in hospital.

Adding to the mayhem were American television crews from the three major networks – CBS, NBC and ABC. All wanted to be first to show footage of The Beatles and CBS won the day with London bureau chief Alexander Kendrick narrating a scabrous denunciation of The Beatles ‘playing non-music, wearing non-haircuts, giving non-mercy’ and reporter Josh Darsa’s interview capturing Lennon and McCartney backstage in characteristically sarcastic mood. That report aired in the morning of 22 November, but by lunchtime President John F Kennedy had been assassinated and the full report wasn’t shown until 10 December.

The Beatles landed in New York in February 1964 with their latest single I Want To Hold Your Hand at number one as America succumbed to their charms. Six months later, when they came back to Bournemouth to play the Gaumont on 2 August, their first film, A Hard Day’s Night, was in cinemas and they were about to return to the States for their first full concert tour.
The show featured a hastily assembled supporting bill, most notably The Kinks, whose singer Ray Davies has identified the night as the start of a mini feud between his group and The Beatles after Lennon and McCartney mocked the nervous newcomers.

The Beatles’ final Bournemouth shows, at the Gaumont on 30 October, were part of a UK tour that saw them champion the music of black America that had influenced their songwriting from the earliest days. Principal support Mary Wells became the first Motown act to perform in the UK, although she was only able to do so because she was in a dispute about money earned by her biggest hit, My Guy, that ultimately brought her Motown career to an end.

And that was the last Bournemouth saw of the Fab Four as a performing unit although the area continued to play a part in Beatles lore. In 1965, John Lennon spent £25,000 on Harbour’s Edge, a waterside bungalow at 126 Panorama Road, Sandbanks, for his aunt Mimi, who had brought him up from the age of five. Lennon described it as ‘one of the loveliest places in the world’ and he was a frequent visitor, enjoying boat trips in Poole Harbour. Mimi later recalled: ‘he used to just appear. He’d fling himself on the settee and say how lovely it was here, so quiet.’

It was on such a visit, on 14 March 1969, that John – who had divorced Cynthia the year before – announced he was to marry Yoko Ono and sent his chauffeur, Les Anthony, to Southampton to find out if they could marry at sea. They couldn’t, so a jet was chartered to take them to Paris, from where they left to ‘get married in Gibraltar near Spain’, as related in The Beatles’ final number one, The Ballad Of John and Yoko.
John Lennon never returned to his homeland after moving to the United States in 1971 and Mimi was at home in Sandbanks when she heard on the radio of his murder in New York on 8 December 1980.

‘It was the greatest blow I had ever had. When his records come on the radio I have to turn it off. Lots of people suffer terrible blows. I must not get full of self-pity,’ she said, just a year later.
Finally, following Mimi’s death on 6 December 1991, Lennon’s two wives and their sons Julian and Sean attended Poole Crematorium for the funeral service. The surviving Beatles and their families sent wreaths.
Harbour’s Edge was razed in 1994.

• Yeah Yeah Yeah: The Beatles & Bournemouth is available at a special price direct from the publisher.