The celebrated pet cemetery at Max Gate is an unequivocal declaration of Thomas Hardy’s love of animals and his epitaph for his beloved, if unruly, wire-haired terrier Wessex is a testament to his rarely heralded mastery of brevity. It says, simply: ‘Faithful. Unflinching.’

It’s little surprise to find Hardy was a member of the RSPCA, indeed, he wrote a poem to mark the organisation’s centenary in January 1924 and made a bequest to it in his will. He was an ardent anti-vivisectionist, his wife Emma hosted anti-vivisection meetings at Max Gate and in 1909 he wrote: ‘the practice of vivisection, which might have been defended while the belief ruled that men and animals are essentially different, has been left without any logical argument in its favour.’

He also protested against the blinding of caged birds for sport and supported a campaign by veterans of World War 1 to have the practice outlawed, which it was in 1920. Hardy had been sickened by the Flemish practice of Vinkensport in which finches are made to compete for the highest number of birdcalls in an hour. In the belief that birds sang more without visual distraction, the finches were routinely blinded with hot needles before competing*.

He wrote about it in his melancholy poem The Blinded Bird, published in Moments of Vision, a collection of works written in 1912 and 1913 that also includes The Caged Goldfinch in which he contemplates the fate of a goldfinch abandoned in its tiny cage on a recent grave.

The goldfinch has been seen as a symbol of good fortune and loaded with allegorical meaning since the Middle Ages, frequently appearing in religious paintings – including The Goldfinch, the 1654 painting by Carel Fabritius that inspired Donna Tartt’s 2014 Pulitzer Prize-winning novel of the same name.

The red flash of the goldfinch was a sign to medieval Christians that, like the robin, it had acquired blood-coloured feathers at the crucifixion of Christ trying to remove seeds from the thistles in the crown of thorns. In medieval times thistles were thought to combat the plague and gold was considered a colour that could cure sickness. Thus, the goldfinch was believed to be a symbol of endurance, an allegory of the salvation Christ would bring through his sacrifice. 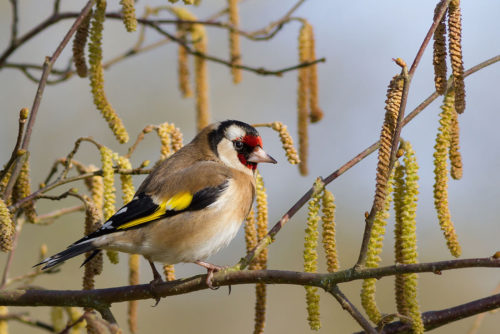 None of which was lost on Thomas Hardy whose finch poems recall the earlier appearance of a caged goldfinch in The Mayor of Casterbridge (1886) when, in an act of contrition, Henchard visits his stepdaughter Elizabeth-Jane on her wedding day with the gift of a goldfinch in a cage as penitence for his previous bad behaviour. When she dismisses him, the bird is left behind and found days later starved to death, prompting Elizabeth-Jane to go in search of her stepfather to forgive him. Too late, she finds he has suffered the same fate as the bird, starved to death in a metaphorical cage of his own past actions.

In his assessment of The Blinded Bird, Mark Richardson, Associate Professor of English at Doshisha University, writes: ‘It is nigh impossible to read this without feeling in it an intimation not simply that God might ‘consent’ to indignities such as these … but that there is no God at all: ‘divinity’ and ‘charity,’ such as they are, are here, on Earth, with us – indeed, in a finch – or they are nowhere. The Blinded Bird puts everyone to shame.’

What motivated Hardy’s pre-occupation with animal welfare in his later years has long divided opinion among students of his work. Some say it was born of his generally gloomy view that evolution serves only to make suffering universal for both man and beast; whereas others attribute a note of hopefulness in his concerns, that mankind is ultimately able to elect to take a more ethical view of the animal world.

‘What are my books but one plea against ‘man’s inhumanity to man’ – to woman – and to the lower animals?’ Hardy told writer and critic William Archer in Real Conversations (1904, W Heinemann).

The last stanza of The Blinded Bird revises the Biblical text from St Paul’s first letter to the Corinthians and many scholars point to the poem as further evidence of Hardy’s growing agnosticism. Where St Paul finds godliness in mankind’s capacity for charity Hardy finds it in the bird in the cage, the victim of such ungodly cruelty and another indictment of the way we treat the natural world.

Nature in all its forms was a constant in Hardy’s writing throughout his career, but he had a particular affinity with animals. In his autobiography he relates how a snake was found curled up beside him in his cradle and recalls crawling into a sheep-pen as a child in order to imagine how it felt to be a sheep. As an old man he pities the payload of the cattle trucks that drove past Max Gate.

In Afterwards, the grand finale of Moments of Vision, Hardy considers his own demise and hints heavily at how he would like to be remembered. Hoping that after he ‘had been stilled at last’ people would remember how he enjoyed seeing the new green leaves of Spring, or a hawk perched in the thorns, or watching a hedgehog cross the lawn and say: ‘He was a man who used to notice such things.’