Few places on Earth are completely immune to change, but lovers of Thomas Hardy’s writing must count themselves fortunate that large swathes of the Dorset landscape are proving remarkably resilient. To those attending the 22nd biennial International Thomas Hardy Conference and Festival the appearance of the Dorset landscape is essential to the understanding and enjoyment of his novels, stories and poems.

‘It’s a cliché, but it’s true that Hardy’s books always have an additional character in the landscape so we run coach trips around Hardy’s Wessex to the locations he wrote about,’ says Mike Nixon, secretary of the Thomas Hardy Society, which organises the conference, which, ‘has a broad-based appeal and aims to bring Hardy’s world alive so it’s a full seven days of events and there’s plenty to do.

‘We know Hardy loved music and there are musical entertainments that are part of the conference and festival as well and we have Colin and Ruth Thompson from the Casterbridge Band to lead our barn dance this year.’

Naturally enough the conference is based in Hardy’s Casterbridge – at the United Church in Dorchester’s South Street – and even more aptly so as this year marks the 120th anniversary of the publication of The Mayor of Casterbridge and town crier Alistair Chisholm will lead an afternoon walk around Casterbridge to be followed by an evening’s entertainment at Max Gate with the New Hardy Players.

‘To my mind, The Mayor of Casterbridge is very much a modern story,’ says Mike, it’s about ‘a man who was 21 years teetotal and whose life was in order, then he takes a drink and slips down the greasy pole.’ 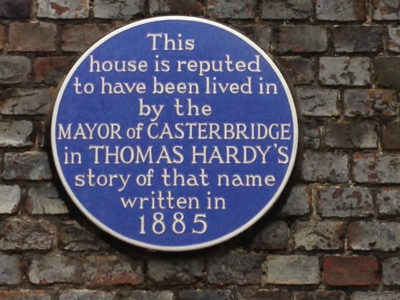 The conference is to be opened at the Thomas Hardye School by Julian Fellowes, the president of the Thomas Hardy Society, and followed by a dinner at which the celebrated poet Simon Armitage CBE, the Oxford Poetry Chair, will be guest speaker.

‘Just like any literary society, almost by definition, we found our active membership is quite old so we have quite unashamedly gone after ways to attract young people. Hence the call for papers, so that young people who have quite recently completed their degrees are very welcome to come and talk to us about their work. ‘

To date the conference has attracted delegates from some twenty different countries: ‘Hardy is very popular in the United States as you’d expect, but also in Japan where there seems to be a cultural connection. The last conference attracted young delegates from Pakistan and India and a young woman from Nigeria as well; the Society has an educational trust so that young people who may not be able to get sponsorship are able to attend the conference with a bursary, the Frank Pinnion Award, which commemorates a former vice-president.’

Last year’s film adaptation of Far From the Madding Crowd obviously focussed a great deal of attention on Thomas Hardy and this part of the world, particularly West Dorset, and the Society reaped the benefit.

‘It was very good for us and we had 80 to 100 new members as a result of it,’ says Mike. ‘Our membership now stands at 850-900, which is pretty healthy.’
Hardy’s presence in Dorset is quite visible and becoming more so without feeling overplayed: ‘The cottage at Bockhampton has always been popular of course, but the work the National Trust has done at Max Gate has been terrific and I think visitor numbers were up 20,000 last year.’

The Thomas Hardy Society puts a great deal of energy into promoting the sites associated with the author. Last year it co-produced a leaflet, ‘Exploring Thomas Hardy’s Dorset’, with West Dorset District Council, securing one of the first film stills of actress Carey Mulligan in Far From the Madding Crowd to be published, and has enlisted the support of Dorchester Town Council to put up a banner across South Street during this year’s conference and festival.

It’s unlikely such opportunism would have been lost on Hardy and perhaps serves to remind us that the world of today is not so very different from that which Hardy knew, as Mike acknowledges: ‘If we are to keep his work alive we need to make that point as often as we can. If you look in Hardy’s novels there are lots of parallels with today’s world – in Tess… it’s the equality of the sexes; in Jude… there are those darker elements to the story that resonate with readers today. Hardy was quite a radical and wrote fully rounded female characters that were strong, independent, single minded; that was quite unusual for the era in which he was writing. His views on social order, animal rights, the countryside, all of these things chime with the news today and that’s what attracted me to him as a writer and what continues to hold my attention.’

Along with his novels and short stories, more attention has been paid in recent years to Hardy’s poetry – something that Simon Armitage, a long-standing devotee of Philip Larkin upon whom Hardy exerted a great influence, may well address. ‘Those poems of 1912-1913 in which Hardy articulates the loss we feel about the departure of a loved one are as good as anything his contemporaries were writing,’ says Mike. ‘There can be real comfort in finding words someone has written about the things we feel that can really help us through our darkest hours.’

Indeed, and for all the natural beauty and raw cruelty of the landscape that inspired Hardy, it is perhaps the way in which he rendered human emotions, the best and the worst, that ensures his place in the pantheon of Britain’s greatest writers. Unsurprisingly he put it best in his own words when he said: ‘To find beauty in ugliness is the province of the poet.’