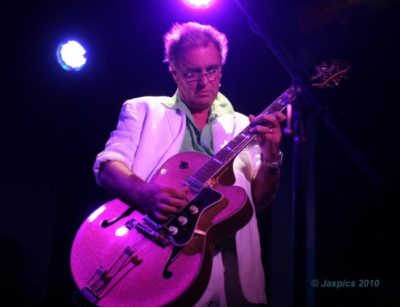 The less generous annals of British rock history record Terry ‘Superlungs’ Reid as one of music’s nearly men and his story a series of what-might-have-beens – the man who turned down the singer’s job in Led Zeppelin and Deep Purple, who opened for the Stones, Yes and Cream and counted Clapton and Graham Nash as fans and collaborators, but who never scored the hit that would have made his name.

That’s not even half the story though. Steeped in rhythm and blues, the teenage Reid was possessed of a soul shout to rival Steve Marriott’s and as he grew into his own ideas he pushed that R&B blueprint just as far as Steve Winwood or Van Morrison.

Recording hours and hours of tapes to hit on the moments of mastery, his lasting legacy is at least two classic lost albums of the 70s – The River and Seed of Memory.

And it is in the spirit of those records that he’s in Wimborne in support of an album of River out-takes.

Rambling, shambling, meandering, Reid and his infinitely trusting rhythm section – bassist Jennifer Maidman and drummer Phil Gould – create mercurial magic in the latent grooves of To Be Treated Rite, the earthy Brave Awakening and the sprawling version of Seed of Memory that closes the set.

He steers the Beach Boys’ Don’t Worry Baby into choppy waters, leaves an anecdote about Nick Lowe and the London Palladium hanging in the ether, finds his inner crooner for a mid-song segue into Sam Cooke’s You Send Me and uses possibly his best known song Without Expression (recorded by The Hollies and Crosby Still Nash & Young) to sing a story about stealing a car to see The Action at the Marquee. He leaves us sharing the good news that Superlungs prevails – he’s been given a clean bill of health.

At times shambolic, at others utterly sublime, Terry Reid’s quicksilver charms are the stuff of a true legend.