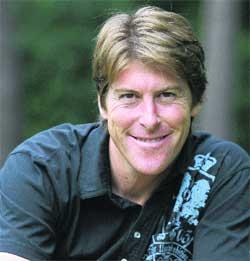 While David Beckham chose to see out his playing days in LA, his one-time England team-mate Darren Anderton opted for DC Dean Court, that is.

Last summer, the former Tottenham midfielder, whose career had been blighted by a series of injuries that would have finished a lesser athlete, found himself cast adrift without a club having been released by Wolverhampton Wanderers.

After years of groin, knee, hamstring and Achilles tendon problems, that earned him the nickname “Sicknote” and limited a promising international career, he considered a move to America, but decided what he really wanted was to come back south and take advantage of living in his adopted home town, where he’s had a house since 1996.

That he also ended up signing for AFC Bournemouth was the icing on the cake as far as Darren was concerned.

“It’s a wonderful place to live, so it was mainly location, but signing for Bournemouth worked out just fine,” says the Cherries’ newly appointed club captain as we sit by the pool in the garden of his home in Branksome Park, Poole.

It’s modern, but not at all the gaudy palace of a football prince. There are security gates and a selection of none-too-flashy motors in the driveway. Inside, it’s all tasteful furnishings and clean lines, while outside is the pool and hot-tub, sundry gas cylinders for a giant barbecue and – best of all – a metal-framed goal set up at the bottom of the garden.

It all seems very Darren Anderton – tidy and unshowy, much like his football.

He tells me he’s genuinely happy, even a little surprised, to be playing at the age of 35 after countless pundits had written him off. He clearly loves the area and enjoys the home he shares with Katie, his girlfriend of eight years, who prefers not to be photographed.

“We’re not very organised, we’re having a new study done so we can push some of the stuff in there and shut the door,” he explains, as Katie asks him to choose some cabinet doors.

Forget football’s showbusiness excesses for a moment, this is how it should be – a top player enjoying the rewards the game has afforded him and taking pleasure in his football again. Not that Darren would ever claim it, but he’s giving something back to the grass roots of the most glamorous sport in the world.

I always thought Beckham could have done the honourable thing and gone back to his roots by turning out for Leyton Orient, say, rather than take multi-million dollar deals in the US.

“Yeah, I could see that,” says Darren.

Probably wouldn’t have pleased his missus though? “Well, there you go… ”

And, lest we forget, Anderton is a hell of a player – at his best he was better, faster and brighter than Beckham. A right-sided midfielder who can play wide or in the middle, he is a master at linking passes for groups of players, or guiding 40-yarders to switch play or split defences. He can rifle in a decent free kick or punch a 25-yarder towards the top corner, but he’s a team player not a prima donna.

He has notched up 30 England caps (the first 28 of which found him in the starting line-up), scored in the 1998 World Cup finals and played alongside, or against, the greatest players of his generation, from Gazza to Zinedine Zidane.

“Yes, football’s been good to me, of course it has. I’m very lucky and very grateful,” he smiles.

“It can be cruel though. My brother Ben was on Portsmouth’s books as a youth player, then had trials at Tottenham, but broke two bones in his leg the day before my first England game. His career was over just as mine was going to the next level.”

However you slice it though, it’s a great life. At Bournemouth, Darren doesn’t have to be at work until 10 in the morning, and doesn’t start working until half-past. He gets the afternoons off to recover for the next day’s training and turns up to play the match on a Saturday afternoon. 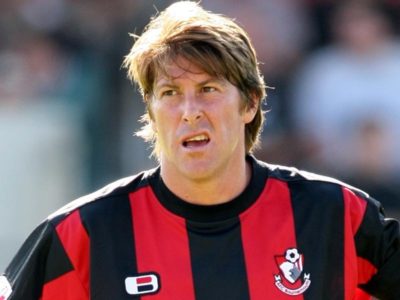 I wonder if he’s ever had a “proper” job. “No, not really,” he laughs, flashing me one of “those” looks that suggests I might have strayed right up to the line, if not crossed it altogether.

“I’ve cleaned boots and pumped up balls and I’m quite happy to clean my own boots at Bournemouth. I’ve paid my dues, but like anything where you’re paid for doing what you love, it can’t really feel like a job.”

You must have your moments though?

“It’s your friends and family that keep your feet on the ground. I remember walking out at Wembley for England v Scotland, and I was checking the stands for my dad and mum. Dad’s Scottish, so he’s happy. Mum’s pointing two rows in front – I wondered what she was on about then I saw Rod Stewart there, and she’s a huge fan.

“So, it’s a dream for me, but great for them as well, and they were always so supportive. Dad always said enjoy it while you can, because it won’t be forever.”

By his own admission he’s a very laid-back, placid person, until faced with something he can’t do – usually on the golf course. He likes to go out to eat, or to the cinema, but not for him the round of celebrity parties, papparazzi and the high life.

“The fame side of it is not for me, we’re not into all the WAG nonsense.

“The most important thing is to enjoy it, money’s nowhere. I can’t see another five grand will make a difference when you’re on 50 or 60 grand a week, I can’t understand that.”

I tell him about a friend of mine who, with a mate, also aged about 13 or 14, spent an entire train journey to London watching Darren Anderton. It was more than a decade ago, but the two lads were transfixed, as if one of the Immortals had strolled down from Olympus.

“Were they? That’s funny. I never mind any of that stuff; they’re fans, it’s what it’s all about.

“I remember as a kid I used to watch Southampton all the time; they were my home town team and I used to dream about playing for them. 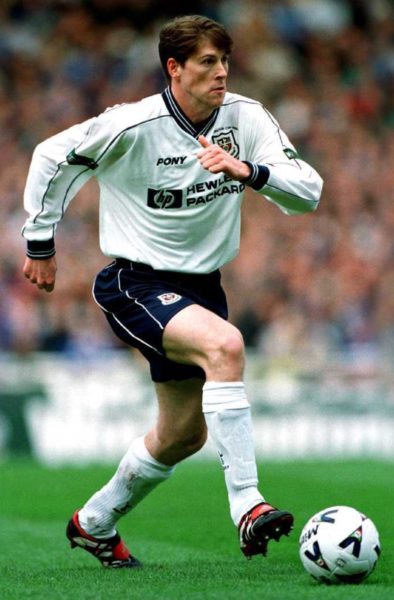 “One day Kevin Keegan was playing cricket over the back of where we lived. We went down there and he took time to sign autographs for everyone and have a chat.

“That stuck with me. If someone’s nice to you, it costs nothing to be nice back.

“The Portsmouth-Southampton thing was pretty full-on though. A while back, I was out for a meal on a Sunday afternoon in a pub near Southampton, and these Saints fans started on at me about Portsmouth and all that.

“It started to get nasty, then some other people said to leave me alone – and they started on them as well.

“To be honest, that’s part of the reason I came over to Bournemouth, to get away from all that silliness.

“You have to take the rough with the smooth if you put yourself in the public eye, but I’ve seen players calling reporters to tell them where they’re having dinner that night to make sure they’re seen. It’s not that hard to be private if you want to be.”

And what of the future? Apart from a few away fans’ taunts, the Sicknote stigma has finally been laid to rest. He’s playing well and working hard to confound those who have already written Bournemouth off as relegation fodder, even though the season is just a few weeks old.

Teddy Sheringham still plays regularly for Colchester United at the age of 41, so could Darren emulate his good friend and former teammate?

“The fans have been great at Bournemouth, and so have the lads. I feel better this year than when I came here, and there’s no reason I won’t be playing next year. That’s about as far into the future as you can look, but why not, another five years? Wow!”