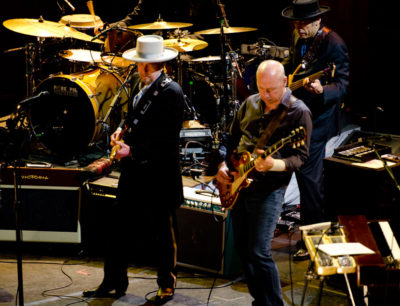 It takes a while to adjust, but somewhere in that weird croaking belch of a voice are the lyrics to Leopard Skin Pill Box Hat and amidst those slightly out of kilter organ stabs its creator tries to make a new space for the song to inhabit.

And so, a fairly standard 30 minutes after he was due on stage and following some ludicrous entrance tape about “emerging from a period of substance abuse in the 60s and finding Jesus in the 70s, Columbia recording artist Bob Dylan” begins another night on the Never Ending Tour, now well into its 23rd year.

A fair portion of the BIC audience on Friday would not even have been in their teenage years the last time Dylan came this way (2006) and most were barely born when he was hitting his creative stride in the mid-1960s, but stick around the bar long enough and you would’ve heard more than your share of Isle of Wight, summer of ’69 tales. More than that you could’ve checked out the stylistic diversity of a 21st century Dylan crowd – from the glammed up party dolls, father/son twosomes and the groover in the bondage trews and ox-blood Martens, to the men who would’ve been at C&A and the ladies who iron their socks. Suffice to say, it’s a broad church.

And the reason they’re here is that a 70-year-old enigma has again decided to swing by, mumble his way through a few of his back pages and be on his way. There are none of the showbiz trappings associated with rock heritage shows – Dylan doesn’t even speak until he introduces his band at the end – not even to herald the mid-set appearance of opening act Mark Knopfler. Any previous duets on this tour have gone unreported and given the history the two share (Slow Train Coming, Infidels) this should have been ‘a moment’. As it was Knopfler did little more than get in the way and rattle off a series of perfunctory solos on a Les Paul that sounded at odds with the prevailing Telecaster twang.

But, aloof as he is, Bob knows a thing or two about working a room, turning the soulless, cavernous Windsor Hall into a remarkably intimate setting for a show that reaches to the long converted. He’s helped to a huge extent by a sensational band driven by George Recile’s rampant drums and Texan guitar-slinger Charlie Sexton’s edgy, fluid stylings which owe much to Robbie Robertson’s impact on Dylan’s embrace of electricity all those years ago.

True, the Dylan voice of old, a wayward beast at the best of times is gone but he did play some guitar tonight, thereby laying the myth about his arthritic hands. His harp playing is at times erratic, at others inspired and when he gets to take an organ solo you can feel his musicians are ready to catch him in case he falls. But for all that, there’s something inspiring, joyous and downright awesome about seeing Bob Dylan.

He rattles out a killer set list, retooling once-familiar songs to take account of his new vocal limitations. If Highway 61 Revisited and Desolation Row deftly re-engage the audience, This Wheel’s On Fire and Tangled Up In Blue don’t fare quite so well but even they have a whip-smart energy, Love Sick (from 1997) crashes his recent work into focus, before nailing transcendent versions of Blind Willie McTell and the pulsing Ballad of a Thin Man, before a beefed up remodelling of All Along the Watchtower and the anthemic Like A Rolling Stone obligato close the show.