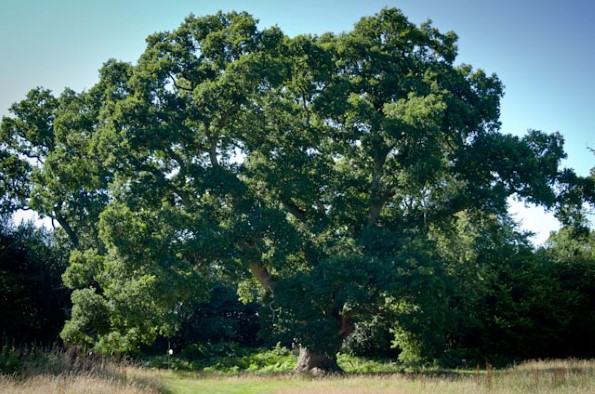 The Isle of Purbeck is home to the UK’s largest known black poplar and white willow trees. The management of these trees is still in its infancy, but we need to be identifying the veteran trees of today.

It is sometimes said that a man of taste will find beauty in a tree that others condemn for decay. There’s something extraordinarily primal about standing inside a hollowed trunk encased in living tissue that has been growing for a thousand years.  What may well have been a sapling when King Edward the Martyr was murdered at Corfe Castle in 978 is now a gnarled, bent, twisted, long-armed beast of a tree that has stood implacably as century after century passed beneath its mighty boughs. And just as time leaves its marks on the human form, so too it scars these woody sentinels of history, eating away at their insides and clawing at their branches; yet the tree prevails – sentry to a world long gone. 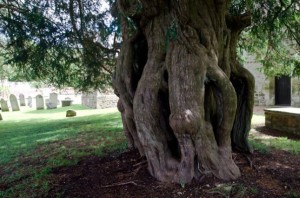 The Ancient Tree Hunt is a Woodland Trust project that aims to record 100,000 ancient trees throughout the UK by the end of 2011. These are trees that inspire awe and mystery; living eco-systems supporting wildlife that cannot exist elsewhere. Some of them have played their part in human history, but most have quietly gone about their business largely untouched by human hand.

Dedicated arborist, James Leaver, has visited some of Purbeck’s grand old men of the woods and has been seeking out prime examples of the UK’s thirty-three native trees. There are plenty to choose from in these parts – from 500-year-old oaks standing in 200-year-old wildwood that was pastureland at the time Corfe Castle was slighted, to haphazard yew trees older than the Anglo-Saxon churches in whose yards they stand.

But he didn’t expect to register a pair of champion trees barely half a mile apart in the sunken valley of the Corfe River on the afternoon he took PURBECK! on a tree hunt. They’re well off the beaten track, but this area is home to the UK’s largest known black poplar and white willow trees.

“The black poplar is a classic example of a tree that is pollarded by wind. When the canopy throws out branches that are too exposed they are blown away, which contracts the crown causing the base to grow stronger. The canopy tends to fall in on itself so the tree doesn’t grow upwards, but it does expand”, says James, explaining why the thick, knobbly trunk of a time-ravaged, brittle-barked tree is the way it is. 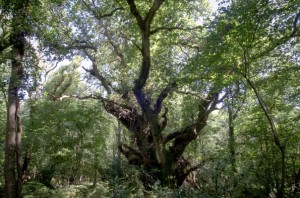 Once widely cultivated for use in shipbuilding and post-medieval construction, the native black poplar (right) – which features in Constable’s famous 1821 painting, The Hay Wain– is now rarer than the giant panda with just 2,500 specimens remaining in Britain, of which only 400 are females. It thrives in marshy, low-lying, nutrient-rich soil but the gradual draining of Britain’s flood plains for farmland over the last 200 years, along with woodland clearances during WW2, have severely restricted its natural habitat.

“Black poplars are much faster-growing than oak but they don’t tend to live very much longer than the human life span, so this one was already quite special before we measured it. As for age, it’s hard to say because there are so many variables, but a comparable black poplar in Somerset that is known to be 350 years old measures 450cms, so I’d say this one definitely saw Corfe Castle in its heyday before the Civil War.”

The British standard for measuring trees is to run a tape around its base at roughly breast height, about 150cms from the ground. Unnoticed by nearby anglers, our black poplar sits on partially-collapsed riverbank half-hidden by Japanese knotweed, brambles and bamboo. 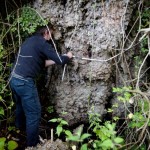 Getting a tape around it is a prickly struggle, but at 730cms it’s some 30cms bigger than the previous record holder.

Later, James is waist-deep in a rain-swollen Corfe River, sizing-up another record breaker, this time a white willow which, at 810cms, adds a good 60cms to the previous Tree Register champion. The willow has long since surrendered its internal organs and decayed frontage to the water which has partially undermined its roots, forming a U-shape in the bank as it leans over the river. Measuring it and staying dry at the same time is impossible, but it’s well worth the wade. Dog walkers pass by on the other side of the meadow as we crown another winner.

“The white willow is another quick-growing tree and this one would have started growing a couple of metres away from the bank. Erosion over time has changed the shape of the river so it is now right on the bank, but the wider landscape here has hardly changed in centuries and it has been left to grow. It has to be at least 300 years old as there are planting records that show 100-year-old white willows with a girth of about 250cms.” 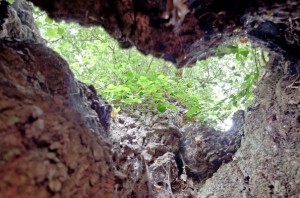 There are half a million listed buildings in the UK but far fewer trees, yet each one is a living relic of times past, a document of how we lived and how the landscape looked. They’re arguably as much a part of our cultural ancestry as stately homes, cathedrals and works of art.

“It’s more than that,” says James. “It’s about the future as well. The management of these trees is still in its infancy, but we need to be identifying the veteran trees of today that are starting to decay and resist the urge to tidy them up or fell them because they are the ancient trees of the future and should be left to nature.”