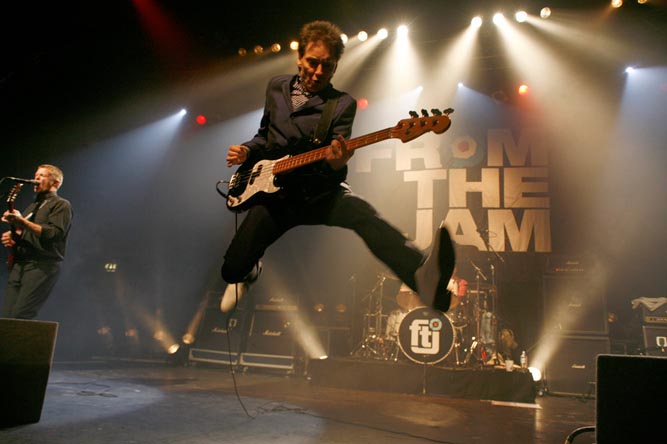 That’s the gist of the half-hour chat I had with one of my boyhood idols – former Jam bassist Bruce Foxton – in the summer of 2010.

The first time I saw The Jam I wasn’t even a teenager and the sense of loss felt when the band’s front man and main songwriter Paul Weller split the band up on the eve of my 16th birthday in 1982 was palpable.

But none of us felt as angry or betrayed as Bruce and drummer Rick Buckler. Embittered by their former school friend’s decision, years of acrimony and at least one court case followed. In 2006, Weller and Foxton met at a Who concert, chatted and parted warmly. They further bonded when Weller got in touch with Bruce again after hearing his former bandmate’s wife Pat was ill with cancer. The two finally got together again to make music for the first time since The Jam’s last shows in December 1982 when Bruce contributed to sessions for Weller’s Wake Up the Nation album.

Pat died in April 2009, a couple of weeks before Paul’s dad John who had managed The Jam from the working men’s clubs of Woking to Wembley Arena. Foxton and Weller found themselves drawn closer still by the search for positives in the wake of such tragedy.

But for all the healing, that it also precipitated the end of Rick Buckler’s involvement in From The Jam, the band he and Bruce had put together in 2006 to play The Jam’s songs, only serves to prove the point at which we came in.

So what went on Bruce?

The honest answer is that I really don’t know what went on with Rick. All I know is that he sent me and Russell [Hastings, From The Jam singer/guitarist] an email last September saying he felt he could no longer play a part in From The Jam.

Nothing to do with you working with Paul then?

A lot has been written about it being something to do with me being friendly with Paul again, and I’d be really sad if that was the case. We’re all well into our 50s now, that would be silly. The initial dispute was over a management issue – me and Russell thought we couldn’t afford to keep the manager on, Rick did. The next thing we know Rick’s quit which was really frustrating as we’d worked hard to get the band to the point we had. Just goes to show you never know what’s going to happen.

I’m sure you know that more than most of us Bruce. How did it feel to be working with Paul again after so many years and at such a tumultuous time for you and you’re your family?

Paul was very kind when he heard my wife was ill and, well, we repaired our friendship and I’m in touch with him again. He phoned me on New Year’s Eve because he’d heard about Pat, and we chatted. I said if he ever wanted to work on something, we should. And then he sent me this track – Fast Car/Slow Traffic – to see if I could come up with a bassline for it.

Pat was having treatment in Israel because we couldn’t get what she needed here and I was flying back and forth between home and Tel Aviv. She was so happy me and Paul were working on something even though she had to put up with me humming basslines down the mobile phone. She never did hear the finished track though. It was a hard time, what with John going as well, but it has made me realise that whatever happens, it’s not the end of the world, life goes on. I didn’t really expect to get one track together with Paul, but I ended up on three – two on the album and a B-side.

The bass on Fast Car/Slow Traffic is vintage Foxton though – fast, fluid and tuneful, it wouldn’t sound out of place in a From The Jam set. What are the chances?

Yeah, we’ve only just got the friendship going again after 28 years, it would be another 28 before it happened again if I did that! It was actually very emotional going back to those [Jam] songs, but with renewed enthusiasm after a long lay off. There’s a bit on In the City that talks about most of the kids being under 25 – that made me wince a bit so we did it once or twice, but I don’t think we’ll go back to it.

Some of the songs are a bit naïve, some of the lyrics too, but generally they all stand up and we’re playing them with as much passion as ever before. I was with Paul the other day, and for the first time he asked a bit about the band, just chatting. I wouldn’t push it, but it’s good, it feels good. 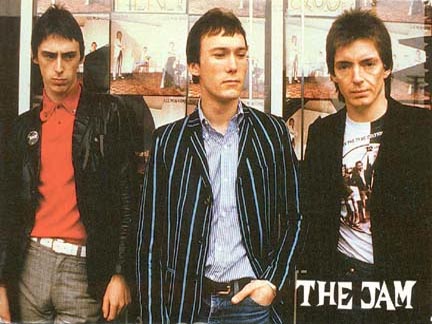 No, he has no wish to reform The Jam. He has no need to he’s deservedly very successful in his own right.

From The Jam has been incredibly well received from old fans and new ones alike, but it must be a hard job to please them all with the set list selection?

It is because there’s so many great tunes to chose from. I’ll come up with a set list then take it into rehearsal and we’ll go through it. Russell’s got to sing them so he’ll go through and say what he wants to do and so on. Personally, I think Smithers Jones needs a bit of a rest, but that and News of the World – which they use on Mock the Week now – always get great shout outs, so what do you do? Nice problem to have though.

A lot of the songs still sound very current – Paul’s been doing Jam songs for years now and they keep cropping up on movie soundtracks like Billy Elliot.

That was a great use of that song, it really kicked in, proper hairs on the back of the neck job. They used in The Matador, that Pierce Brosnan film, but I didn’t know that until I walked into the cinema with Pat and it started. They would have gone to Paul and I don’t suppose he thought he needed to call us up to tell us. At the end of the day, they’re great songs and they still stand up today. They’re the kind of songs that parents love to pass on to their kids – trust me, I know – because the band meant such a lot to so many of us.

The fans were always great, that is why the split was so hard to take. I thought like many of the fans that we still had somewhere to go, but what’s done is done. It’s why the first tour in 2007 sold out almost instantly. We had a review in The Guardian that said they’d seen grown me cry for all the right reasons. Some people have been a bit pessimistic about From the Jam, saying we’re like a tribute band, but how can you be a tribute to yourself? The Jam was always a three piece – and the fans always got that Paul was the writer, but we had our part to play as well.

Fans now turn up with their own kids and we get youngsters who have just found Paul Weller and are checking out what he used to be into as well. We were known for letting fans into the soundchecks and coming out to meet them after a show. Only a couple of times did it get really hairy – I remember in Liverpool once it went a bit Beatlemania with fans leaping on the coach and that, but we always saw ourselves as pretty ordinary blokes, not pop stars. Even today, we’ll stay around after shows and chat to people if they want us to.

What about originals – is there a place for them in From The Jam?

Yes, always has been. We put a new song into the set a while ago, Later Day that went over really well, got a very good reaction. So there are a couple of tunes knocking about that we might work up, but they’ve got a lot to live up to. We’ll be trying some new material, some originals that me and Russell have been working on. Our goal this year is to get an album ready to release in time for the winter tour. No matter what there will always be a good chunk of Jam songs in the set though and I keep hearing from old Jam fans saying the new songs we’ve been road testing sound like they imagined The Jam would have if they’d kept going. That’s some compliment.