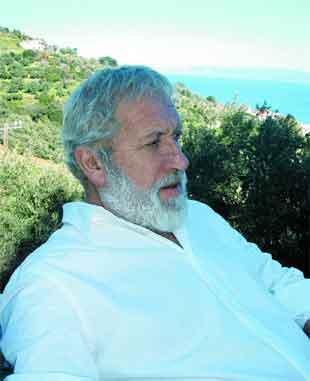 It’s nearly four years since Gordon Haskell posted a note on his website that said, “Gone fishing”, changed his pounds for euros and fled to a Greek island to find the peace and freedom his late-flowering fame had failed to deliver.

For more than 40 years he held success at bay because “it felt phoney” until, by a simple twist of fate he found himself number two in the singles chart at Christmas 2001 with How Wonderful You Are, still Radio 2’s most requested record ever.

It turned into a hoopla. Suddenly he was talking about marketing spends and recording advances instead of love and happiness. The conversations he thrived on in the bars across Europe that had sustained him during his lean years – “the jazz” as he calls it – had gone to be replaced by slimy deals with smarmy eels.

From time to time his spirits would rally and a fresh outbreak of optimism would fuel a new record, but the professional cynics had won and his heart really wasn’t in it.

Which he is why he went fishing … “Well I nicked the fishing off (old mate John) Le Carre, I was investigating, gathering information, observing without being seen – the secret of every good writer.”

Gordon’s measured tone is intact and his quick wit as sharp as ever. He sounds happy – he should be, he recently got engaged to partner Sue.

“I’m 65 next year and I can see clearer now than ever. That’s what moving here has done for me. I came here in order to see again what I love about England. I’ve been searching for the England of my childhood, and I can’t find it, and that’s sad. Anyway, it’s all in the record. There isn’t anything else to say.”

Ah yes, the record. Gordon has a new album called One Day Soon. He’s rightly proud of it and determined not to fall victim to the same power plays that blighted Harry’s Bar, the top 10 album from which How Wonderful You Are was taken.

“Last time I went along with everything and did what I was told, but this time I’m saying no from the outset. I won’t be a slave. The record is out there, people will find it by whatever means, as I very much doubt anyone will hear it immediately, because it probably won’t get played. But I believe it’s an important record that will stand in 10 years’ time and people will say, ‘You know what, he was right’.”

To recap – Gordon was born in Bournemouth in 1946 and by the mid-1960s was living the high life with the innermost of the in crowd in Swinging London, sharing a flat with Jimi Hendrix and playing in the Fleur de Lys, house band to the jet set.

Unhappy at the constant rip-offs, he jumped ship to embark on a solo career that was interrupted in 1970 when he reunited with Robert Fripp, his former bandmate from Bournemouth, in prog rock behemoth King Crimson.

He stayed for two albums, but found his love of simple songwriting was at odds with the Crimson tide.

Another solo record with Atlantic Records’ mainstay Arif Mardin followed and he backed the likes of Cliff Richard before washing up in Scandanavia in the mid-1980s, up to his ears in debt. His journey back is entertainingly told in his autobiography The Road to Harry’s Bar: 40 Years on the Potholed Path To Stardom, co-written with Reggie Perrin creator David Nobbs. One Day Soon updates anyone who’s interested.

“The big news is, I’m Greek! I’m Gordon Haskell Hionides. I was never an Englishman. I was always Greek, and that is the missing part of my identity that clears everything up.

“Life on Skopelos is perfection. It’s everything I was told life could be, but never was. It’s simple and free, people are warm and generous, you can create. There’s no crime – there’s only one policeman and he plays guitar!”

“I didn’t know about Greek culture, that’s the thing. The Greeks are a nation of philosophers and you see it here every day – they sit in the tavernas and drink and smoke and laugh and talk about politics because politics is life. The English are driven to wage war, which I’m not.

“I’ve never worked harder than I have in the past three years, learning to build my own house, tending to my fruit and vegetables, and still finding time to write an album, a book and a play. It’s just fabulous, so beautiful.”

And while Gordon will always stand by truth and beauty, he doesn’t shy from the ugly side of humanity.

“Out here we live where the Christian world meets the Muslim world, and we get news from both sides, which is very interesting. The people who run things – they and the banks – have made off with the takings and delivered their bill to the working man who is being forced to pay the price. The people here are closer to the land. You know, I used to say to people when I played the Thomas Tripp in Christchurch, ‘May you be blessed with goats’. It was a joke, but I didn’t know what I was saying. Out here I’m surrounded by goatherds!

“But they sleep in the afternoons and go to work at 5.30pm which means they miss telly, they miss all the rubbish we’re bombarded with, so they’re happy, more highly evolved, more in tune.”

For now though, Gordon is gearing up to get back in the water with the music industry sharks – and he’s none too happy about it.

“Getting ready to get back in that world again is not pleasant. The music industries have been the architects of their own doom, and now I’m asking for more. Anyway, I’m doing a few dates now and want to make a proper job of giving this record every chance so with word of mouth and the internet who knows? And I will be back to play the Thomas Tripp because I love (landlord) Johnny Lovell and the people there.”