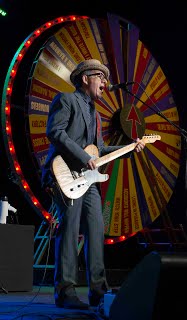 Having resurrected his Napoleon Dynamite persona to compere this most engaging and illuminating entertainment, Elvis Costello also laid to rest another nom de stage in emphatic style. Much is made of his way with a lyric, a melody, even his stagecraft, but his guitar playing is frequently overlooked. Well, no more, for it is these days a thing of majesty, awesome in directness, fleet of foot and deft of touch. No more can he hide behind the Little Hands of Concrete credit he took on King of America, it simply won’t wash any more.

And neither does any suggestion that Costello can be a prickly performer – three decades ago maybe, but not now. This was pure showmanship.

On stage at eight sharp, Elvis and the Imposters – the incomparable Steve Nieve (keys), the resolute Pete Thomas (drums) and the steadfast Davey Faragher (bass) – broke down the walls of heartache with an opening four song salvo of I Hope You’re Happy Now, Heart of the City, Mystery Dance and Radio Radio. Love and affection indeed!

Then came Napoleon, not in drag, but sporting a top hat and cane to introduce the Spectacular Spinning Songbook – it stood 150 feet high he was heard to claim later – on which were pasted various Costello highlights and mashed up mysteries (Imperial Ransom anyone?) from the last 35 years or so. Having already met Dixie de la Fontaine gyrating in the Hostage to Fortune Go Go Cage, he then thrust forward the fragrant Katya, sending her into the audience to corral spinners for the wheel. 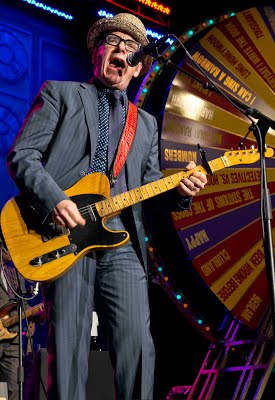 Each one resulted in a song or combination of songs for the Imposters to perform. Thus, it all began with a big hitter – Alison augmented (beautifully) by the sophisticated piano decoration of Mr Nieve – before proceeding through a selection that included Harry Worth, Please Please Me with a segue of No Dancing and a refrain from Be My Baby tagged on the end, a marathon medley comprising This Wheel’s On Fire, The River In Reverse, On Your Way Down and an impassioned I’ll Take Care Of You, before New Lace Sleeves gave way to an a bonus version of Green Shirt, in much the same way as the graceful Country Darkness prompted Elvis to treat us to a version of No Particular Place To Go.

The original, mid-80s version of the Spinning Songbook frequently descended into confusion, but the 21st century Costello is far too accomplished a host (and sober!) to allow that to happen. The Hammer of Songs, a strongman striker, threw up a suitably arresting suite – Everyday I Write the Book, (I Don’t Want To Go To) Chelsea, Beyond Belief, Waiting for the End of the World, You Belong To Me and Pump It Up – to bring an emphatic curtain down on the second wave of merry making. 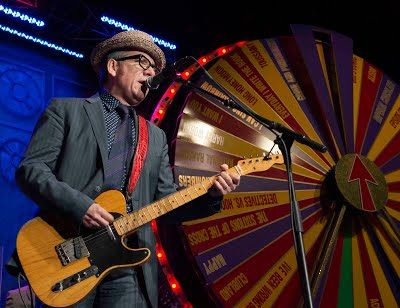 The third began with the return of Napoleon Dynamite, this time in gold jacket and tiger-striped hat, to serve up a brace of songs from 2010’s National Ranson album – Slow Drag With Josephine and Jimmie Standing in the Rain – that not only amply demonstrate Costello is just as supple a songwriter as he’s always been, but also reveal his voice to be in arguably the best condition of his entire career.

The vicious, angry, bitter, Tory-baiting Tramp the Dirt Down saw the Imposters back on stage and gave way to National Ransom’s burning title track and a final farewell combo of Oliver’s Army, Shipbuilding and a genuinely anthemic (What’s So Funny ’Bout) Peace, Love & Understanding.

The last time he passed this way, accompanied only by Steve Nieve in April 2004, Costello was in comfortably restrained mood, happy enough, affable and absorbing, but he seemed to be treading water.

That Elvis is back in the building with such force and verve should be a source of much joy and happiness. Whatever next?