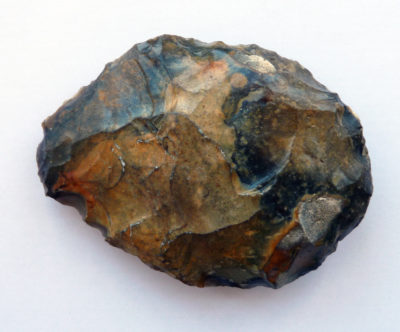 This flint handaxe is one of the earliest known tools ever made by our evolutionary forebears – and it turned up on Swanage Beach, found there recently by a passer-by close to the Mowlem Theatre. It was handed in anonymously to Swanage Museum, where it is now on display.

Local enthusiasts suspected it could be a flint handaxe of between 400,000 and 500,000 years old, made by Homo heidelbergensis, an extinct species of the Homo genus that predates Homo sapiens by at least 200,000 years. It would have been used primarily as a butchery tool and one edge of its tip has been finished with two tranchet (or slice) blows, one on each face, to create a cutting edge that can be re-sharpened to extend the life of the tool.

In search of answers, archaeologists Dr Martin Green and Dr John McNabb of the University of Southampton were approached. Both agreed it probably dates from the Lower Palaeolithic era (between 300,000 and 3.3 million years ago), although in a further mystery, how it turned up on Swanage beach puzzled them both.

‘It is the sort of handaxe that would easily fit with the assemblages excavated at Boxgrove in Sussex which have been dated to c. 4-500,000 BP [Before Present]…,’ wrote Dr Green, ‘ but as a beach find I am a little surprised at the condition of the handaxe [in that] it shows little or no signs of “rolling”. This is abrasion of the edges and ridges caused by wave action on beaches, which can sometimes be very marked.

‘I am a little wary as to whether it might have been accidentally imported. I know that there has been a lot of dredging and beach enhancement works in the Bournemouth/Poole area, which has included gravel dredged from the sea off the Isle of Wight and deposited on beaches in Bournemouth. There has also been lots of dredging in Poole Harbour with the material similarly deposited.’

Dr McNabb concurs: ‘Usually these artefacts fall out of cliffs capped by ancient river terrace graves in which they occur, or are washed up on the beach having been eroded out of now submerged Pleistocene [Ice Age] terrace deposits. Its discovery on a beach is very puzzling.’

Dr Nick Ashton, Senior Curator in Palaeolithic Archaeology at the British Museum, accepts the plausibility of the beach replenishment theory. The museum collection includes the Dewey handaxe found on the ‘north-east end of Swanage Bay’ in 1930. It shows clear signs of ‘rolling’ damage by the sea and the flint has been severely stained by river deposits, unlike the new find.

But perhaps its true value lies in what we can never know. Swanage artist Brian Graham draws deeply on the prehistoric in his work and marvels at the creativity involved in making such an effective tool with the material the ancients had to hand. He says: ‘When you see something like that, or hold it, I find it impossible not to wonder whether our forebears contemplated shape and colour and texture, how they solved problems and how they expressed themselves.’

It certainly makes you think….