Nick Churchill > Features > Renovating Corfe Castle – what might have been 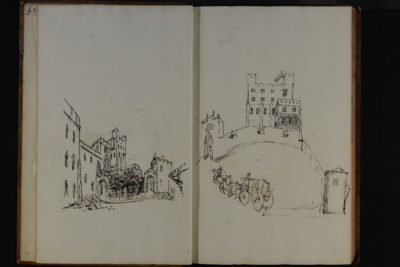 It is one of Dorset’s most familiar beauty spots, instant visual shorthand for the Isle of Purbeck. It has been photographed, painted and sketched from every conceivable angle – it even appears on the opening credits of the Disney film, Bedknobs and Broomsticks. Last year a computer animation student digitally restored Corfe Castle, but had one of its previous owners had his way, that most familiar of ruins might have looked very different indeed.

Besieged during the Civil War, Corfe Castle was slighted by order of Parliament in 1645, resulting in the ruins more or less as we see them today. Following the Restoration in 1660, the Bankes family regained its lands and developed a new family home at Kingston Lacy, but some 160 years later, William John Bankes evidently took a break from planning the re-design of the current family seat to turn his not inconsiderable artistic attentions to the old one.

‘We can only speculate, of course, but it seems that having done much of his travelling in Europe, Egypt and the Middle East and amassed an extensive collection of art, William John Bankes was essentially waiting for his father to pass away so he could carry out his plans for Kingston Lacy,’ says Luke Dady, Archives Services Officer at Dorset History Centre. ‘We know from his diaries and letters that he was frustrated that his father didn’t see eye to eye with him on what he planned to do at Kingston Lacy, so perhaps he started thinking about what he could do to Corfe Castle.’

William John had to wait until 1835 to get his hands on Kingston Lacy, which he transformed, encasing the brick structure in stone and remodelling the inside to show off his highly prized art and antiquities. But in 1841, following an indiscretion with a soldier, he fled the country, leaving us to wonder whether Corfe Castle was next on his to-do list.

The leather-bound volume, which still bears its price tag – a princely £1 12s 6d – contains a variety of drawings, sketches and architectural details together with extensive notes. There are also ten double-sided pages of a Parliamentary speech against Catholic relief (Bankes was MP for Cambridge University from 1822 to 1826) and at the back of the book a series of lists detailing the furniture and furnishings which he had picked out – often from specific dealers, with prices – and with which he intended to fill the renovated castle.

It seems he had in mind a recurrent theme of falcons, hawks and greyhounds: perhaps a nod to William the Conqueror’s fondness for hunting in Purbeck’s royal forest following the upgrading of Corfe’s defences after 1066. In one drawing, a coach and four of the day is shown sweeping across the entrance bridge towards the gatehouse. Above is the ruined keep next to an ornate and imposing contemporary building with large windows. In another sketch a tiny archer is seen on the restored battlements. Other drawings show quite detailed architectural ideas for windows, architraves and reliefs. 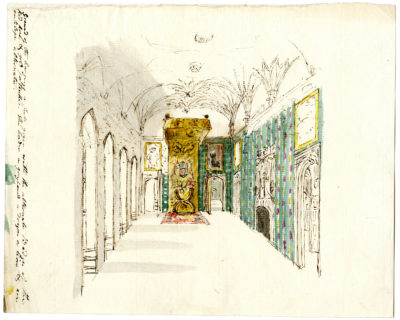 ‘I think some of the drawings are William John’s ideas of how the castle used to look,’ says Luke Dady, ‘but many of the sketches are clearly ideas for how he wanted the castle to look if it was brought back to life, as it were. The amazing thing is how believable they look to the modern eye. It’s very easy to see how the Corfe Castle he imagined could have been a 21st-century luxury retreat hotel, for instance.’

It was perhaps the last time such a restoration project could have been contemplated and had William John Bankes been able to oversee the completion of Kingston Lacy in person, perhaps it might have afforded him the time to begin work at Corfe. As it was, he wrote letters and instructions to his brother George and widowed sister Anne, who enacted them as best they could. After his death in 1855, there followed a period of consolidation for the Bankes family in which there is no sign of any appetite for great works on the family properties. By the late 19th century, the ruins of Corfe Castle were fast becoming established as a tourist attraction, even more so after the coming of the railway in 1885.

The volume has come to light as part of Dorset History Centre’s Bankes Archive Project to catalogue and conserve some 25,000 documents, drawings and photographs and make them freely accessible to the general public. The archive remains the property of the National Trust, to which the Bankes estate was bequeathed in 1981, its largest ever single donation, but the drawings present a glimpse not only of what might have been, but also into the motivations of a man whose presence is still felt throughout the estate.

‘I don’t think he was after recognition,’ suggests Luke. ‘To me these are the drawings not of a man seeking fame or fortune, but of a man trying to show off his architectural skills. We know he read extensively and studied drawing and there are a lot of perspective drawings, as if he was trying to teach himself the skills of an architect. Similarly, his shopping lists are not simply wish lists. We know from his letters regarding the work on Kingston Lacy that he could be quite frugal. He would send instructions on how much to pay for certain items and I think the prices attached to the lists in this volume indicate how much he would be prepared to pay, not necessarily what those items cost. He’s obviously got a full picture in his mind of what he wanted Corfe Castle to look like – these are not broad strokes but fine details of plates, dishes, furnishings etc.’

Among the loose papers contained in the volume are several floor plans that archivists believe may relate more to how the castle used to look than what Bankes wanted to do with the new build. Some of the pieces of paper are no more than torn strips of paper with a few sentences or Latin phrases jotted down in tiny, delicate handwriting; others carry drawings of ornate architectural details and there are even some beautifully painted romantic watercolours of nameless bucolic scenes. The names Clara Peach, Emma Peach and Ellin Peach appear on the back of some paintings; Nathaniel William Peach, from Hyde, was MP for Corfe Castle from 1828 to 1829, commended by Henry Bankes, William John’s father. Peach joined the likes of the Duke of Wellington to give evidence in respect of William John Bankes’s character in Bankes’s first trial for indecency in 1833, after which he was acquitted and retired from public life

Yet more drawings show apparently idealised views of Corfe Castle, almost as if for a brochure. The castle seems to be depicted post-renovation, but set in a landscape slightly removed from the one that actually exists. ‘He’d done some travelling by this stage of his life, so he knew enough to realise it was simpler to carry loose paper with him when he was on the road and I suspect he brought these drawings back and pressed them in the book to keep them flat,’ says Luke. ‘But all the loose papers and tiny notes suggest he was collecting thoughts and images and ideas the whole time. He seems quite a restless person.’

The book itself is not much to look at, quite tatty and torn and infinitely more shabby than chic. There was once a plate on its front binding and some pages have been removed from the front. There’s some illegible writing on the spine. It arrived at the Dorset History Centre contained in a box – one of around 850 such boxes that came from Kingston Lacy, where they had been stored. Their contents tell much of the story of the Bankes family from its arrival in Dorset until the handover to the National Trust and this most tantalising of volumes was contained in a box of other sketchbooks, artworks and loose papers.

‘There’s nothing remarkable about the outside and although I recognised it as the work of William John Bankes, even when I started flicking through it, I thought it was just his interpretation of what Corfe Castle had looked like,’ says Luke, who re-discovered the book in January. ‘It wasn’t until I saw the drawings of the ruins with the glass-fronted building beside that I realised what I was looking at, then the closer I looked at the content, the more I understood its meaning. Things like this are what make this job so special. To be honest, it still takes my breath away now.’

To view the catalogue or make an appointment to see documents from the Bankes Archive, visit: https://dcc.dorsetforyou.gov.uk/bankes-archive/