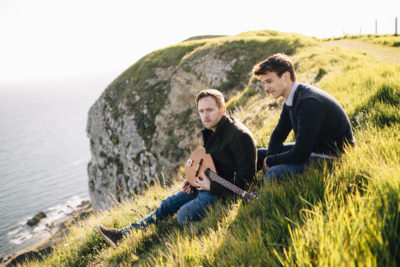 Firm friends since meeting at school in Poole some twenty years ago, they have grown up together, moved away to study apart and come back to Dorset in order to reach out to the world. Now with an emerging talent Horizon Award nomination at this year’s BBC Radio 2 Folk Awards, Ninebarrow – Jon Whitley and Jay LaBouchardiere – are well on their way. Even though their ultimate destination remains obscure, with one thing leading to another very nicely thus far, when they say they want to take it as far as it goes, that could end up being quite a journey.

In January they both gave notice to quit salaried career jobs – Jon as a primary school teacher, Jay as a GP – in order to pursue musical ambitions that have already seen them rack up a slew of awards and accolades from the Larmer Tree Festival Breakthrough Award in 2013 and Dorset-based Fatea magazine website’s Best Duo crown in 2015, to four-star album reviews in the Daily Telegraph and R2 magazine and five-star notices in Maverick and English Dance and Song (the English Folk Dance & Song Society magazine) for last year’s Releasing the Leaves.

As in its predecessor, 2014’s While the Blackthorn Burns, their home county looms large in that album with Dorset stories, places, folklore and landscapes informing richly evocative original material. While inventive new readings of traditional songs are more a sound of Dorset than a specific ‘Dorset sound’ Ninebarrow’s music is steeped in the wider English folk music tradition captured in the songs and dances collected from the West Country by Edwardian pioneers such as Cecil Sharp and the Hammond brothers.

‘Dorset is a huge part of what we do,’ says Jon. ‘It influences our own songs although we’re not singing specific Dorset songs or performing in a Dorset style. I’m not sure there even is one. The Celtic folk tradition is well established and it’s much closer to the everyday lives of many Scottish, Irish and Welsh communities than perhaps the English tradition is to ours. We did think about not wanting to be identified as a regional band, but every time anyone writes about us, it’s always as a Dorset-based duo, so we’re more relaxed about it now. I can’t imagine doing this from anywhere other than home – I’m very happy if a tour ends with a long drive that takes us back to Dorset.’

Ninebarrow spend a lot of time on the road, playing shows in arts centres, folk clubs, village halls, churches and festival fields. They have also embraced American-style house gigs in which they perform at someone’s house or private party. Fame and fortune have never been much of a motivation, but paying the bills and getting better at what they do have been. Until a few months ago, they combined busy professional lives with making music when they could. Rehearsals were often late-night affairs, songs arrived out of the ether and were worked on in spare moments, and recording happened when time and budget were available.

‘Now, though, we can have a whole day to work on a single song if it needs it,’ says Jay. ‘It’s amazing! Financial solvency is our aim and everything is worked out based on the worst-case scenario, but we’re finding we’re ahead and next year’s diary is filling up already. If anything I’m the cautious one and although I wasn’t pushed into giving up the day job – I still do a bit of locum work – there was some persuasion.’

Jon smiles without comment. Upstairs in the pair’s Broadstone house is the Ninebarrow nerve centre where he takes care of the admin: taking bookings, marketing, making sure everything is in place. It is a job that has got measurably bigger since the Radio 2 Folk Awards nomination – ‘No win for us but we had a great night out with our families at the Royal Albert Hall’ – which is why they will be working with not only a producer on the next album (recording starts in September), but also a publicist. 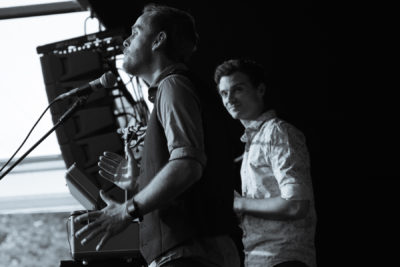 ‘On one hand we have to let go of some level of control, but on the other it is completely liberating to be free of some of those things so we can concentrate on the playing and the singing and developing musically. We’ll still have unaccompanied songs on the next album and songs with just our voices and one instrument, but we want to do something more orchestral with the string arrangements.’

For as long as he can remember, folk music has been a part of Jon’s life. His dad, Bob, is a respected singer-songwriter in his own right and used to host regular singarounds at the family home on Canford Heath, which was where Jay came to love the music. Ironically, although both families have always been hugely supportive of Ninebarrow’s musical career, when it came to giving up the day jobs, it was Bob who was most vocal in expressing his concern. ‘What he actually said was that we must be crazy and that nobody makes a living out of folk music these days,’ laughs Jon. ‘He’s come round now, of course, and both our families are right behind us. The plan is to keep booking shows, fill up the diary and use the time we have to make the music the best it can be.’

Jay nods enthusiastically, echoing Jon’s appreciation of the additional time they can now spend consolidating and building on what has been by any standard pretty rapid progress. ‘When we used to dream about what we could do with Ninebarrow, a Radio 2 Folk Award nomination was something we aspired to at some far-off point, so to get there in the first six months of turning professional is mind-blowing.’

But what about the men at the heart of it all, what about Jon and Jay – do they still get on? Is Ninebarrow a band of brothers or a benevolent dictatorship? ‘Of course there are moments of tension, an argument or two, but that’s all part of the creative process,’ reasons Jay.

‘The big difference now,’ suggests Jon, ‘is that those disputes happen at eleven in the morning, not eleven at night when the fuse length is considerably different. I don’t know – Jay, would you say I am a benevolent dictator?’ he asks.

‘Not so sure about the word “benevolent”…’ comes the riposte, swiftly retracted amid bursts of laughter and knowing looks.