Nick Churchill > Features > Parnham, so much more than furniture

On 15 April 2017 a fire destroyed the fabric of Parnham House to write a devastating new chapter in the chequered history of one of Dorset’s oldest stately homes. It was an ugly, inhuman, destructive blow to the 500-year-old house, particularly as its recent history had been anything but.

This month marks 40 years since the School for Craftsmen in Wood – later Parnham College – opened its doors having been set up by celebrated furniture maker John Makepeace and his wife Jennie who, only the year before, had sold everything they owned in order to rescue the previously abandoned Elizabethan manor house that had also been considered by The Rolling Stones for a recording studio and by the Liberal Party as a regional HQ.

The subsequent success of Parnham far exceeded any expectations and it became an educational phenomenon that turned the teaching of creative arts, in particular design, on its head setting new standards that have today become accepted practice.

‘Any ambitions I had for Parnham were fairly modest,’ recalls John. ‘It frustrated me that the educational system separated out the practical, the creative and anything to do with business, which to me seemed to be anti-entrepreneurial. Entrepreneurs need a variety of skills in order to get going even if they subsequently employ experts in certain fields, so the intention at Parnham was to give students everything they needed to start out in business.’

A new book Beyond Parnham, published this month, celebrates the work and legacy of Parnham College, chronicling its 25-year history and examining the continuing spirit of what was achieved there through the work of its illustrious alumni, among them internationally renowned designers such as Konstantin Gric, David Linley, Sean Sutcliffe, Juliane Trummer, Wales & Wales, Jake Phipps and Verena Wriedt.

‘I was only vaguely aware of the impending anniversary until a year or so ago when a former student contacted me and suggested there should be some sort of reunion. Well, that can be a terribly tricky thing to pull off as someone might have been missed, but we did it and had this most amazing gathering at the new Design Museum – people came from all over the world. 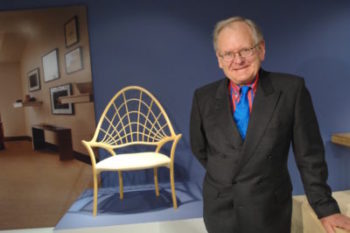 ‘There was some incredible talent in that room including several people whose work is on show at the Design Museum. I must confess I’m something of an emotional person in any case, but it was quite overwhelming to take a moment and consider all these people had graduated from Parnham.’

It’s a point that is reinforced with great eloquence in the book as former students share their stories of Parnham and examine their (in many cases glittering) careers. Their evident affection for Parnham is further echoed in the reminiscences of the teaching and support staff whose stories are given equal prominence.

‘Reading the book it struck me that, regardless of anything to do with design or furniture making, anyone with an interest in human nature will find it very revealing,’ suggests John.

‘Here we have an extraordinary group of people looking back on their formative years and subsequent careers – it’s not often one comes across something like that.

‘I never saw my role at Parnham as teaching – it was my job to bring together the location, the students, the tutors and the support staff and invite guests who would help prepare those who had the commitment to be there to go on to make their living.’

Life at Parnham has been described more than once as ‘monastic’ and the rigorous timetable for the intensive two-year course set 8 o’clock starts in the workshops and evening classes three days a week. Annual fees for the 11 or so students in each intake were £3000 at the outset and, of course, attendance was residential.

‘The fees rose considerably due to the inflation of the times, but we offered many bursaries and some scholarships to ensure that shouldn’t be a barrier to talent. Parnham didn’t feel particularly rarefied from our side of the fence although someone teaching in the state system might well have seen it that way, which is why I’m pleased to see the ideas we worked with have an influence today. 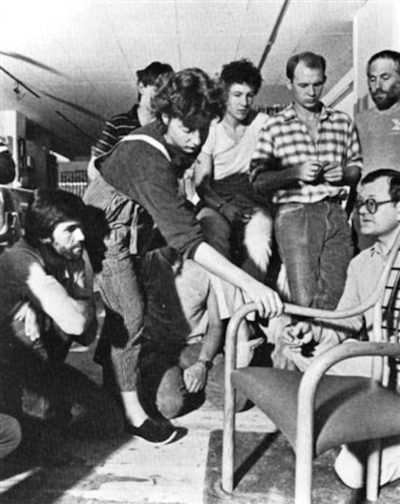 ‘I’m not sure there was anything inherently special about Parnham as a location, although it may have helped sway a few parents, but I think far more parents – and certainly the students – were convinced by our objectives.’

Those intentions were well received from the outset as government approval was secured for the change of use of a Grade I Listed historic building and Lord Reilly, Director of the Design Council, Sir Peter Hall, Director of the National Theatre, and Yehudi Menuhin, became patrons. The Duke of Edinburgh visited in the first year and Roy Strong wrote about Parnham in Vogue with photographs by Lord Snowdon. 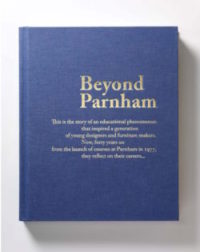 Eminent educationalist Sir Christopher Frayling, a Parnham guest lecturer and now Chancellor of Arts University Bournemouth of which John Makepeace is an honorary fellow, notes in this foreword to Beyond Parnham, it was a place ‘where the hand, the head and the heart could be brought together through the making and designing of craft furniture.’

As the story of Parnham unfolds in the following pages the affection and admiration with which the college is remembered spills from the pages of the book, making the catastrophic events of 15 April all the more painful for anyone connected to it.

‘Self defence has long since taught me not to become overwrought by things I’m unable to control,’ says John. ‘People loved the place and we had so many messages expressing shock and sorrow after the fire it was incredibly touching. We are so very lucky to have had Parnham in that extraordinary time that we did. It is a terrible loss to the community and it is quite rightly being mourned.’ 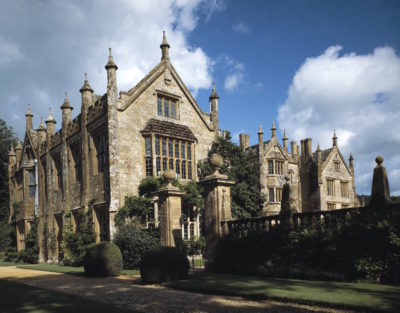 The first house on the site was built for the Gerard family in the 1400s and rebuilt in 1552 for Sir Robert Strode after it passed into his family’s hands during the reign of Henry VI and remained its seat for more than 200 years. During the Civil War Sir John Strode’s widow Lady Ann was killed defending it from Parliamentarian troops under Fairfax.

Regency architect John Nash enlarged the house in 1810 for William Oglander, but retained the 16th century hall and kitchen wing. It was the family home of William Barnard Rhodes-Moorhouse, the first airman to be awarded the Victoria Cross and after his death at Ypres in 1915 he was buried in the grounds, as was his son, also a pilot, who was killed in the Battle of Britain. Having been run as a country club in the 1920s it was requisitioned for the US Army in Word War 2 and acquired by the Mental Health Association in 1954.

John Makepeace bought Parnham in 1976 and sold it 25 years later to hedge fund manager Michael Treichl whose extensive £10 million restoration programme was widely admired. Following the catastrophic fire Michael Treichl was arrested and released on police bail before being found dead in the waters of Lake Geneva on 16 June.