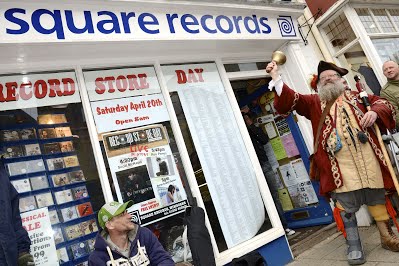 I can’t remember the last time I was out and about in Wimborne at seven in the morning… but Martin, Mark, Colin and most of the folks outside Square Records on Record Store Day can – it was this time last year. And before that it was the previous year.

These are die-hard music fans and record collectors. Passionate, determined and only too happy to endure all manner of discomfort – or a night on the streets of Wimborne at least – in order to capture their quarry… a one-day only release by their favourite artist.

They’re not fast buck merchants hoping to snaffle a rarity they can flog on eBay, they’re not even that disappointed if someone ahead of them gets the last copy of a single or album they had in their sights – as long as it has gone to someone who will love it.

“That would be completely against the spirit of Record Store Day, I’m here to buy, I never sell,” says Martin Noble, 50, from Blandford.

“Spoken like a true collector,” someone quips over his shoulder.

Martin arrived at Square Records at 10am the day before. Square opened at 8am on April 20, Record Store Day, by which time Martin had spent 22 hours there. He did the same last year and will do the same again next year. What’s more, so too will dozens of others – there’s more than a hundred souls outside the shop by the time it opens.

And what did he want?

Rabbit by Chas & Dave on a rabbit-shaped picture disc…!

“Well, that and some David Bowie stuff,” says Martin, who’s been collecting records since he was five years old. “There’s a load of us know each other from previous years, this is the fourth year of Record Store Day and it’s a great thing because it gets people away from their computers and out to support local independent businesses in their local towns.”

This year there were more than 500 exclusive records released for the event, from artists including David Bowie – a picture disc, a 1960s reissue and material from his recent album The Next Day on white vinyl – and Pink Floyd (a pink vinyl pressing of their 1967 single See Emily Play with original Syd Barrett artwork). 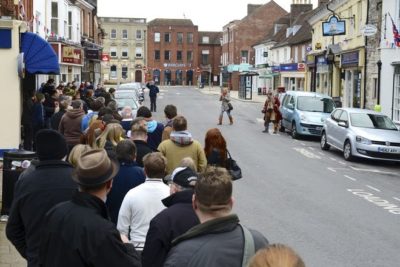 The queue outside has that very British sense of disorder about it. People drift in and out, they nip round the corner to the public toilets, across the road for a pint, or a coffee in the morning. With opening time approaching the queue has become more metaphorical than actual, but as town crier Chris Brown announces the shop opening at 8am and requests the first six in the queue for advanced entry, any usurpers quickly relinquish their space and the all-night brigade is admitted.

“This is so well organised here,” says Colin Brooks, 29, from Poole – number two in the queue (pictured below left with Chris Brown and first in the queue Martin).

“They give us all numbered sheets and we select our choices then we go up to the counter in order. The stock is very limited so you have to get here early if you don’t want to miss out.”

Like Martin, Colin is hoping for a Chas & Dave picture disc, but he’s also after some dance remixes. At 29 he’s much younger than many in the queue.

“I grew up on CDs, but I’m really into drum & bass and a lot of the remixes used to come out on vinyl, which is how I came to fall in love with it. There’s a great feeling here, it’s a real event.”

Colin’s point about the Square’s well-oiled operation is soon illustrated. With the first few customers served the door is fully opened and the queue keeps a kind of shape, even though many of its constituents wonder off to browse the shelves, chat to one another, all the time swapping stories and wish lists. When their name and number is called they go to pick up their goods.

All except Nathan and Ollie that is. Nathan was desperate for some Bowie earlier, but he’s wandered off and even though they’re holding the queue, they can’t wait forever. His name is shouted down the line, but he’s nowhere to be seen. Time’s up and they’re on to the next one.

Business is the very definition of brisk – one customer leaves the counter carrying a whole box of goodies before him – the best part of 400 quid’s worth. Have you got enough?

“I think you’ll find you can never have enough,” he deadpans, much to the mirth of those assembled.

“This has been the best Record Store Day yet,” says Square Records’ Paul Holman. “In the past the labels have seen it as a bit of a pain, they couldn’t understand the value in pressing expensive limited editions of vinyl releases. But this year they’ve got the mix of releases just right – material that hasn’t been available before, special editions of some classics, coloured vinyls.

“It’s a good day for us with live music in the shop in the afternoon and the busking festival around the town. Our loyal customers love the day and it’s good to see new people as well. Hopefully, once they’ve been they’ll keep coming back.” 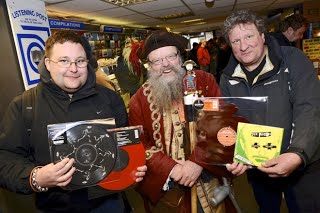 evin Hart and his 14-year-old son Taylor came down from Northampton to see teenage R&B outfit The Strypes in Bournemouth a couple of days before and decided to stick around to visit Square Records on Record Store Day. They joined the queue at 4.30am.

“We went to our local shop last year and there was a stampede, everyone was pushing and shoving to get stuff off the shelves,” says Kevin. “I heard of one shop that was auctioning releases to the highest bidder so they could make more money – terrible. I looked into it and this operation has got a really good name.”

They fancy a trip back next year. If they do make the journey they can be sure of meeting Martin and the others again. So, was it worth all night on the pavement?

“Of course it was,” yawns Martin. “I’ve got exactly what I wanted and I’ll be here next year – hopefully for a Snooker Loopy cue-shaped picture disc!”