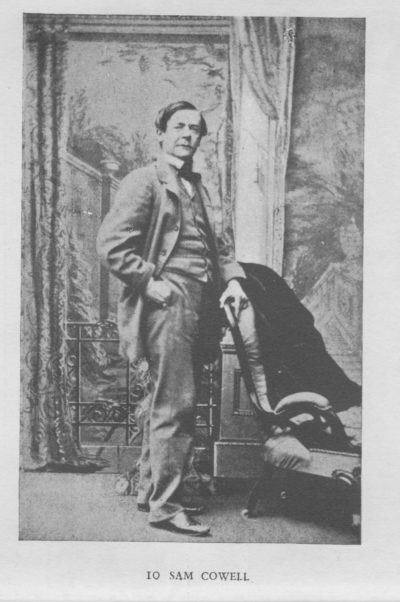 He was the highest-paid singing star of his day with songs known the world over; he performed for Queen Victoria and is credited with creating a new era in popular entertainment, yet when Sam Cowell died in Blandford Forum at the age of 45, he was broken and penniless.

The first star of Music Hall, that most peculiarly British theatrical tradition which amused audiences of all classes from the 1830s until it morphed into light entertainment with the advent of television, Sam Cowell found fame as a comic singer. His best-known song, ‘The rat-catcher’s daughter’, was a feel-good broadside ballad of working class triumph over adversity that sold prolifically as a song sheet. Further cockney character songs such as ‘’Villikins and his Dinah’ and ‘Billy Barlow’ – so popular that the name was adopted by an English actress, an Australian comedian and an American minstrel – confirmed his celebrity, but he also burlesqued serious dramas, including Macbeth, and delivered a version of Hamlet in doggerel.

Born in London in 1820 the son of an actor, he grew up in the United States and made his stage debut at the age of nine in Thomas Knight’s musical, The Turnpike Gate. As a child he was billed as ‘The Young American Roscius’, after the famous Roman actor, before returning to Britain at the age of 20 to work for his uncle who managed the Theatre Royal in Edinburgh. Although he appeared as a serious actor and singer, he also discovered a talent for entertaining audiences between the acts as a comic songster. He moved to London in 1844 with his wife, Emilie, and young family and, after abandoning a three-year contract with noted actor-manager Benjamin Webster, went on to perform at various theatres, including Covent Garden. He was rewarded with even greater fame after ditching straight roles to specialise in character singing in the pub saloon theatres and supper clubs that had sprung up to offer more salubrious versions of the ‘free and easy’ amateur nights popular in the taverns.

At Evans’s Song and Supper Rooms in Covent Garden, where Charles Dickens was a regular visitor, singers were typically paid £1 a week with free drink, but a change in the law forced the owners to choose between becoming theatres, which were regulated by the Lord Chamberlain and banned smoking and drinking, or establishments legislated by the local authority where smoking and drinking were allowed but plays without music were not.

The most important of these early music halls was the Canterbury behind a pub in Lambeth where Cowell, having progressed from Evans’s and similar venues like the Coal Hole and the Cyder Cellars, was paid up to £80 a week to sing twice a night. He also starred at the Grecian Saloon, where future music hall legend Marie Lloyd’s father was a waiter, featured in the pantomime writer E L Blanchard’s Nobody In London, sending up the excitement surrounding the Great Exhibition of 1851, and twice appeared in court theatricals for Queen Victoria at Windsor.

For three years, from 1857 to 1859, Cowell went on the road, performing nearly every night in a punishing schedule that cemented his reputation as the country’s most popular singer. It also made him hungry for more fame and greater wealth and in November 1859, accompanied by his wife, Emilie, and oldest daughter, Sidney, he began a two-year tour of the United States where his appetite for drink – another by-product of life on the road – got the better of him.

Within six months Emilie was writing in her diary: ‘Oh, England, that we three were once more on thy hospitable shores and had said farewell forever to this upstart country.’ She went on to chart her husband’s decline, both physical and fiscal, as his fortunes faltered on- and off-stage. He returned to London in 1861 to great acclaim at the Canterbury, but the damage to his health had taken its toll and he developed consumption. 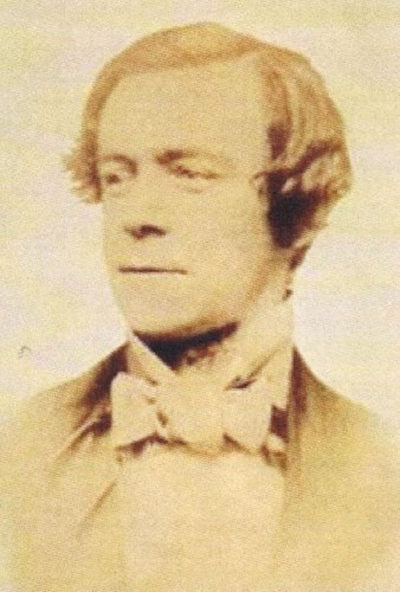 Writing in the Dictionary of National Biography, literary editor and artist, Joseph Woodfall Ebsworth said of Cowell that he was ‘always of singularly amiable disposition, devoid of jealousy or malice, and of domestic habits, although with such genial sociality that his company was sought and welcomed everywhere, he was invited to Blandford in Dorsetshire, to recruit his health if possible, by his friend, Mr Robert Eyers of the Crown Hotel.’

An unattributed contemporary account of Cowell’s time at the Crown is published in Winkles and Champagne, M Willson Disher’s illuminating 1938 treatise on the heyday of Music Hall. ‘The waiter and chambermaids regarded him with curiosity: the stablemen talked of him over their beer: his arrival made more or less sensation throughout the town. He was very ill, grew worse and worse; consumed a bottle of brandy per diem, when he could get it, and was somewhat noisy. At length the Crown’s hospitality being worn out, though not his host’s kindness, a lodging was taken in the town and the sick man’s wife brought from London.’

Sam Cowell died on 11 March 1864 with Emilie and his family and the rector, Rev. J R Quirk, at his side and was laid to rest in Blandford Cemetery four days later.

‘Few comedians have been better loved, or, on the whole, passed through life so successfully,’ wrote Ebsworth. ‘Collections of “Sam Cowell’s Songs”, and photographic portraits of him in character, used to be enormously numerous, and popular. Wherever he went he was loved and by all who had known him he was mourned. His only fault was improvidence.’ 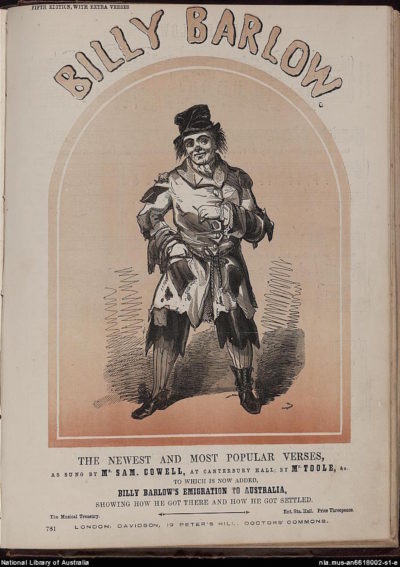 A little less charitably, in his obituary of Cowell, E L Blanchard wrote: ‘He bore the reputation of being the originator of Music Halls, and certainly first drew attention to the Canterbury, where he was a great favourite. He was afterwards, for a long time, at Evans’s, where he made large sums. He had been a bankrupt, and died in distress, leaving his family totally unprovided for.’

Three months after his death, Sam’s friends, led by Sims Reeves, the foremost operatic tenor of the day who sang ‘Come into the garden, Maud’, and John Lawrence Toole, who intoned ‘An ’orrible tale’, staged a benefit concert to raise money for his family and see that a headstone was erected on his grave. A century and a half later, it provides at least some clue as to the stellar career of the man it commemorates: ‘Here lies all that is mortal of Sam Cowell’ with a Biblical quotation from Hebrews 7:25.

We can only wonder what he would have made of his showbiz namesake from our own time.

Wherefore he is able also to save them to the uttermost that come unto God by him, seeing he ever liveth to make intercession for them.