Nick Churchill > Interviews > The pluck of the draw 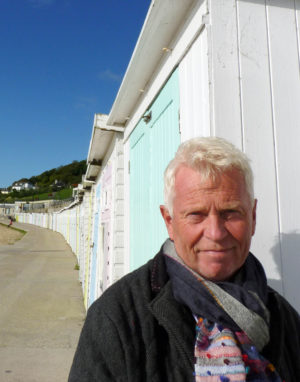 Despite spectacular views from his elevated studio across Lyme Regis, the beauty of the real world provides precious little inspiration for the weekly cartoons Ian Dicks draws in short order for the Financial Times. Every Friday he’s given little more than two hours to draw a cartoon that illustrates a comment piece on some aspect of the global financial landscape.

‘It’s pretty dry stuff, I can tell you,’ explains the naturally chirpy Ian. ‘It’s not so bad if the brief is delivered on time, but it’s usually late. I need complete silence to come up with ideas – I usually submit two and then once I get the go-ahead, I draw the preferred option and deliver it.

‘Fortunately I’m pretty good with ideas. I see the cartoons a bit like maths. The brief arrives like a sum to be solved and the cartoon is the solution. The trouble is, I’ll get into a way of thinking then a lawn mower will start up, or the phone rings, but the one thing I never do is panic. The moment you panic about not having an idea you’re lost.

‘But to get back to the point, the world outside the window, Dorset, has very little impact on what I put on paper. I wish it did. I’ve recently started to paint again and maybe it’s because I like design, but I have a pretty good eye for proportion, I’m just hopeless at getting the picture on paper. Some say I’m too harsh on myself but nobody’s going to see anything I paint until I’m completely happy with it myself – I’m not comfortable with the private view, it’s anathema to me.’

To chat over coffee with Ian is to natter a way around the houses and back again – an anecdote here, an observation there. He was born in Weymouth and boarded at the Woodroffe School in Lyme – ‘I had four sisters and it was thought it would toughen me up. It didn’t.’ – before taking a graphic design degree at art college. Ian goes on to share horror stories from his days as a fully paid-up original 1980s Docklands-dwelling ‘yuppie’ with a job in a swanky advertising agency to boot. ‘It was all an accident, really,’ he recalls. ‘We had tea at someone’s flat one day and met a developer who was raising finance for the first major residential development in Docklands.

He had this Utopian idea of a community of creative people, and we thought we’d have some of that and signed up. Within months, though, the conversations changed from ‘What are you drawing?’ to ‘How much is your flat worth?’ and we moved out. 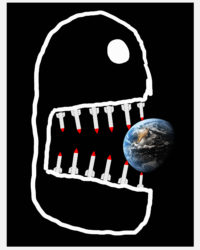 ‘I liked advertising because it was buzzy and quick, but really I just wanted to do good work and the agency world at that time was brutal. I suspect I would have gone a lot further if I’d spent more time in the pub, but it wasn’t to be.’

A move to Bath followed that lasted as long as he could stand the rising traffic pollution that eventually drove him out of a four-storey city centre town house twenty years ago. As ever, there was a silver lining – the yuppie years financed his pursuit of a career in the creative arts, and leaving Bath in search of cleaner air brought him to the rambling former funeral parlour and one-time guest house for ladies that Ian and his wife, children’s book illustrator Margaret Chamberlain, now call home.

‘We love it here,’ Ian confides. ‘We had it all done at once based on the thinking that this might be as good as it gets. As things turned out, it was. So not only is it a lovely home, but we have all those intangible things in Lyme as well – we know people, we feel at home. 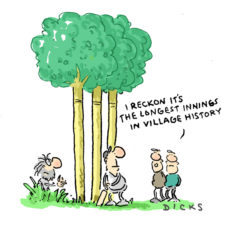 ‘We’ve tried all sorts of things since we came here. I ran a t-shirt business for a while from the studio. I got very interested in the t-shirt as a method of communication and, like a cartoon, it’s quite immediate, so I could have an idea and then half an hour later it was on the pegs. It did quite well for a while – then we decided to go to Glastonbury. I printed up 3000 t-shirts and had the capacity to make more at a friend’s holiday home nearby. We made a stand, got a van, had people to sell the t-shirts, everything was in hand except the weather. It was one of those horrible, wet festivals where everyone was caked with mud and with the distant boom of the bass it felt like we were trying to survive on the Somme. It was hell. We dropped the price to five pounds and I think we sold a hundred. I managed to sell most of the rest afterwards but there was still a substantial quantity that went to the charity shop.’

More recently, Ian took several months off from illustrating in order to explore Dorset in greater depth by bicycle, on foot and in a kayak. Initially it was for a magazine project. That turned into a website, then a blog and eventually saw the light of day as a book, Insider’s Dorset. 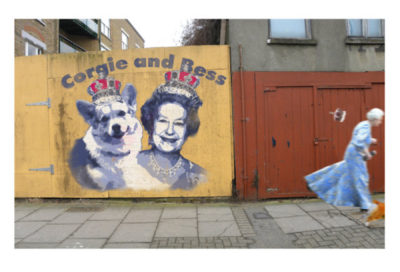 Among his highlights are walking around Cerne Abbas, discovering wooden winkle shells in a field near Ringstead Bay, kayaking in Poole Harbour and a cycle route from Grimstone to Sydling St Nicholas, on which he found a re-made stone cross and several memorial cairns.

‘I’m not in the least bit sporty, I’m a leisure cyclist and it’s the same with walking and kayaking,’ he says. ‘They are slow pursuits for pleasure. You can see much more when you take your time, so for me cycling involves stopping for a flask of coffee sat on a church wall and speaking to people. I took a week off to stay in North Dorset and properly explore it and I can’t wait to go back and do it again. The idea of getting my head down and pounding the road for miles is cycling without joy as far as I can see.’

And who could argue with that?