Elvis Costello and the Attractions with the Royal Guard Horns – Party Party (A&M, 1982) 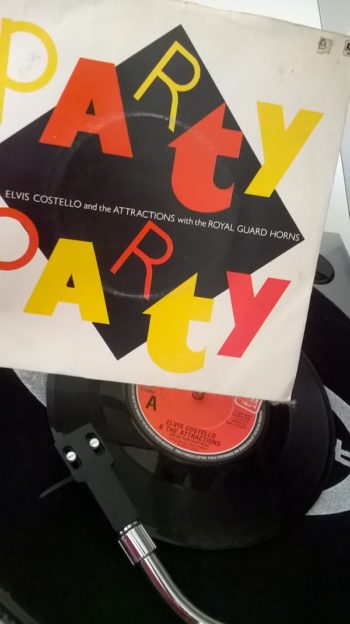 Elvis himself declared this his “worst song” and has now pretty much disowned it, even going as far as fighting its inclusionon a box set replicating all his original UK singles on CD. Is it that bad? Well, when you’re Elvis Costello maybe it is – the knees up rhythm, tin tack piano, forced bonhomie is probably not the preferred setting for a lyrical couplet as testing as: “So you think you’ve aged ten years tonight and still never been kissed / So you overdose on aftershave and try to slash your wrists.”

Then again, there is a whole verse rhyming the surnames of great artists and probably pop music’s only recorded use of the phrase “Wednesday legs”!

In an interview Elvis called the song: “Total crap! There was one reasonable line in it about the interior design being by Picasso. You know when you’re at a party and you’re drunk and you start to marvel at the weird wallpaper? But the rest of the song was fucking nonsense. So was the film.”

More intriguingly, for such a throwaway a-side, the flip is the beautifully honed title track from the superlative Imperial Bedroom album recorded with Beatles’ studio engineer Geoff Emerick that marked EC’s return to pop after the Nashville sojourn for Almost Blue. The Royal Guard Horns, by the way, were pre-eminent sessioneers Annie Whitehead and Gary Barnacle.