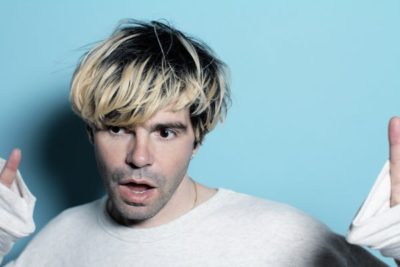 One of the sweetest, most unassuming rock ’n’ roll front men – at least he is these days – you’re likely to meet Tim Burgess, lead singer of The Charlatans, made his Bournemouth debut on 26 February 2013 with a free acoustic set at Café Boscanova in Boscombe ahead of a solo show at the Old Fire Station that night.

The café was rebranded as Tim Peaks, the virtual coffee shop that grew out of Burgess’ Twitter activities, as Tim and Charlatans’ guitarist Mark Collins ran through a couple of classics as well as songs from Burgess’ solo album, Oh No I Love You.

Tim Peaks sells coffee and merchandise in aid of the David Lynch Foundation, a mention of which gave Tim all the more reason to field a few questions…

Rock stars, coffee shops, cups of tea… what the hell is going on with Tim Peaks?

It started off as an innocent tweet. I’d started a Twitter account and wasn’t sure what to do. I could see people were following me so one morning I asked if they all fancied a coffee – lots of people replied and it escalated from there.

It was only a metaphysical metaphorical thing for a while – just each morning, tweeting a few songs, letting people know what was going on. Thousands more people started following me on Twitter, BBC 6Music asked me to do a couple of shows and were asking about the Twittery coffee thing. We had to give it a name so Tim Peaks was born. Someone designed a logo, we made mugs for a charity called Trekstock [supporting young people with cancer] and 500 were snapped up in the first month.

A chance came up to do a venue at a festival and the whole thing became real. One last piece of the jigsaw was to get an actual Tim Peaks coffee – we worked with a coffee blender and the people from Fairtrade. We never set out to do it for money so we thought we’d give anything we made to the David Lynch Foundation – we’d kind of borrowed the name from David Lynch so it was a bit of payback. Everyone loved the coffee and we supply shops, bars and music venues around the country. We’ll be taking it to a few festivals in the summer. I think that just about explains it, it sounds odd when you say it out loud.

Digital technology had drastically altered your industry – it seems like a case of adapt or pack it in. How swiftly did you take to social media, were you a natural digital communicator?

I’m not sure about whether I’m a natural digital communicator but maybe it’s the fact that the landscape of music has changed so much. When I was first putting records out, it was all via labels with PR companies looking after releases. Now there’s something instant – last week I was sent the final version of a song [‘Ours’] I’d done with an Italian actress called Asia Argento. Within an hour it was on Soundcloud and then Asia tweeted it to 80,000 people and I sent it to 55,000.

Nobody else was involved yet it was played on radio stations round the world who’d only just heard it. There’s a freshness to that that I love. It’s not social media itself that’s so fantastic, it’s who it puts you in touch with. You follow who you like on Twitter so it’s almost like your own newspaper that you’ve designed. I’d say I enjoyed communicating with people and in 2013 a lot of it can be done easily via places like Facebook.

The virtual world has changed the way we get music, how we interact with it, have they been easy changes for you?

I think we’ve adapted to them pretty well. We were one of the first bands to give away an album [‘You Cross My Path’] and we’ve always thought about what’s possible. Labels have really suffered and there’s a lot less money around – music can be shared and downloaded without being paid for.

At one time a band would spend a six-figure sum on a video. I shot my last one on my phone. I’m too optimistic to think that things are worse. They are just different. It’s definitely worth trying to keep up though.

Tiny venues and impromptu afternoon acoustic sets, do these Tim Peaks shows like going back to your roots?

Not really. The Charlatans really hit the ground running so we’ve never done tiny venues. Mark and I did an acoustic tour a couple of years ago so we worked out some different versions of our back catalogue.

We liked it so much that we recorded an EP of the songs – so much more back to our recent past than our roots, but either way it’ll be good to do. I’ve not spent much time in Bournemouth so it’ll be good to get down there for the whole day.

Was it time for a country-flavoured solo record?

I’m never sure what it’s time for, I just know what I’d like to be doing. It was recorded in Nashville so some country elements sneak in. I wrote it with Kurt Wagner from Lambchop and we joked that because of where I’m from and where he’s from we’d end up with Country and North Western music!

It’s funny but it depends what your definition of country is. I’m sure some of the guys in the ten gallon hats outside the Grand Ole Opry would maybe say it was pop music.

It’s all a question of perspective, what you normally listen to. The songs have been played on XFM which lots of people would think of as an indie station and 6Music and Radio 2 have played them too. Maybe it’s country music for people who don’t listen to country music. I think record shops should have a section called that.

‘Oh No I Love You’ is quite different to your first solo album, will the next one be different again? Will there be a next one?

It’s nine years different, which is a long time. Lots of things happen in your life and the world changes around us all the time. The album only came out in October and we’re playing the gigs and some festivals so there are no plans being made for the next album.

I’ve got a label, O Genesis, we’re busy releasing records – we’ve released The Vaccines and Ian Rankin and lots of exciting new bands. I tend not to make plans too far ahead, but there’s so much going on there’s no room in my head to be thinking about the next solo album. We’ve done a remix album of all the tracks that’ll be out on Record Store Day so in a way that’ll be my solo album – different remixes and versions of ‘Oh No I Love You’.

How do you know the difference between a Tim solo song and a Charlatans song?

With ‘Oh No I Love You’ we started right at the beginning – we only used ideas that came up once Kurt and I started discussing it and the songs started to form.

We work on The Charlatans’ songs as a band. Mark and I work well together and get some ideas. Tony, Martin and Jon bring what they’ve done to the studio and we build things up from there.

It’s more about the time when the songs are written more than what they sound like.

I’m guessing your life has been fairly tightly planned for the last 20 years or so, does something like Tim Peaks allow you to be a bit more spontaneous, instantaneous even?

You’ve never been in a band if you think it’s all tightly planned. We’ve never had a plan – it’s true that we’ll make an album and play some gigs, but how long that album takes, how successful it’ll be and what the reviews say is totally out of your hands. I’ve always kept a degree of spontaneity to what I’ve done. I’d produced a few bands and once the songs were recorded my involvement was over.

I kind of liked the idea of working on artwork and seeing if we could get them played on the radio so, fairly spontaneously, and with a few friends, I set up a label. The Tim Peaks stuff is definitely different, but not really more instantaneous. The whole thing is for me.

Rooibos tea and Tim Peaks coffee – depends on what time of day. I’m a fan of both –  soy milk in the coffee, none in the tea if you’re putting the kettle on.

What keeps you going?

The idea of working with people like Kurt Wagner, Asia Argento and Anton Newcombe. Making an album is a fantastic thing to be able to do and then to play those songs at gigs is just about the best thing I can imagine.

I love everything we do with The Charlatans, but last year I put a band together to play this album live – I asked Duffy from Primal Scream to play keyboards and it’s brilliant being on the road with him. Mark Collins would always be my first choice of guitarist so he’s in the band too and Finn, Toby and David who play bass, drums and guitar are all from Hatcham Social, the band who are supporting us.

Every year is different – I was offered a deal by Penguin a few years ago to write my autobiography, that’s something I’d never considered but I started to make notes and it just kind of happened. It’s been nominated as Best Book at the NME awards. Those sort of things keep me going. Even just going to a gig and seeing an up and coming band makes you realise there’s such vitality to music. You go home with loads of new ideas.

Some of your contemporaries have disappeared, some have gone away and come back, a few of them with massive pay days, if you had your time again would you do anything different?

Definitely not. I suppose anyone who’d worked doing something for more than 20 years would have seen their contemporaries have success, hard times and everything in between.

Looking back and wanting to change things is something that is open to everybody and I’ve had some amazing times, met and worked with some brilliant people. Changing something way back might have an affect on everything else that’s happened.

I’m healthy and happy and I really enjoy what I’m doing at the moment, so I’d not change a thing.

What’s going on with The Charlatans?

Mark and I spent a week writing together just after Christmas and we’ve talked about the next album – not much more than that at the moment.